Iconography: The Woman No One Saw | Bitch Media

Iconography: The Woman No One Saw

I hate to do this, but I'm going to kill a lot of the wonder of James Tiptree, Jr. right from the start.

In the late '60s and early '70s, there emerged a man of mystery on the US feminist science fiction scene. He was painfully modest, staggeringly talented, and reclusive indeed. His love story for planet Earth, "The Last Flight of Doctor Ain," shook everyone up, and then the beautifully wrought writing just kept coming out of that postbox in McLean, Virginia: "Love is the Plan the Plan is Death," "Painwise" and "Houston, Houston, Do You Read?". Stories about instinct and endurance, stories about the far future and the search for home. There were rumors flying right and left about who this guy might be. He was a spy! Henry Kissinger! A woman! And, as it turned out, though nobody could believe it, the rumous were right on the last count.

As I said, I hate to kill the wonder. I really would have liked to have been given the chance to read Tiptree before I learned about who she was myself. It must have been wonderful to have read this man who understood feminism so well, someone who got it. But to not tell you about who she was would be to dishonor the legacy of this rather extraordinary human being.

Dr. Alice B. Sheldon was many things in her life: a wife, a painter, a CIA operative (yes, kind of right about the spy thing, too), a clinical psychologist, a chicken farmer. She came to writing relatively late, after a rollercoaster time in the shadow of her writer mother, Mary Hastings Bradley, a destructive first marriage, post-war work in Poland for the US Army and seemingly every experience known to humanity. Somehow one expects the writing to be the most interesting thing about a writer, and I can't begin to communicate how extraordinary it is that Sheldon's life and writing vie for that place.

In my part of the world, and even in Tiptree's native United States, her writing is all too rare, so I'm linking to some of the stories that are available online online. I'm something close to appalled at how this extraordinary body of writing has all but disappeared. You hear stories about how the golden age of science fiction was gone by the fifties, how the 70s was a wasteland. Yet at that time Tiptree was one of the hottest writers going, and deservedly so. William Gibson is often held to be the founder of cyberpunk, but he cites "The Girl Who Was Plugged In." It's a very particular investment in science fiction that perpetuates its image as the domain of white men, where a lot of its best writers have been otherwise. Tiptree's reputation, so integral in instigating questioning of this status quo, has suffered for it. Happily, there has been a resurgence in Tiptree fandom of late, largely thanks to the efforts of the Tiptree Award organizers. And so:

"The Women Men Don't See": One of the most finely crafted short stories you're ever going to read. You have to read beyond the perspective of the racist, misogynistic narrator to find the true story and protagonist. It's about two women who choose to align themselves with the aliens when patriarchal Earth becomes too alienating to bear.

"The Screwfly Solution" is a feminist horror story to a T. The last line will scare you to pieces. It's completely brilliant, but about an epidemic of femicide coordinated by a cult, so be warned.

"The Girl Who Was Plugged In" is, as I said, the first cyberpunk story. It's about celebrity and consumerism and love stories gone horribly wrong. It's mostly about being scared of the monster, and the figuring of women's bodies themselves as monstrous.

"Your Faces, O My Sisters! Your Faces Filled Of Light!" made me cry. It'll give you hope and take it away, mess with your ideas of reality and illusion and (in)sanity. The ending is violent, so be warned. This was originally published under Sheldon's female pseudonym, Raccoona Sheldon.

I love science fiction for its potential to imagine other ways of doing life, doing womanhood, society, humanity. Sheldon, and Tiptree, did this for so many people, even if she herself could never quite conceive of humans finding our way out of this mess. Her writing is the finest of testaments to the need to keep going, keep trying, keep imagining until we get somewhere better. Her writing is devastating and incredible, and I credit it with having made me a feminist.

Everything I write about Tiptree is indebted to Julie Phillips' biography. I can't tell you how thoroughly I recommend this book: if only once in your life you read a biography, make it this one. As for Tiptree herself, see if you can get your hands on a copy of her best of collection, Her Smoke Rose Up Forever.

Thanks for posting this, Chally! I've loved what little I read of Alice B. Sheldon since reading "Your Faces, O My Sisters!" in a feminist sci-fi/philosophy class. This post is a nice little reminder to go back and read the rest of her work, as well as the biography by Julie Phillips. Do you read the Tiptree award anthologies as well? They tend to have a lot of good stuff, and the yearly award winners (with authors ranging from Ursula K. LeGuin to relative newcomers Kelly Link and Shelley Jackson) are always perfect. If you haven't read it, Half Life by Shelley Jackson might be up your alley! It co-won the award in 2006. And Jackson's also put out a very interesting hypertext novel called Patchwork Girl (based on the Oz story), a fantastic exploration of the body and a reinterpreting of the story of Frankenstein.

I've got two of the award anthologies; they're pretty fab, aren't they? I've been meaning to read Half Life for a couple of years now, hopefully I will eventually.

i love tiptree too and i hope this helps more readers to discover her. i did actually read her first thinking she was a man--in an english class in college, the prof handed out a xerox copy of the story and we didn't know anything about the author. when she told us in the discussion about the pseudonym it blew our minds. now i'm teaching Dr. Ain in my classes and students find it (unfortunately) still very timely, given how little has improved in the environmental crisis since it was written 40+ years ago.

I'm so glad to here that; good for you!

Thanks for posting this. I started the biography knowing basically nothing of Sheldon/Tiptree's story, and I LOVED it. Fantastic book, fascinating and heartbreaking life. Then I grabbed up all the Tiptree I could, and so I can also highly recommend <i>Her Smoke Rose Up Forever</i>.

If you like Tiptree, check out Octavia E. Butler ...

My local library doesn't have any Tiptree! Which makes me wonder...is her work well-known outside of the US? Any comment on her international critical reception?

Certainly I've been unable to find anything of hers in Australia: I ordered in my Tiptree books from the US. It's really frustrating that this amazing work is barely available... the thing about the US SF community in the 70s is that it was, ah, a bit insular. That said, Tiptree's stuff did have an international pull, it's just that SF culture was really centred around the US. Between that and the disappearing of her legacy (and that of other women in SF), it can be a bit hard to track her stuff down outside of the US. 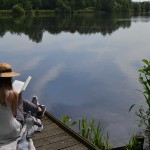 by Evette Dionne
There’s a memoir that’s funny as hell, a deep dive into an iconic comic book character, and even a fantasy.