This past weekend, we at Bitch were honored to be a community partner in Portland's Queer Documentary Film Festival's screening of FtF: From Female to Femme. QDOC is the only festival in the United States (and apparently one of two worldwide) devoted to queer documentaries, and FtF: From Female to Femme is – to my knowledge – the first feature length documentary that explores the experiences and identities of femme as a queer identity. This lack of femme analysis is a little alarming, considering the breadth and depth of analyses focused on butch, FtM, and other masculine(/queer) identities. But then again, as books like Julia Serano's Whipping Girl: A Transsexual woman on sexism and the scapegoating of femininity illustrate, femme identities and femininity in general continue to be misunderstood and maligned (and in some senses, masculinity so fetishized), so it also makes sense.

I admit I was skeptical when I first heard about FtF a few years ago. The title seemed to be appropriating langauge of trans identities and experiences. And indeed, during the Q and A with Kami Chisholm, one of the filmmakers who was at this weekend's screening, the title has sparked some controversy, particularly from trans-identified folks.

And while I'm still not completely convinced of the appropriateness of the title, witnessing several articulate, passionate femmes (including actress/writer Guinivere Turner, novelist/activist Jewelle Gomez, poet Meliza Bañales, and musicians Leslie Mah and Bitch) explain that it is/was very much a transition for them, a crossing over into another gender/sexual identity, I have a stronger appreciation of the title, not to mention a clearer understanding of the struggles and hostilities faced by those who identify as femme.

As for the film itself, I thought it was a useful and much-needed addition to the conversation, but I also felt like it was lacking in many ways. There was a lot of focus on burlesque, as if femme identity and burlesque are synonymous. Are they? Is an element of performance (and sometimes parody) an essential component to femme identities?

What about the history of femme identity? What kinds of organizing around femme identities is happening? How is this identity situated in queer communities? Are discussions and cross-alliances happening between other radical identities? How can femme identities challenge and resist mainstream and (especially) queer assumptions about gender, sexuality, femininity,
and identity?

And how do we overcome the very real challenge of creating a liberatory framework and space when we're all coming from different histories, socialization experiences, identities, perspectives...?

See the trailer for the film here (for some reason, it wouldn't let me embed it into this post). And if/when you have the opportunity, see the film itself – it definitely opens the doors for further conversation.

Thanks to the Russ Gage and David Weissman at QueerDoc for inviting us to be a community partner!

p.s. The title of this post is a quote from a professor being interviewed in the film, who explained the importance of remembering that femme doesn't exist only in opposition to butch; it's its own identity. She followed that statement by joking, "If a femme falls in the forest..."

I haven't seen the movie... But as someone who is sort of femme, i dont think there is too much of a femme history/cohesiveness. There is butch/femme, where femmes celebrate 'their butches' and there is the whole no-no of looking/acting/liking things that are too straight, or at least not lesbianish. so, it's a very hidden identity. I also know a lot of women feel pressured to change from a more femme aspect to more 'lesbian' in order to fit in. :(

I was in Portland a few weeks ago, and remember a scathing review of this movie in The Oregonian.

<p>Thanks for the heads-up.  The link to the <a href="http://www.oregonlive.com/movies/oregonian/index.ssf?/base/entertainment... target="_blank">full write-up on QDOC is here</a>. Below is the specific review of FTF. </p><blockquote><p>&quot;FTF: Female to Femme&quot;: After seeing the real oppression experienced by those trannies in Iran in &quot;Be Like Others,&quot; this film about lesbian subculture is downright irritating. Femmes are lesbians who embrace their femininity by wearing dresses and high heels and putting on makeup, and that makes them outcasts of sorts to butch lesbians. The femmes here talk about their fear of being flamboyantly feminine, and scenes of a femme support group are so ridiculous that they border on parody. Is it really an act of courage for a woman to buy and wear a push-up bra?  </p></blockquote><p>Harsh words, which partly encapsulate the hostility directed toward femmes in queer communities. I think the questions asked are legitimate and worthy of further exploration, which is why I think this film is a good step in opening up the conversation.  </p>The support group was indeed intended to be a parody, but maybe that wouldn't have been obvious had I not read the press materials before watching it... 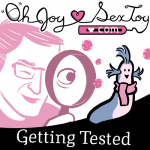 by Erika Moen
Oh Joy Sex Toy is a weekly comics series that graphically explores sex and sexuality. This week: getting regularly tested is part of being a considerate, responsible sexual partner.