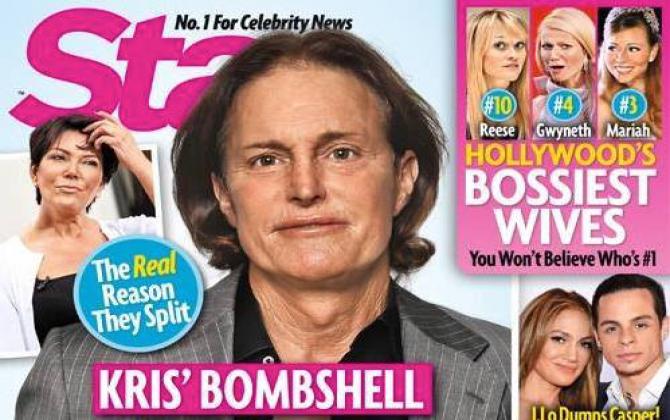 In the past week, speculation about Bruce Jenner’s gender identity—and the likelihood of his transitioning—has migrated from the realm of TMZ and Perez Hilton to more reputable outlets like USA Today and the New York Times.

While neither Jenner—the actor and former athlete who in recent years is best known for being the stepfather of Kim, Khloe, and Kourtney Kardashian—nor any member of his extremely famous family has said anything publicly to confirm the fact, an internet consensus has been reached that an upcoming interview with Diane Sawyer will outline his personal journey to transitioning. Likewise, it’s said that he’s filming a “docuseries” about the process for E! television. Just these anonymous statements, from sources close to the family, have changed the tenor of coverage around Jenner and led journalists to worry openly about how a tabloid fixture will be treated.

The concerns seem valid. Speculation about the former Olympian’s gender identity first flourished in 2013, upon his separation from Kris, the Kardishian matriarch. Tabloids and online gossip sources quoted “insiders” who talked about Jenner’s desire to be alone with his femininity, and speculated—in a mocking, transphobic way—that he owned more dresses than his wife. This talk experienced a second bubble in early 2014, when it was revealed Bruce had gotten a tracheal shave. This procedure is sometimes sought by trans women, as reducing the Adam’s apple can be seen as feminizing, and helpful for those who seek it in lessening dysphoria. The operation is almost unheard of for cis men, however, and Jenner’s explanation that he “just didn’t like (his) trachea” seemed highly unusual.

It wasn’t until recently that Jenner’s story left the orbit of gossip and entered that of social justice, though. Last November, daytime host Wendy Williams commented on Jenner’s appearance in a way that many people called out as transphobic:  Williams said his visage was potentially harming his children. Her statements, which she later attempted to clarify, were condemned by GLAAD and others. Last month, In Touch magazine ran a photoshopped cover featuring Jenner in makeup and the headline “My Life as a Woman,” which was likewise roundly denounced. 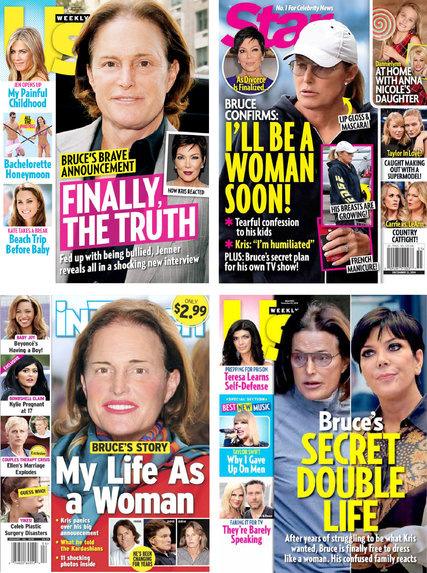 Jenner’s peculiar place in the cultural firmament complicates his story immensely. As a figure in the Kardashian clan, he is almost reflexively scorned. The family is widely suspected of inventing and orchestrating their personal lives for public consumption, such as when Kris’s daughter Kim’s married and quickly divorced NBA player Kris Humphries, a practice that leads media onlookers to respond to nearly all they do as though it’s a publicity stunt.

If Jenner is transgender, however, his transition is not only genuine, it places him within one of the most stigmatized, oppressed identities groups in our culture (because Jenner has not indicated by which pronouns he’d like to be referred, for this article, I’ll default to “he, him, his”). Due to the almost wholly negative treatment transgender people have received in our country’s history until very recently, it’s almost impossible to joke about trans folks without seeming to reinforce transphobic attitudes. Thus, we find ourselves in a loop: tabloids, out of habit, make fun of Jenner, but because the jokes target his perceived identity, trans people and our allies rightfully object.

This dynamic popped up in an unexpected place last week, when Transparent showrunner Jill Solloway unadvisedly posted on her Facebook a parody of her show’s poster with Jenner and the Kardashians substituting for her actors and the title changed to Transdashians, saying, “I couldn’t not. Someone sent it to me. Tell me it’s wrong and I’ll take it down.” She was quickly flooded with complaints, and removed the image, issuing a lengthy apology, in which she wrote, “As a cis woman I will never know what it is like to be trans. I acknowledge the hurt and pain of the trans community and welcome their feedback. I made a mistake; it was horrible judgment. My complacency is checked and it won’t happen again. Please accept my apology.”

In explaining her indiscretion, Solloway, who’s been a steadfast and vocal supporter of the trans community explained she was “a long-time Kardashian fan and reality show obsessive,” showing how even the most conscientious media creators are liable to become entangled in the various threads at play here and hurt those they’ve sought to support.

It’s hoped that if Jenner himself clarifies his identity and asks to be treated with dignity, the jokes around this aspect of his life will cease. The Daily Beast’s Kevin Fallon has already noted with pleasant surprise the way US Weekly and TMZ’s coverage has changed in the past few days. Fallon, however, as a veteran of celebrity media, also expressed some dread at how the mechanics of the field will likely lead to sensationalizing every aspect of Jenner’s journey.

The trans woman community has enjoyed the great fortune in the past year of being represented publicly on national TV by Laverne Cox and Janet Mock, who, in their eloquence, poise, and sincerity, have been true ambassadors for trans people. The two had the advantage of becoming public figures years into their transitions, when each was well-steeped in the movement’s concerns. It’s unfair to expect such expertise from Jenner, but it does lead one to wonder what viewers will find in Jenner’s purported docuseries. Will it be a rehash of the types of outmoded cliches and tropes the media loves to trot out about “being trapped in the wrong body”? Will it be filled with unending montages of Jenner applying makeup and painting nails, a stereotype derided at length years ago by Julia Serano?

As a trans woman, part of me fears as much. The trans community has made great strides in the past few years, in terms of visibility and understanding. The issues facing us, in terms of discrimination, health care, economics, and more, are serious, and have begun to be taken seriously by society at large. For that reason the thought of a “Kardashian transition” gives me pause.

At the same time, I realize that those worries are my problem, and that true trans equality means making space for every trans person to live out their own story. Perhaps Jenner will become a great trans spokesperson; perhaps he won’t. The expectation that every trans person “explain” their gender is a cissexist one in itself. How often is a cis person called upon to explain theirs?

In the end, Bruce Jenner’s gender is his business, and, if reports are true, he’s about to share it with everyone who cares to watch. My hope is that those in the Kardashian-watching tabloid business will be on their best behavior. But they’ll make mistakes nonetheless, and that those who call out such mistakes will be right there to do so when they happen. It’s fascinating and exhausting, and it hasn’t even yet begun.

here's what i'm struggling with in this article: it's premise - jenner's transition - is still speculation - especially since the most compelling "evisdence" comes from gossip rags. there has been no confirmation or coming out moment, and so any speculation about what a reality show might be like is still pure speculation, and it's speculating about/questioning someone's gender identity, which i am not hugely comfortable with.

i think the worry about what jenner's public transition will be like can wait until we hear from jenner that it's going to happen.

Maybe because Jenner has /not/ indicated by which pronouns they want to be called--and since this article is feeding into the speculative nature of all this tabloid drama and further pushing it around, you could at least refer to them in neutral pronouns. 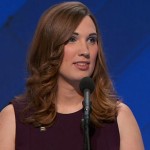 by Samantha Riedel
Even in the darkest moments, all of us can bear witness to acts of amazing grace.