In a Bizarre 1976 Comic Book, Spider-Man Fought the Villain of Misleading Sex Education

Last week, I came across a very strange comic book: in 1976, Planned Parenthood teamed up with Marvel to publish a one-off comic in which Spider-Man defends America's youth from misleading sex education. In the comic, Spider-Man stumbles upon a scheme by a slimy demon from the planet Intellectia to indoctrinate the nation’s youth with inaccurate sex-ed, creating a plague of unintentional pregnancies. The comic was apparently available nationwide at Planned Parenthood clinics for 25 cents a copy. I love both comics and sex education, but I'd never seen anything like this before.

While bad sex-ed is the villain in this tale and the comic busts the myth about how women can’t get pregnant the first time they have sex, the content of the comic differs from the messages Planned Parenthood promotes today. As you’ll notice, the comic doesn’t discuss the specifics of how to prevent pregnancy or STIs beyond just not having sex and using “some stuff you can buy at drug stores.” It also heartily shames teen pregnancy, as Spider-Man notes that teens who get accidentally pregnant will be nothing more than “baby machines” stuck in dead-end jobs. It’s definitely a time capsule of a certain era of sex-ed.

Read the thrilling conclusion of this Spider-Man comic via Retronaut or the University of Nebraska-Lincoln comics archive.

This comic seems bizarre, but it fits into Planned Parenthood's long history of using mass media to discuss birth control, using movies in the 1920s and even recording radio soap operas about contraception in the 1930s.

The Spiderman comic wasn’t the first time Planned Parenthood had used comic books to discuss birth control: Rose Holz, the Associate Director of the Women’s and Gender Studies Program at University of Nebraska-Lincoln and author of The Birth Control Clinic in a Marketplace World (2012) pointed to a comic called Escape from Fear, which Planned Parenthood published in 1956 and then reprinted in 1962. While the Spider-Man comic is focused on unmarried teens, Escape from Fear follows the story of a desperate married couple that can’t bear the financial burden of having any more kids. 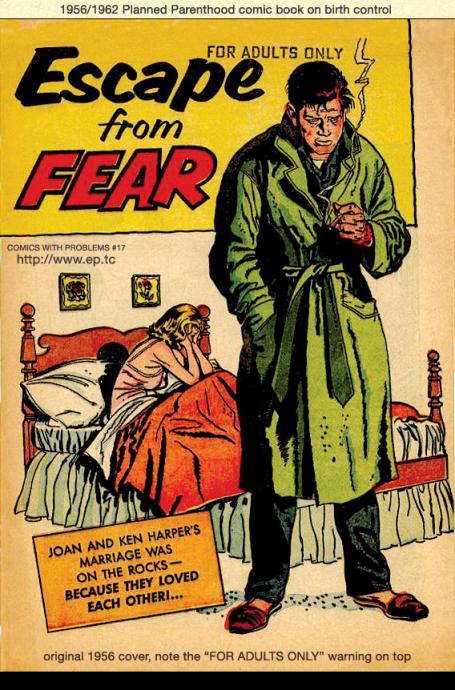 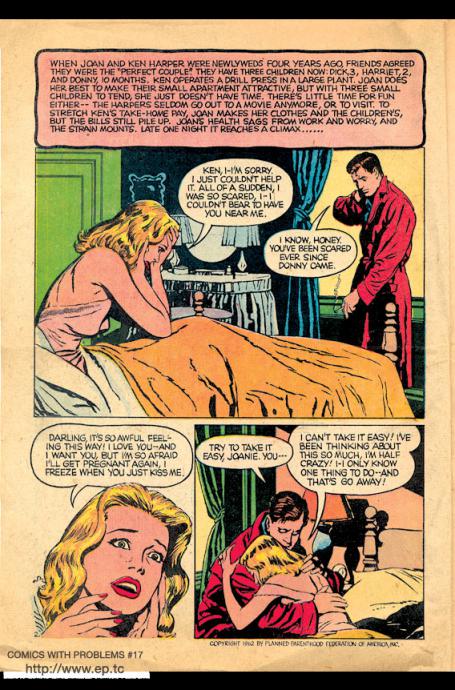 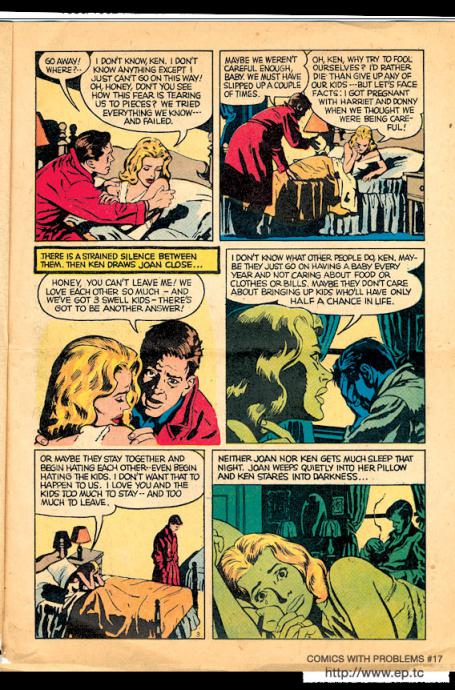 Read the rest of Escape from Fear at Comics With Problems.

“By the 1930s, the birth control movement had become more conservative from its radical roots. They tried to say that birth control is respectable and it’s only for married people,” says Holz. The Spider-Man comic shows a major change in Planned Parenthood’s target audience: “In the 1960s, they start to create educational pamphlets directly for teens. They’re pushing the boundaries on this, using a medium that’s known to be read by kids.”

The shift in target audience is interesting, but it’s also unusual to see that the comic was made in conjunction with Marvel. These days, it’s hard to imagine Marvel licensing one of their most popular characters for a comic about the evils of inaccurate sex education.

This Planned Parenthood collaboration is not entirely out of left field, though. In fact, says comics writer and critic Douglas Wolk, Marvel licenses characters for one-off comics like this all the time. “There is a division of Marvel that publishes custom comics for whatever clients want to hire them out,” says Wolk, who points out that the artists of this Planned Parenthood comic, Ross Andru and Mike Esposito, were also responsible for drawing and inking the actual Spider-Man series at this time.  Wolk notes that there are hundreds and hundreds of Marvel and DC titles made for corporate clients, government agencies, and nonprofits, including even a series of proselytizing Christian Archie comics. “There are enough examples of licensed comics that it seems like Marvel is willing to work with just about anyone,” says Wolk, though he thinks Marvel might steer clear of “hot potato” political issues like birth control today. Many kids who grew up reading Marvel comics in the late ‘90s will recall the eight-page anti-marijuana comic Fastlane, a project commissioned by the federal Office of National Drug Control Policy that Marvel inserted into thousands of comics. The University of Nebraska-Lincoln actually maintains a growing archive of government-funded comics, including gems like 1990’s Captain America Goes to War Against Drugs and a 1998 comic in which Superman and Wonder Woman fight for land mine awareness.  The basic fact here is that comics are great ways to engage readers in stories, so it’s no surprise that governments and nonprofits alike use them to promote their ideas to broad audiences.

For better or worse, Planned Parenthood has not kept up with comic book publishing—the national organization’s archivist says Planned Parenthood has not printed any comics in recent memory. However, educational sex positive comics have flourished online as other sex-ed organizations (and dozens of individual artists) have found comics to be a great medium for spreading information about sexual health in fun and personal ways.  It’s no web-slinging Spider-Man, but online birth control support network Besider made a series of comics-inspired graphics for Thanks, Birth Control Day last year and sex-ed nonprofit Scarleteen recently hired comics artist Isabella Rotman as an “artist in residence” to create adorable sex-positive comics. These days, comics artists seem more in the habit of promoting healthy personal approaches to sex than combating the wily demons of distant planet Intellectia.

Author Sarah Mirk is the online editor of Bitch and a lifelong comics fan.