In a New Documentary, Comedian Tig Notaro Laughs in the Face of Breast Cancer | Bitch Media

In a New Documentary, Comedian Tig Notaro Laughs in the Face of Breast Cancer 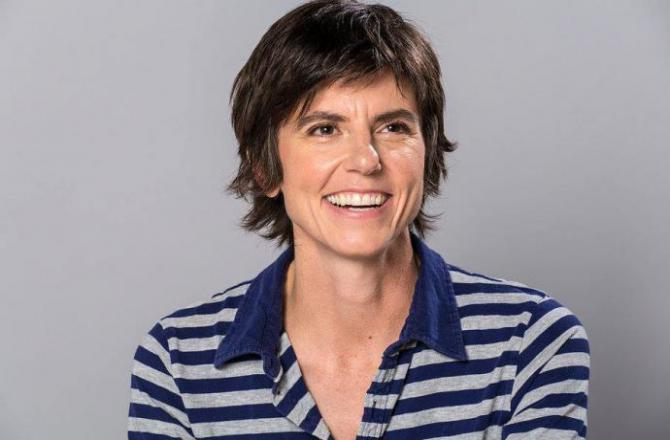 Having worked since the late '90s as a stand up and finally reaching a level of professional success that led her to begin thinking of having children, she was stricken with an intestinal disease that landed her in the hospital.  Shortly after being released from the hospital, her mother died. Though this death was followed shortly after Tig’s breakout performance on This American Life—involving a routine about '80s singer Taylor Dayne—it was compounded on July 30 later by the terrifying news that she had cancer in both breasts. 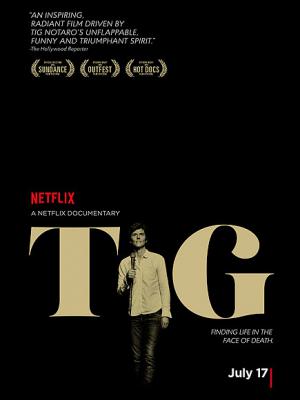 Devastated, Notaro still kept a stand-up gig she'd booked on August 3 at L.A.’s club Largo. The performance turned out to be a breathtakingly honest set. She entered the stage and announced, “Good evening. Hello. I have cancer.” The raw routine made headlines nationally and earned rapturous praise from Louis C.K., among others.

The twists and turns of that time sound like something from a movie—and now they actually are. Tig, a documentary that summarizes this painful, heady period, and follows Notaro as she pursues a new romance and struggles to create new material in the run-up to her one-year anniversary performance at Largo.

Tig, which begins streaming on Netflix July 17, is moving when covering Notaro's health struggles and captivating during its performance scenes, particularly those from the first Largo show. It is also exciting to have a film dedicated to highlighting the life and work of a comedian whose work is often outside the mainstream spotlight—Notaro’s often-dark comedy often delves into vulnerable areas where few other comics dare to tread. Instead of jokes about dating and kids these days, Notaro literally makes jokes about life and death. But the documentary also occasionally feels stagy and unfocused in ways reminiscent of a reality show.

In Notaro’s famous Largo set, people laughed when she introduced herself by announcing she has cancer. But as she continues to repeat the assertion, (“Is everybody having a good time? I have cancer.”) the tone of the room shifts. Her trademark laconic, deadpan delivery is perfectly suited for both the sense of disbelief she seemed to feel at yet another calamity in her life, and the need to share with an audience sincere feelings about facing an overwhelming reality.

The moment is such a peak in both her career and the film, that it's difficult for the rest of the documentary to resonate as strongly. Indeed, some of the most poignant moments come in the aftermath of the successful double mastectomy Notaro underwent, when we see Notaro swarmed by the rush of publicity her set attracts. When asked repeatedly how the event will change her material, she realizes she has no idea, drolly joking that she can't tour the country saying she has cancer.

Tig follows her rocky attempt to build a new set. Particularly interesting is the slow evolution of a joke about her mastectomy.  She tells audiences that her breasts must have contracted cancer in revenge for years of her complain on stage about being flat-chested.

The film also documents her relationship with actress Stephanie Allynne, whom she met while working on the film In a World …  The parts in which the two recount their courtship via text are charming. But other moments, where their relationship appears to be evolving before our eyes, have a creepy, “Why is there a camera here?” quality, that feels strangely voyeuristic given the gravity of the material that surrounds it. At the same time, Tig feels a little insular. The moments around her Largo performances have a sense of groundedness, perhaps because directors Kristina Goolsby and Ashley York interview others from the comedy world who offer context for Notaro's work and personality. For long stretches of the film, however, such as when Notaro recalls her early life, or pursues her dream of becoming a mother, it's just her followed by a camera crew, or being interviewed as a talking head. 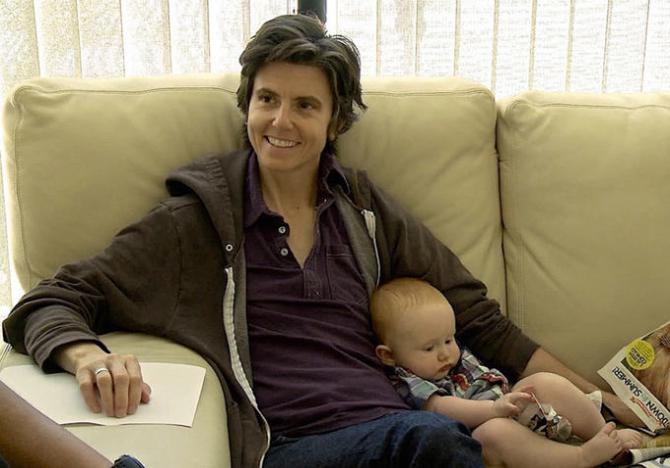 Tig Notaro in a still from the new documentary.

Notaro's recounting of her mother's influence on her life is quite moving, marking one of the few times the famously even-keeled comic becomes visibly emotional. A particularly telling moment comes when This American Life host Ira Glass recalls having talked to Notaro following her successful debut on the program. In discussing what she might perform during a follow up visit, he suggested she might talk about her bout with C. Diff and her mother's death. Glass remembers the comedian was quite opposed to the idea, given its extremely personal nature. Glass's anecdote helps underscore how astounding Notaro's “cancer” performance was, as she'd been pushed completely outside her comfort zone. A film that focused solely on the show and its impact, examining its place in comedy history (in a tweet immediately after, Louis C.K. called it one of only “a handful of truly great, masterful sets” he'd seen; Lena Dunham declared she was “Surer than ever about art's job #Tig #Tig #Tig”) might have given the viewer a richer, more unified experience. As it is, the film is deeply moving in some parts and uneven in others.  Mixing a life-threatening moment and an artistic triumph with the personally important, but inarguably more mundane experiences of attaining a surrogate mother and moving into a new house, however, can not help but feel imbalanced.

Tig Notaro fans and comedy fans in general will likely enjoy Tig for the exposure it offers to a comedy star as she pursues her life and finds her professional footing again. For all others, it will be more of a bumpy ride.

Watch the trailer for Tig: