In New Surreal Animated Film "Rocks in My Pockets," Depression is a Ghost | Bitch Media

In New Surreal Animated Film “Rocks in My Pockets,” Depression is a Ghost 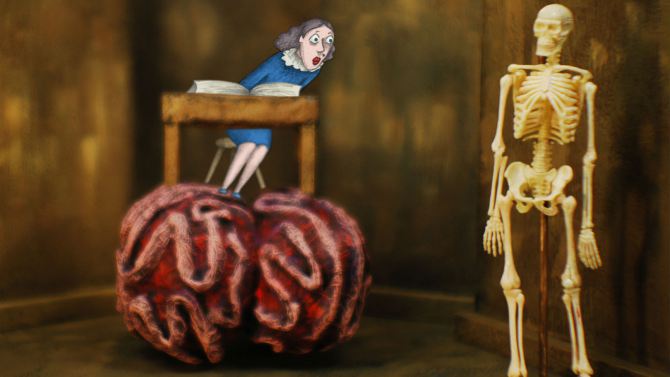 Delving into family history for the sake of entertainment is no easy task, especially when your family has as many skeletons in its closet as Latvian animator Signe Baumane’s.

Juggling themes of marriage, depression, pregnancy, and suicide, Baumane’s film Rocks in My Pockets—which opened in the United States this month—follows the narratives of five women in Baumane’s family. The film tells a funny and complex story in just 88 minutes, revealing a twisted story that speaks to individual madness as much as it does to the idea of collective spiritual and genetic experience.

Baumane kicks off the narrative by telling of her own morbid fantasies. She admits that she frequently thinks about hanging herself, but, she adds with a sardonic tone, she would want to do so in a way that would be the least bother to others. She goes on to describe the hard life of her grandmother, Anna, who feels like the real center of the film. Anna seems to have tried to drown herself twice but her children keep her actual cause of death secret. That mystery is a starting point for Baumane’s exploration of the depression, possible schizophrenia, and mental illnesses that haunt the women in her family, including, obviously, herself. 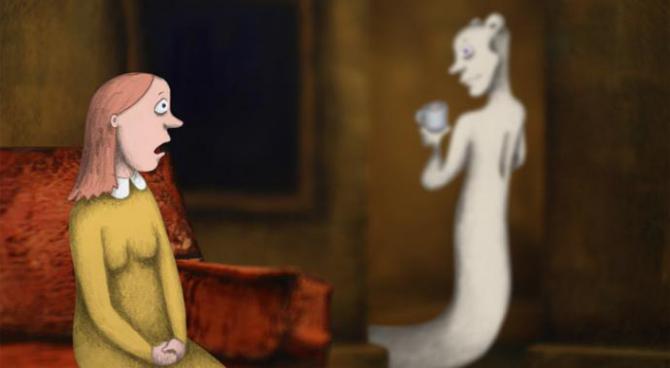 This haunting becomes quite literal with Baumane’s surreal animator’s sensibility: two figures, one a serpentine ghost an the other an ambiguous woodland beast, serve as spirits of death and of life to Baumane’s family. Nothing is what it seems in Baumane’s world, where the literal can easily turn morph into the symbolic or hyper-literal: a brain is split into quarters on a cutting board; a woman, one of Baumane’s cousins, is trapped in a medication bottle as her husband looks on; a horny older man becomes a blue hare in the bedroom of his wife; and so on. The film combines Baumane’s brand of charming, spare hand-drawn animation with textured stop-motion sets to create a stylized world that appears simple as it winds through difficult themes.

The absorbing animated world that Baumane created has an unfortunate feature: a thickly-accented, unchanging voiceover that distracts rather than adds to the story. Baumane always does her own voiceovers but what worked well in her earlier, shorter films is hard to handle over a relentless hour-and-a-half. There is no easy answer here. The narrative is so personal that it makes sense to have Baumane narrate the film. But the monotonous tone is nonetheless tiring.

Like her short films before it, Rocks In My Pockets is a fiercely feminist work. It challenges the notions that women should be bound by the force of tradition or other social pressures to marry and produce children. Additionally, the film looks at and addresses the general history of psychotheraputic misdiagnosis and over-medication for women, examining how the practice has changed in drastic ways over several generations. Baumane keeps her story person, not doing in for direct analysis on mental health diagnosis and treatment, but her criticism of the system that has both hurt and aided her family and friends is crystal clear.

While exploring the history of mental illness in her lineage and herself, Baumane uncovers many truths about depression, but offers little in the way of comfort or discussion of viable solutions. It is perhaps not her place, as an artist, to give them to us. Maybe it’s not our right as an audience to ask so much of anyone who is putting their personal journey into film. But without a solid conclusion one way or another, the film feels like a resignation to a disease, and doesn’t give a signal as to what we, as an audience, are to take away from what we’ve seen.

Rocks in My Pockets is a deeply personal film, from concept to execution, and it shows. Though its story wanders and its narration can be grating, it does fearlessly address the taboo with dark humor and an unflinching stare. By tracing her own suicidal tendencies back to her grandmother, Baumane offers a varied, tragic look at a group of strong women who share more than they could ever imagine. It is a mark of Baumane’s strengths both as an artist and as a person that she been able to craft us this gift of such a bold, raw piece of work.

Watch the trailer for Rocks in My Pockets and check out this list of screenings around the United States this fall:

Zoe Chevat is a writer, animator, and illustrator who attended the CalArts MFA Program in Film and Animation. In addition to writing for Bitch, she also contributes to TheMarySue.com. Follow her on Twitter @zchevat.