Say hello to the Radical Brownies, a troop of a dozen East Oakland girls who are learning about the merits of activism. With a tip of their brown berets to the Black Panthers, the original Oaktown social justice warriors, the Radical Brownies have ambitious plans to revolutionize their community.

Co-founders Anayvette Martinez and Marilyn Hollinquest started the group for 8-12 year-old girls late last year with the aim of having a Girl Scout-like group that would be focused on social justice. Both Martinez and Hollinquest are queer women of color who each have over a decade of experience working with LGBTQ youth and young people of color, though Martinez has no personal experience with the Girl Scouts or old-school scouting.

The Radical Brownies “all came about organically” last year, says Martinez, spurred on by her fourth-grade daughter Coatlupe’s desire to join a young girls’ troop. “As she was blooming into a young girl of color, I watched her begin to navigate her identity and growth,” Martinez said.  “I saw the need for a group that would empower and encourage her to form bonds of sisterhood with other girls in her community. I began to imagine what a radical young girl’s social justice troop looked like, a group that centered and affirmed her experiences as a beautiful and brilliant brown girl against so many societal pressures to conform to mainstream ideals of girlhood.”

Today, Coatlupe is working toward her second Radical Brownies badge, this one in Radical Beauty. The youngster has a keen awareness of how stereotypes around beauty negatively her—Coatlupe told me that Radical Beauty is about “loving the skin you are in and ignoring commercials that say you need certain products to be beautiful when really you are beautiful just the way you are.”

Since the troop’s debut, they’ve received a ton of positive media attention (and some nasty critics, of course, like one person who described the troop as “future Marxist agitators”). On January 22, the Young Women of Color Leadership Council wrote to the Radical Brownies in an open letter, “Many of us grew up wishing we had something like what you have created and are so happy to see you forming this sisterhood. We know that sisterhood is radical and revolutionary and can see the love and support you have for one another in ourselves as well.” I sat down recently and talk with Martinez about all these issues. 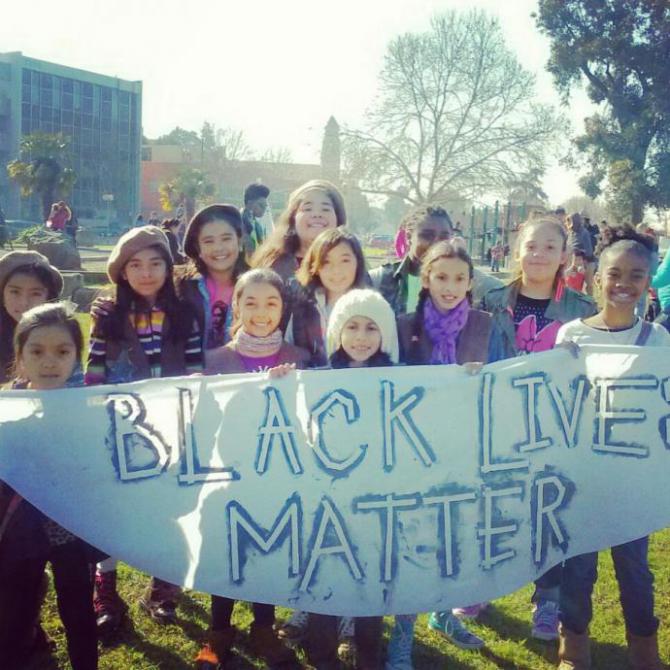 ANAYVETTE MARTINEZ: The major difference between Radical Brownies and traditional scouting is our focus is really centered around social justice, activism and empowerment in a very politicized, edgy way. I realize social service is a part of other kinds of girl troops. But the first badge Radical Brownies could earn was for participation in the Black Lives Matter protests. We have an outline for a six-month thematic curriculum, but as things happen in our world, we will shift.

What would you say to people who think eight years old is too young for girls to be politically active?

We are never too young to learn about these issues.  Children are a lot more aware of the “isms” that exist in our society. And I think the sooner we start having these conversations and give children the language, the articulation, and a state to be able to process that, the better.

Do the girls agree about all the issues?

Oh no. There is a good variance.  Not all the girls have the exact same ideas and opinions, which I love.  I love seeing them challenge each other, to discuss and talk from personal experience and their families.  There is definitely variance in the group.

How big is the troop now?

We have 12 girls in this troop.  The number one thing for us to deal with right now is the fact there so many other girls who want to join but we are at capacity.  We decided on 12 because Marilyn and I have done a lot of youth development programs and we knew we didn’t want to start off with a troop that would be too big or two small in case there are girls who have to drop for whatever reason. Twelve felt like a good number.

What happens when the girls turn 13 years old?

We haven’t figured out what happens as the girls get older, what should be the next step.  We are still formulating how are we going to tackle the different troops at different levels.  We are still figuring that out. We are definitely looking towards scaling up. This is our first year and we are being really intentional about how we build a strong foundation.  This is our incubation year, we are really focused on our culture, such as what does a Radical Brownie look like, as we build values for young women.  The vision is to scale up and support other chapters starting. 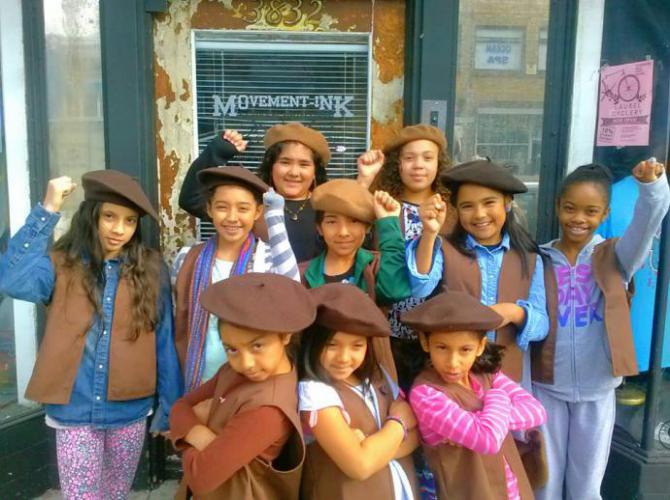 Do you have funding sources?

We haven’t been focused on fundraising as of yet because we are so new.  But the minute people started hearing about us everyone wanted to support us, which was fantastic.  Right now we are not accepting cash donations because we are in the process of our developing a fiscal sponsorship, so until we get fiscal sponsor status, we are not accepting cash donations.

For example, we considered some of the things the girls could use, and we decided bull horns would be great, so when we are at actions their voices can be heard and not get lost in the crowd. They could even lead chants at demonstrations. So someone donated bull horns.

Why do you think there’s been such a positive response to Radical Brownies?

I think we are definitely at this politically charged moment with the Black Lives Matter movement. I think that the response speaks to a need for young girls of color where they can develop and be empowered and take action towards all these things that are happening around them.

How are the girls handling all of the media attention?

The girls think it’s awesome.  They ask “are we famous now?” We did a radio show a couple of weeks ago and they loved it. They really enjoyed the attention. The majority of them are extroverts. We have a couple a little bit more introverted, but we have seen them come out of their shells in his whole process.  It has been amazing.

What’s the story behind the brown berets all the girls wear?

It’s our way of paying homage to the Black Panthers who were very active in the social justice movement and community organizing in the Bay area back in the ‘60s and ‘70s. We stick to the notion that we are not the first and we’re not the last. These little girls are part of a legacy of social activism which has always been really prevalent in our community. We definitely talk to the girls about the history of activism in Oakland.

There seems to be a misconception that no white girls will be allowed in Radical Brownies.

This troop came out of our local community, in East Oakland which is mainly comprised of black and brown girls, so that is what you see reflected in our troop. Definitely, is about centering young girls of color experiences which are exclusive to young girls of color. As we expand and support other chapters opening, the group will be open to any child﻿ who identifies with our mission and vision.

What can we expect to see from Radical Brownies in the near future?

Look out for us at your local marches. These girls are active and want to be out there, having their voices heard. We are just getting started.  One of our hashtags is #staywoke. It’s very fitting because I think there is so much more to come.

Robyn McGee is an educator, freelance writer and author of the book Hungry for More: A Keeping it Real Guide for Black women on Weight and Body Image (Seal Press 2006). Catch up with Robyn at www.writerswhorock.com and follow her on Twitter @LadiesWhoHowl. Photos of the Radical Brownies are from their Facebook page.

These girls make me feel fantastic about our future.

As a future secondary education teacher, and current women's studies instructor, I LOVE that this brand of activism is starting so early and that there has been such a success with these twelve young women. I live in a rather rural, conservative state, in a county where there are no GSAs or GLSTENs at the high school level. My goal as a secondary ed. teacher would be to assist in the creation of something similar at the middle school or high school level. The challenge that I foresee is that a lot of the people in this area are conservative and white, so beginning anything even remotely feminist could be seen as a challenge to the white heteropatriarchy of this area. I wonder if anyone has any good resources for activism at this level besides the work of Jennifer Baumgardner and Amy Richards?