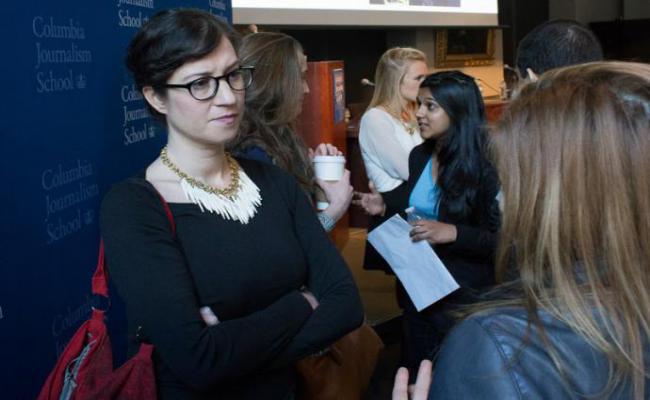 Journalist Lauren Wolfe answers questions after a Conversations in Journalism panel about the criticisms women face when reporting on war. Photo by Kali Ray Kotoski and courtesy of Columbia Journalism School Women in Media.

Last week, the Columbia School of Journalism Women in Media’s first-ever conference explored the ways women are seen and treated in the media industries.

During the panels and lectures that made up the day-long “Conversations in Journalism” conference, much of the discussion focused on what actions women and men in media can be taking to make our media environment better.  Female journalists cannot overlook how older generations paved the way. But at this critical juncture in media history, we’re facing old problems within an entirely new and swiftly changing media landscape.

On one panel called “Breaking Into the Boys’ Club,” Lynn Povich (one of the 46 women who sued Newsweek for sexual discrimination in 1970) noted there has been major progress in the industry for women, but there’s a lot still holding us back. While women may increasingly be in top positions and covering armed conflict, noted Povich, two-thirds of print opinion columnists are men. Janice Simpson, who spent three decades at TIME magazine, echoed these issues on the same panel. Sometimes problems merely evolve rather than being “solved.”

Gender discrimination is, unfortunately, not exempt from cutting-edge media groups. According to Sisi Wei, a former graphics developer at the Washington Post, who now works for ProPublica, “When journalism and tech intersect, tech discrimination against women has been predominant.”

According to presenters, women are often found behind the scenes in media startups, a sort of invisibility that harkens back to the early days of print and broadcast journalism. Sarah Cohen, who is involved in a number of digital teams at the New York Times noted that women are taught to be less self-promotional than men.

“That’s how you build the brand of yourself,” Cohen said. “Men tend to promote themselves more and thereby have more of a brand.”

But whether women are working with old-school print media outlets or fledgling new ones, sexism persists. If we’re going to improve issues like how men dominate bylines, men and women working in media need to acknowledge how they perform and perpetuate sexism their own lives. Margaret Sullivan, the first public editor of the New York Times and a co-panelist with Simpson and Povich, added the fact that “there’s a lot of humiliation in this business”—particularly in attempts to keep women down. 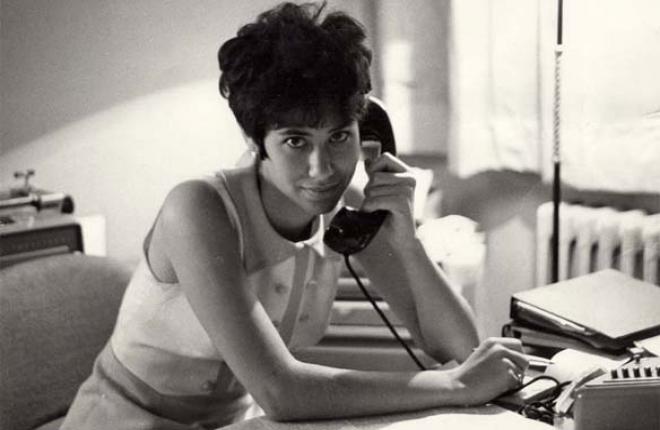 This photo of Lynn Povich at her Newsweek desk later served as the cover of her book about female employees suing the magazine for discrimination.

For one example, keynote speaker Kimberly Dozier (an Associated Press correspondent who’s perhaps best known for her role in broadcast television) talked about the impact of appearance in her field. Women are constantly analyzed in accordance with their appearance rather than their actual reporting. “I’ve learned how to use makeup,” she explained, “Now I have a color I call ‘see-from-the-moon-red.’”

According to Dozier, women have to be in the very top ranks or still look “amazing” to have a contract renewed. She calls it “the tyranny of the medium.”

It was a major wake-up call for Dozier when she one day found herself perpetuating the same behavior—criticizing the appearance of newswomen on TV without even noticing.

“I learned I’m human,” she said with a chuckle.

Dozier made some questionable remarks as well. As a reporter who has done a significant amount of armed conflict coverage, she talked about trying to use her gender to her advantage. She also mentioned women who “flirt their way to the top.” Dozier never made it entirely clear how she felt about these practices.

Sexism can become a comfortable space for everyone, to be sure. The most important counteraction is to acknowledge it in ourselves and not repress the notion that women can be sexist too. We need to learn how to channel those realizations in actionable ways.

Nancy Giles, a contributor to CBS Sunday mornings, covered methods of turning discrimination into empowering actions—taking the difficult moments and making something better come from them. Giles, who is taller than average, recalled a time when she was wearing high heels and a man asked whether she was male or female. Later, Giles worked this awkward moment into a piece that won wide acclaim.

In acknowledging that there are ways we fail to see our own sexism, The New York Times’ Margaret Sullivan prefaced a question about “work/life balance” (can you have it all?), by saying it’s a provocative—even sexist—question in the first place, but one that has been a major topic of discussion in recent years.

Many media veterans at the conference pointed to another glaring example of ingrained sexism: women not doing enough to support one another at work.  There are many ways the industry trains women not to support each other and, often pits them against one another instead. Opportunities rarely fall into your lap, experienced reporters say, so instead they must be sought out and taken, no matter how scary the situation—and doing that scary work is easier when you have support.

As Povich, of the Newsweek scandal, said, “Don’t fight each other, that’s what the system wants. Fight the system.”

Alissa Fleck is a freelance journalist and comedian based in NYC.

Related Reading — The State of Women in Media: We May Never Run the Presses.