Revenge of the Feminerd: In Praise of Batgirl | Bitch Media

Revenge of the Feminerd: In Praise of Batgirl 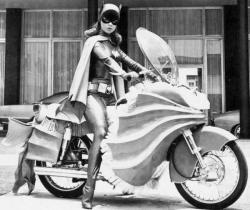 The three of us eight-year-olds scrabbled through the dress-up trunk, tossing aside toy crowns and shiny costume jewelery onto the hardwood floor.

We were playing Batman and the goal was finding the stretchy, black cocktail dress that was the MVP of the costume box, along with the sheer, black gloves. We got the idea from watching reruns of the 1960s TV series starring Adam West. Anna was usually Batman and Sacha and I traded off being Robin and Catwoman. But I wasn’t really a big fan of Robin and I wanted to be a good guy, so the most exciting development in the show for me was the introduction to Batgirl, played by Yvonne Craig. Not only was the character a new option for our dress-up games, but she was just really cool to watch.

Just think about it. In her daytime job, she was Barbara Gordon, a librarian; she was a bookworm just like me! But as Batgirl she also fought crime, getting Batman and Robin out of many a tense situation, and she had a kick-ass motorcycle.

Since those early days of running around, Sacha in a pair of costume cat ears pretending to tie up either Batman (Anna) or Batgirl (me) until the other one came to the rescue, Batgirl has been my favorite superheroine. I know I’m not alone—Ashley did a couple fantastic posts on Batgirl for Bitch last year.

Batgirl is a character I can relate to. She’s less cutesy than the Sailor Scouts, wears more clothing than Wonder Woman, is nerdier than Nightshade, and has more generalized super abilities than my second-favorite superheroine, Storm (but it’s really close, so don’t hate on me, X-Men fans).

In the 1970s Yvonne Craig did PSAs for pay equity for the US Department of Labor. Craig was quoted as saying: “I meet young women who say Batgirl was their role model… They say it’s because it was the first time they ever felt girls could do the same things guys could do, and sometimes better. I think that’s lovely.” Here is the video of the PSA, in which Batgirl swoops in to save Batman and Robin from a ticking bomb, but not without demanding equal pay from Batman first:


Unfortunately I didn’t get a whole lot of Batgirl exposure when I stopped watching those reruns. While Batgirl has made it into a few of the animated TV series, the character has been pretty absent in the Hollywood movie adaptations, excepting Alicia Silverstone as Batgirl/Barbara Wilson in the fairly terrible 1997 movie Batman and Robin.

Where Batgirl has really thrived is in comic books. Though her huge-chest/tiny-waist portrayal is typical of the problems we see with comic book superheroines, her character is about more than that.

Or maybe I should say characters? In 1988 DC Comics drew flak for having Barbara Gordon paralyzed after her spine was severed by the Joker in the graphic novel Batman: The Killing Joke. Luckily, comic book writers Kim Yale and husband John Ostrander were also appalled at the treatment of Batgirl/Barbara Gordon and decided to bring back Gordon as a superheroine with a disability, named Oracle. With her photographic memory, hacker skills, and training in library sciences, she founds and leads operations for the Birds of Prey, a team of superheroines, and learned new ways of fighting.

Some people have argued that Barbara should be cured somehow, returning her to the position of Batgirl, but I’m OK with her as Oracle. It’s good to see positive and strong representations of women with disabilities in comics. And as a computer geek, I love that a computer geek’s skills could be used to change the world. Besides, without Barbara becoming Oracle, we never would’ve got to see some of her Batgirl successors, including the awesome Cassandra Cain. 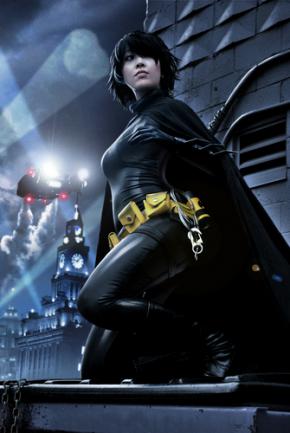 Cassandra, an Asian-American character, was the first non-white member of the Batman team, and she served as Batgirl from 1999 until she was replaced by Stephanie Brown in 2009. The Mary Sue does a great job documenting Cain’s history and awesome qualities so I won’t go into too much detail here. Suffice it to say I like that she looks like more of a fighter and less of a sex object than other superheroines, including the original Batgirl. I also like the fact that she didn’t seem as angst-ridden about her past as other comic characters seem to get.

While I haven’t been keeping up much with the adventures of Stephanie Brown as Batgirl, I’ll always have a soft spot for Batgirl overall.

oooh I gotta be honest, Catwoman is my deep seeded love. She's been given the shaft over and over again by writers, but despite her less that feminist beginnings, I will always come back for more. A very very close second however is Oracle. I couldn't imagine her going back to being Batgirl. Barbara Gordon is what makes everything function behind the scenes. <3

I'm part of the cult of Cass Cain.

Hands down it would be Storm. Possibly followed by Jean Grey/Phoenix. I have a bit of an X-Men obsession :-)

Batgirl will always hold a special place in my heart. When I was in middle school I drew a really silly rip-off comic about her (although she was called Batwoman, and her real name was Denise) and her associate the Lightning Lemur. Come to think of it, the Lightning Lemur, who could shoot bolts of electricity, was pretty badass.

Yeah, I was that nerdy.

I've never been into comics, but this article got me interested!

Little help? I'm entirely unfamiliar with the comic universe . . . I have an 8 year old Chinese step daughter and if she watches another iCarly or Wizards of Waverly Place, I am gonna rip my hair out. I'd love her to give her a stronger, all around better role model, and Cassandra Cain sounds PERFECT!

Was Cass Cain in comics only? Or was it a tv show? movie? How could I get whatever it was that she was in? (or is it old and very valuable, and therefore out of my price range?)

Thank you for any help!

Hi MonZniFly - as far as I know, Cass Cain has only been in the comic books.