In Praise of Difficult Girls 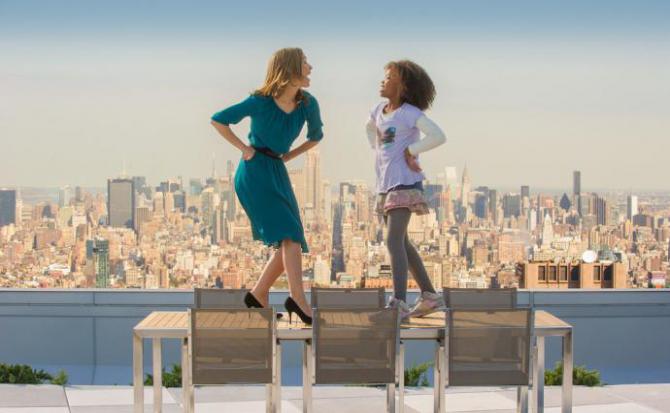 In the remake of Annie that hit theaters this weekend, Quvenzhané Wallis stars in the title role. That itself is thrilling: The film not only tells the story of a feisty girl, but a feisty young girl of color.

There are not enough stories about young girls of color, but in recent memory there have been a handful—including Beasts of the Southern Wild, Wadjda, Lilo and Stitch, Mulan, Whale Rider—that have been been mainstream hits in the United States. These girls resonante because they defy traditional stereotypes of how a woman, young or old, should behave; viewers are eager to see heroines who are more complex than the limited roles afforded most women on screen. Of course, there are numerous young white heroines recently who have been lovable rebels, but there’s a significant difference between new Annie and Brave’s Merida, for example. Seeing spunky, rule-breaking characters like Quvenzhané Wallis’ Annie is so exciting because she gives her real-life counterparts a rare chance to see themselves reflected back. The role helps normalize the idea that an assertive black girl can be a hero for going against the grain, for being impolite and disrupting ideas of what it means to be a girl. These heroines of color aren’t concerned with respectability politics, following rules about how people of color should strive to “emulate white, middle class values.” When these heroines fight against the status quo, they’re advocating for change and justice, either for themselves or their communities, without caving to pressure to be well-behaved. These movies help kids see that fighting injustice is what our heroes do—that experience can have huge ramifications for the future.

It’s significant that girls of color have role models on screen at all. We know that so much of media is not made with them in mind. There isn’t a ton of data out there on how often girls of color end up on screen, but award nominations help tell part of the story. A look at the Critics’ Choice nominees for Best Young Performer shows us that since 1996 when the category began, only seven of the 95 nominations—including one for Quvenzhané Wallis in Annie—have been for girls of color. In that same way, The YoungStar Awards from The Hollywood Reporter given out from 1995 to 2000 awarded 84 film nominations to young actors. Four nominations were for girls of color.

As Imran Siddiquee points out in his recent piece on why the new Annie film is significant, 46 percent of all ticket buyers in 2013 were people of color, but none of the top 25 romantic dramas of all-time have a main protagonist who’s a woman of color. He writes:

Perhaps most exciting is film’s ability to teach empathy—by placing audiences so deeply in the shoes of another. Researchers have suggested that “empathy is inherent in the nature of narrative cinema.” Whether via the protagonist or the director, watching a movie is to see the world through someone else’s eyes. Most of the time, those eyes belong to white men (who are straight and able-bodied). And, in most of their stories, they ask their audiences to feel that compassion for people who look just like them.

Films with spunky female heroines of any race are more prevalent than they used to be—think of brilliant and brave Hermione in the Harry Potter series, fearless Olive in Little Miss Sunshine, and Moonrise Kingdom’s daring and dangerous Suzy. But it’s not enough to have tough girls who live in a fictional England or New England town painted in sepia tones. More and more complex portrayals of girls of color are needed to fully represent all girls, living all sorts of lives. “Having more images of [young women of color] on film, which everyone absorbs from a very young age, could be so inspirational and allow girls to look at themselves as heroes, as conquerors, as worthy of rising above whatever problems they may have, because someone who looked like them was able to do it, even if it’s just on film,” writer Constance Gibbs explains. If they can see the full spectrum of what’s possible, how one girl can make a difference, then it will hopefully inspire them to break boundaries in their own lives.

To a larger audience of all young folks, films like Annie are a chance to expand a definition of what a hero looks like. There’s no doubt that this past weekend girls—whether they’re black, white, or multi-racial—walked out of the theater thinking, “I want to be just like Annie.” To see her and empathize with her struggles and happy ending is to say that her life matters, too, which could not be more relevant today.

Getting to the root of why we empathize with these characters is not simple. Of course, there’s a distinct pleasure in watching girls just be badass. We want to watch the hero triumph. But we need to be careful of how toughness is being applied. bell hooks wrote a response to Beasts of the Southern Wild which identifies some problems in depicting young women of color. hooks took the white creators of the film to task for creating Hushpuppy, “a miniature version of the ‘strong black female matriarch’… a survivor” that is “told that she has only herself to count on, that no else will be there for her, that she must be ‘strong.’” Her criticism of strength as a racialized expectation is useful to consider, especially when considering who creates these narratives. But with these characters, we also love when they get to have fun, to be silly, playful kids. So much seems to interrupt girlhood—in Annie’s case, the death of her parents, and adults who dole out “tricks instead of treats”—so when she’s able to create spaces where she can just be a carefree girl, it feels like a major triumph. Hopefully, it also serves as more evidence to a young viewer that women of color are complex and limitless, capable of achieving their dreams even when their circumstances might dictate otherwise.

It’s also important to remember, though, that “representation only goes so far,” as Moya Bailey, academic and former member of the Crunk Feminist Collective, points out. “It’s important for young girls of color to see themselves represented in popular media but these representations are part of a myriad of needed interventions to make a difference in their lives.” One hopes that representation can be step one in a larger process to change the lives of young women of color, because they “need this inspiration so badly,” says Gibbs. Showing girls of color characters, young women of color, that “they can rise above their circumstances and overcome their problems,” as she puts it, might serve as inspirational role models for girls looking to make change in themselves and in their communities. Weighing in, Woman Unveiled says, “Women have fight in them. It’s important to bring this out.”

It also impacts the stories that are told. Instead of a neutral-looking, Anytown, U.S.A., for example, Wadjda was filmed on location in present-day Saudi Arabia, and Whale Rider’s Pai is Maori. “Perhaps the best part of [Wadjda] was its power to inspire young girls in the Middle East,” says Woman Unveiled, especially because of the character’s home in Saudi Arabia, where women are often limited in what they can do in public—drive cars, eat in company cafeterias, and ride bicycles, the last of which drives the plot of Wadjda.

Waad Mohammed starred as the main character in Wadjda, playing a strong-willed girl who dreams of riding a bike.

Shahnaz Taplin, board chair of Invest in Muslim Women, concurs: “Wadjda inspires us to push through to new frontiers and for young women to stand up and be counted… For a young woman in Saudi Arabia to be as determined, ambitious and feisty as she was signalled to the world that she too could participate actively in the world and not only dream - but more importantly also realize her dreams.” Bringing this narrative to Saudi and Middle Eastern audiences, to young women seeing themselves represented, is a great stride forward. As for Annie, the original stage musical can be set in any Depression-era big city, but the classic 1982 movie is clearly set in New York. The new adaptation locates the film even more specifically to Harlem—and she’s not in an orphanage any more but in the care of an alcoholic foster mom (Cameron Diaz) who only takes care of kids in order to get money from the state. Updating these elements makes the story feel more real and socially relevant than the old-timey version.

Hushpuppy, Wadjda, and friends are an inspiring bunch, showing us that girls can be strong leaders with clear roads ahead. Their older sisters—Jess of Bend It Like Beckham, Real Women Have Curves’s Ana, and Alike from Pariah, among others—are still fierce and difficult, but show that life gets harder as one grows up. The bottom line is: the films that have been made are crucial, and great, but we need more stories. Because like me, those five-year-olds will grow up, and they too will be hungry for the days when watching a movie meant watching someone like them, being as fierce and brave as they could be.

Emily U. Hashimoto wore out her VHS copy of Annie (1982) and is deeply inspired by young women activists of all stripes. You can find Emily at books-feminism-everythingelse.tumblr.com or @emilyhash.