In Sorta Good News, Tomb Raider is Returning to the Big Screen 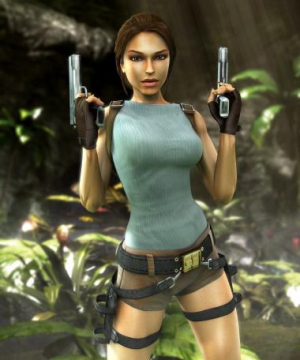 There’s been a dearth of female-driven action movies the past couple of years.  With the exception of 2007’s Resident Evil: Extinction, and 2008’s Doomsday (which gets my award for the “so bad it’s completely awesome” film of last year) - and maybe even Wanted (Angelina Jolie wasn’t the actual lead in the film, even though it seemed that way) - female action movie stars seem to have gone MIA.  In 2009, women will join a number of action movie ensemble casts, but it looks we might only see a leading superheroine in Street Fighter: The Legend of Chun-Li.  In this cinematic climate, a new Tomb Raider movie is most welcome.

On the other hand, it’s a new Tomb Raider movie.  Lara Croft is a notsomuch the feminist dream of an action movie heroine.  She’s an impossibly shaped character designed to make gameboys drool on themselves while they play.  After all, this is a video game that became famous for a fan-created “nude patch” that enabled gamers to play a naked version of Lara Croft (“Nude Raider,” natch).  This is such a frustrating problem: we’ll need Tomb Raider to be a big giant blockbuster because box office success is the only way to prove that women can carry action movies.  But we probably don’t need another big screen Lara Croft.

I don’t mean any offense to feminist Tomb Raider fans here.  I’ve played and
enjoyed several of the Tomb Raider games and I even didn’t mind the big dumb spectacles that were the first two Tomb
Raider movies.  But I’m still not thrilled that we may have to bank on Lara Croft to try and prove (again) the credibility of action heroines.

What do you think about a new Tomb Raider movie?

I am not sure how I feel about the new Laura Craft, I read that Megan Fox is in the talks to be the new Laura Craft, but then again she was rumored to be in the new Wonder Women, so who knows. I know for a fact Angelina Jolie has said she would not return to do another Tomb Raider. I too enjoyed playing the games, and the first two movies were enjoyable. I agree it would take a blockbuster hit for people to start paying attention, and there is a ton of films lacking lead heroins, but I do not think it is about quantity but more of a quality issue. I would like to see more quality action films starring a strong female character as the lead, than another remake of Tomb Raider. I opt for a change in action movies starring a female lead than a bunch of remakes.

As a feminist and an action movie fan, the pickins sure have been slim lately. The last memorable one I can think of that didn't include boring stereotypes and rampant gratuitous nudity was The Kingdom with Jennifer Garner.

As a point of trivia, I believe the character's name is <i>Lara</i>, not Laura. I geeked out online, and learned that her name used to be Laura Cruz in order to fit her originally South American origins, but she was transformed into an Englishwoman and given the name "Lara Croft" to appeal to US audiences. Just wanted to give you a heads up.

Anyway, playing Lara Croft for the original Playstation was the hardest thing I've ever had to do, and I'm counting the time I sat through the entirety of <i>Glitter</i>.

That being said, I think the gain of having a successful action movie lead by a woman is eclipsed by the much larger impression it will make, which is "Man, she is fucking hot.".

In the words of the now deceased Big Kev
I'm excited

by Amy Lam
The list of actors who have had clueless responses to #OscarsSoWhite is so, so long.