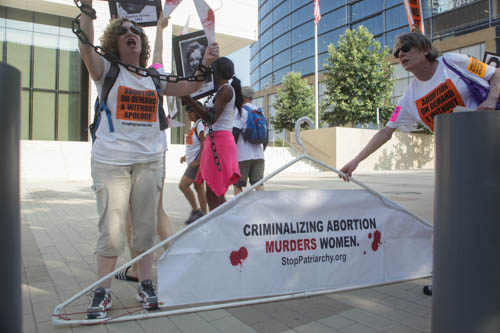 Inside the federal courthouse in Austin, Texas, Whole Woman’s Health and the Center for Reproductive Rights spent Monday morning fighting to preserve access to safe, legal abortion. Outside the courthouse, a group of people called Stop Patriarchy marched around, proclaiming, “Forced motherhood is enslavement!”

Stop Patriarchy is New York-based group whose slogan is “End Pornography and Patriarchy: The Enslavement and Degradation of Women.” On Monday, members of the group wore chains, flashed clothing hangers covered with fake blood, and screamed for the television cameras on site to cover the proceedings. As soon as the cameras were gone, they packed up and left.

This is Stop Patriacrchy’s routine: they fly in to places where there’s action around reproductive rights, scream loudly, and then take off. They seem like allies to many of the causes that other reproductive rights groups work on, but Stop Patriarchy got the attention of Texas reproductive justice activists this past week when the group launched a $32,000 fundraising campaign called the “Freedom Ride”—tagging groups like Lilith Fund and Fund Texas Women on Twitter as though they were supporting the effort. The Lilith Fund and Fund for Texas Women are not actually connected to the Freedom Ride. Instead, Texans For Reproductive Justice—a collective of local Texas organizations and activists—is urging people not to support the Freedom Ride because the group is “racist, Islamophobic, anti-sex worker and anti-pornography.” They write:

Stop Patriarchy is diverting both financial contributions and energy away from groups which have been doing important work in Texas for years or decades. Stop Patriarchy is not collaborating with any reputable Texas-based organizations, and in fact, many organizations working toward reproductive justice in Texas and across the country have actively and openly rejected Stop Patriarchy’s presence because of the group’s history of using disruption and intimidation to promote their own agenda above all others.

The name of the Freedom Ride and the protests equating Texas laws with slavery are troubling, says Lenzi Sheible, president of Fund Texas Women. “I sent them a tweet that said, ‘Please stop equating abortion restrictions with slavery,’” says Sheible. “In Texas, we are always trying to make feminism as inclusive as possible. This requires a serious attention to the intersection of reproductive health with race, class, ability, sex, gender, sexuality, language, immigration status, and more. If Stop Patriarchy is not willing to do that work, then they don’t belong in Texas.” 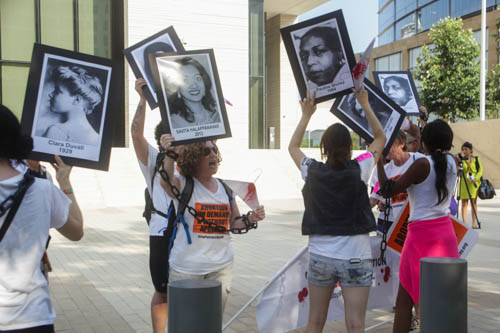 When the fundraising campaign launched in June, Texas activists and organizers began asking Stop Patriarchy frontwoman Sunsara Taylor what the group planned to do with the $32,000 and how exactly they were going to help residents of Texas who are less than a month away from only having six abortion clinics in the entire state. It turns out the money isn’t going to Texas reproductive rights groups, but to Stop Patriarchy to run a protest-bus tour through the state and then make a film about their efforts. Genevieve Cato responds to the campaign on the Burnt Orange Report, saying, “That’s right, they are raising tens of thousands of dollars to fly people into the state, house them, feed them, make flyers, and then make a movie. They aren’t raising money to directly help people who need funds right now to get abortions in Texas.”

As anyone who watched last summer’s filibuster at the Capitol knows, insisting that Texans don’t know how to protest is ridiculous on its face. Pictures and videos of people being arrested, shouting over legislators attempting to vote away their rights, and filling the capitol grounds in the blazing summer heat are widely available. So what made a group that’s purely counter-protest movement want to come to Texas? They’re making a movie. 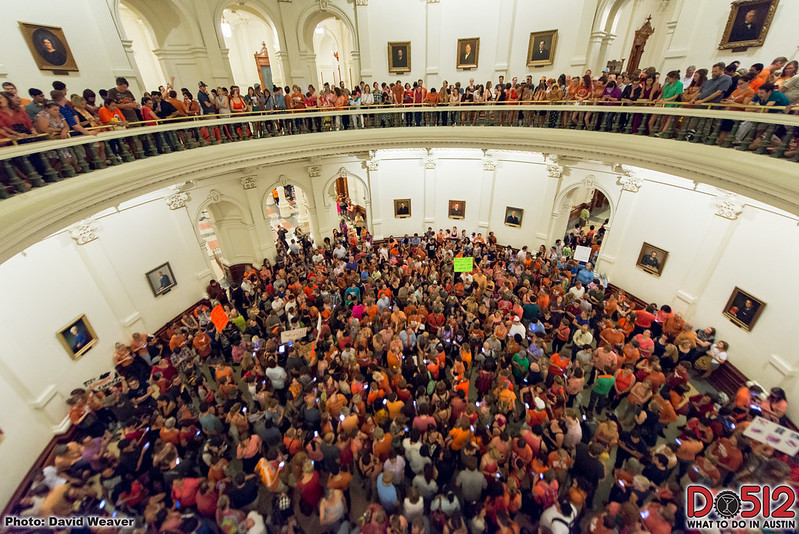 Thousands of Texans turned out to protest abortion restriction laws last year. Photo by DO512 via Creative Commons.

Texans don’t need a movie that uses their plight to raise money for an out-of-state organization. They need allies and resources—both of which are welcomed from people outside of Texas, despite the retorts of Stop Patriarchy who claim their presence is unwanted because they’re “outsiders” while crying “McCarthyism!” of people who criticize their tactics (Sunsara Taylor is a member of the Revolutionary Communist Party).

Lenzi Sheible implores anyone who can safely discuss their support for abortion access to include Texas in their conversations.

“Magnify the words of Texan activists whenever you get the chance,” said Sheible. “Contribute to Texans who work for Texans—not to Stop Patriarchy, whose money will never help a single person in this state. Helping to pay for abortions is something anyone can do from anywhere.”

In addition to the “forced pregnancy is enslavement” protests, Stop Patriarchy is holding a series of “People’s Hearings” where people can share their stories about abortion access in Texas. Even if these are helpful listening sessions, Texans are already doing this work: Women’s Health Champions of the Texas House, started by state Representative Donna Howard and supported by NARAL Texas, is a statewide listening tour to raise awareness for reproductive rights. Sheible explained that community organizing and work like the listening tour is happening all over the state:

“People from other parts of the country don’t understand that Texans are fiercely fighting against oppression every day. Our state government is much more conservative than we are for many reasons, like gerrymandering and racist voter ID laws. Texans are not complacent; we have been agitating and organizing for years. But the political systems in place here just make it much harder for us to create change.”

In their “Call to Action,” Texans for Reproductive Justice recommends that instead of contributing to the Stop Patriarchy fundraising campaign, people support any of 10 Texas-based organizations including The Bridge Collective and The Cicada Collective. The Bridge Collective offers full-spectrum doula care for Texans who are looking for contraceptive information, adopting, seeking abortions, trying to become pregnant, are pregnant, or who are new parents. The Cicada Collective centers around the needs of queer and trans* people of color who seek a variety of reproductive health care services.

Later this week, Stop Patriarchy will move on to San Antonio and then the Rio Grande Valley. And then they’ll leave. Texans will still be at work responding to the needs of their state and communities because that’s what they do. They are working a long game toward restoring access to all aspects of reproductive healthcare as well as an inspiring effort to save lives and families along the way.

In addition to the issues with raising money to film themselves doing work that Texas organizations are already doing, Stop Patriarchy is frustrating to many people working on feminist causes because of the other part of their mission: to “end pornography.” I talked with Melissa Gira Grant, the journalist and the author of Playing the Whore: The Work of Sex Work, about how the organization has made the lives of sex workers harder.

“Stop Patriarchy opposes pornography and prostitution—not just the business, but the people who work in those businesses. They organize protests against businesses where sex workers work, without the direction or even consent of those workers,” says Gira Grant.

Two years ago, Gira Grant and Sunsara Taylor held a public debate on the issue of pornography and the sex industry—Gira Grant was annoyed to discover that the group was using the reverse side of a flier promoting their debate to call for an action against a sexually oriented business in New York. “There’s a history of feminist activists speaking on behalf of sex workers and discounting sex workers who speak up for themselves,” says Gira Grant. When she heard about the current Freedom Ride from Texas activists, Gira Grant understood their concerns. “It doesn’t surprise me that Stop Patriarchy is yet again trying to co-opt a hot topic for feminists, especially young feminists, and to use that to draw attention to themselves.”

Related Reading: The Power of Fiery Language vs. Data is Texas’ Abortion Debate.

Relevant: The Importance of Expanding Sex-Ed to People with Developmental Disabilities

by Katherine Marrone
Educator Katherine McLaughlin has been teaching sex-ed to people with disabilities for 20 years. She talks about what works and what doesn’t.