In "The Fall," Gillian Anderson Plays a Detective Who Doesn't Care About Being Likeable. | Bitch Media

In “The Fall,” Gillian Anderson Plays a Detective Who Doesn't Care About Being Likeable.

The Fall is a serial police drama that flips the script on the conventions of its genre. The BBC 2 drama, whose second season starts up again on November 19 (and will hopefully stream on Netflix soon after that), stars Gillian Anderson as Detective Superintendent Stella Gibson. In the first season, Gibson travels from her job in London to to investigate the murder of a high-profile young woman in Belfast. She is a clearly brilliant detective with an analytical mind, not unlike Anderson’s most famous role as Dana Scully on The X-Files. But the character departs from Scully there. In fact, Anderson herself drew the distinction, saying Stella is “hard to know and I feel like Scully was quite easy to know. Scully was innocent, naive, in many ways square. Stella is definitely not square.”

Stella is the most recent in a string of female detectives in pop culture, like Top of the Lake’s Robin Griffin (Elisabeth Moss), Prime Suspect’s Jane Tennison (Helen Mirren), the Swedish Danish and US versions of The Killing, and The Girl With The Dragon Tattoo’s Lisbeth Salander (who has been discussed in more depth by Bitch before). Like them, Stella is cool-not-cold, talented, and obsessed. She doesn’t worry how she’s being perceived by others—she’s worried about doing her job well.

The Fall makes it clear right off-the-bat that Detective Gibson is independent and incorrigible. In the first episode last season, she stopped her car at a crime scene to hit on an a young, attractive male officer. Without blushing or stumbling, she told him what hotel she was staying in and added her room number before getting back into the car. After their rendezvous, she was polite but firm that she got what she wanted and has no interest in further personal involvement. Later we learn about a past affair with a married man. When confronted with his admission that he would have left his family for her after their one night together, she looked at him with muted bewilderment and told him she’s glad he didn’t. As show creator Allan Cubitt wrote in June 2013 for The Guardian, “Under patriarchy, women’s sexuality is often only permitted a limited expression. Gibson insists she has a right to an autonomous sexuality.”

The show’s portrayal adds up to this: it is clear that the detective is in charge of herself without any shame and guilt-ridden trappings often bestowed on female characters. Detective Gibson excels in the same clear-minded way in her professional life as she does in her sex life. She is a high-level police officer with in-demand services. When she gets on a case, she is (as they say on reality shows) not there to make friends. Gibson doesn’t care whether she’s “likeable”—she’s there to work. While television shows often set up career-focused women to be secretly damaged by their singledom, Gibson doesn’t have a problem eating alone in a restaurant while reading case files or sleeping in her office to be closer to the action. When Gibson takes command of a particular case, she transitions smoothly into her role as a leader, without all the sturm and drang that usually accompanies such professional changes for female characters. “Can I do this?” never seems to enter her mind. Instead, she makes clear to her team: “I’ve got this covered.” Too often, women in TV and film are cast as incapable in their professional lives, waylaid by personal issues or a hysterical abundance of emotions—if they even have a career at all. In real life, family concerns can be a hassle to one’s working life, but it is utterly refreshing to see a female character be good at her job without worrying about having a boyfriend or children.

While Gibson’s character is an excellent addition to the police-drama canon, the show’s central plotline is regrettably unoriginal. The case Gibson sleeps in her office to solve all the faster revolves around a serial killer, who we get to know quite well, and who favors targeting pretty young professional women. We see the way he stalks and plans; we see his violence. I cannot adequately express how sick I am of seeing these stories told and glorified, as if there is no other crime that is ever committed. Sexual violence happens in real life, and certainly shows like True Detective, Luther, and The Killing are artful and complex depictions of such violence, but that does not mean it’s the story we should be telling on repeat.

The killer is revealed in the first episode to be an attractive young father and husband, a seemingly normal bereavement counselor whose cool demeanor in his daily life and in his second job as a murderer mirrors, perhaps, the detachment that is Gibson’s default mode. They are linked in another way, too. She fits his victim profile: successful and unmarried women without children. He’s played by Jamie Dornan, Fifty Shades of Grey’s Christian Grey. He is made human enough as to be relatable and as the audience you’re tricked into being on his side, a little or a lot. He’s dashing, he has a troubled past, and maybe we don’t want him to murder anyone, but we don’t necessarily want Gibson to catch him. Maybe, the show almost whispers, those professional women deserve it: they’re alone, which makes them vulnerable.

Allan Cubbit (right) behind the scenes during the first season of The Fall. All photos courtesy of the BBC.

In defense of his show, Cubitt says this is not the case. He wrote in The Guardian that he didn’t want to glamorize violence and instead took “pains from the start to make sure that there was nothing gratuitous or exploitative in the drama.” On TV, we often only see the victims at the point of their demise or right before it. Since this killer stalks first and murders later, we get to know these victims before their fate befalls them. In that way, they are more real to us as characters than on a police procedural show, where all we usually get is a sprawled woman on the bed. Cubitt’s aim, he says, “was to explore some aspects of this phenomenon of violence against the female body” which made it was imperative to flesh these women out so that they are more than victims. In this he succeeds, but its depiction is still disturbing nevertheless.

There is something redeeming in his aim, because unlike other media that casts women as victims, there is a deeper current running under the surface. When they talk about motive, why the killer would so ruthlessly target the women he targets, Gibson calls it misogyny and “age-old violence against women.” To label it is to make clear what violence against women really is: it doesn’t matter that he seems to prize his victims, almost in adoration. He is seeking to control them through violence, which is a tale as old as time, “as endemic in patriarchal societies” such as ours, as Cubitt characterizes it. To make that clear in no uncertain terms and to label it misogyny is extremely important.

It is disappointing to see an amazing female character inhabit such an tired realm: a male serial killer who targets young, attractive women. There’s no getting around that. But it is possible to not throw the baby out with the bath water. It’s hard to see the good in a show that once again depicts violence against women, but The Fall does it in a way that doesn’t disrespect women.

Toward the end of the first season, Detective Gibson and the killer inevitably have a conversation, one of those standard hero-villain standoffs. For spoiler’s sake I won’t reveal anything else, but there’s a moment while they’re talking where the killer seems to have the upper hand; he is clearly winning their interaction. And suddenly, there’s a subtle shift: she reveals how much she knows about him, how close she is. He is flummoxed by her brilliance and suddenly she has the upper hand. What happens next season is still unknown, but Cubitt says he looks forward to exploring these issues in more detail, and I look forward to seeing what he uncovers.

Related Reading: It Was a Dark and Stormy Night — How Heroes Became Heroines in Nordic Noir.

Emily U. Hashimoto watches too much television, but it has served her well for this purpose. You can find Emily at books-feminism-everythingelse.tumblr.com or @emilyhash.

A minor correction; Cubitt did not direct any episodes in the first season. Jakob Verbruggen (the man in the middle in the picture) did. Cubitt directed the second season, though.

I'll edit the photo caption to reflect that Cubbitt is not the director in that image.

The Killing is Danish though

Are there any PoC in this series (exccept for Archie Panjabi, how prominent is her role?). This looks very white from what I've seen in trailers/photos.

Since when did it become a major need to have women emulate the SHITTY characteristics the males espouse? I mean, likeability comes from like a myriad of characteristics, and if you're referring to the TV frontmen that ooze lack of likeability despite commercial success (haven't watched it but i'm guessing MadMen is an example, Sterling Archer is an example I know well though). I think the focus should be on whether she decides to maintain specific attribute rather than an umbrella term of likeability. And if those characteristics for likeability change w/ gender then we shouldn't use the term at all because it requires further distinction anyway... 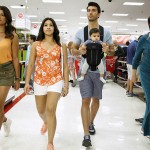