In the Frame: Female Artists in Literature, From Bront | Bitch Media

In the Frame: Female Artists in Literature, From Bront Great artists don’t just have to exist in galleries. Books have given us some really inspirational pre- or post-feminist characters that are good at art, and this liberates them either emotionally or physically. What unites them is their independent thinking, as they are determined to go against the grain and not end up like their peers, bitter or vacuous. Some examples here are from classic novels, such as Jane Eyre, where art is a form of escapism for our heroine, whereas in Andrew Davidson’s modern novel The Gargoyle we find a sculptress whose work is so consuming that it leaves her exhausted. Whatever the situation, it is clear that these women take their art seriously—it’s not just a hobby to keep them occupied before they’re whisked off by Prince Charming. This is so much better than a fairytale.

Motivation: Expressing herself and keeping a visual record of those around her

Jane has an “ever shifting kaleidoscope of imagination” and loves to draw. It’s often a form of escape and she really enjoys it, being “absorbed and content” by her hobby. Having a drawing of her beloved Mr. Rochester helps her to get through bad times, with “a friend’s face under my gaze,” and she feels that she can cope with her problems. Sadly nobody thinks Jane capable of producing art, which just helps to emphasize Brontë’s message of plain women being just as capable of greatness as pretty ones—this book was one of the first to show romance involving a girl who didn’t resemble a 19th century supermodel. Not only can she wield a pencil and do a mean watercolor, but she’s also an incredibly strong woman who refuses to be eye candy or be submissive.

Motivation: Earning enough money to provide for her son as a single mother

A different Brontë sister with a different story to tell, Anne gives us Helen Huntingdon, a woman brave enough to walk away from her cold and abusive husband at a time when society was telling her to put up and shut up. “I cannot afford to paint for my own amusement” she says when we meet her living under a false name (Mrs. Graham) at the start of the novel, though she does enjoy being an artist. Art is a way for Helen to support herself and her child, without the negative influence of Mr. Huntingdon, who was often drunk or eyeing up other women. The refreshing thing about this book’s portrayal of art is that its male protagonist, Gilbert, doesn’t criticize Helen for being a painter when he gets to know her as Mrs. Graham. He even envies her, with her “privilege of being able to imitate the various brilliant and delightful touches of nature,” and he never suggests she should stop creating and just be a housewife. Go Gilbert.

It’s not really surprising that Virginia Woolf should be interested in writing about art; her own sister was a modernist painter, called Vanessa Bell (who illustrated the book’s first edition cover), so the character of Lily gives us a view of life in that industry. Lily Briscoe, an abstract painter, battles against the traditionalist views of Charles Tansley as they both stay on the remote Isle of Skye in Scotland. He states that: “women can’t paint, women can’t write,” whereas Lily definitely contradicts this and will spend a long time worrying over the composition of a piece. She even faces secret criticism from one of the few other women on the island, Mrs. Ramsay, who thinks “one could not take her painting very seriously.” So much for the sisterhood.

Motivation: Spiritual (believes that she is freeing “hearts” within her body and releasing gargoyles from the stone)

“The instruments flew around furiously but her hands looked sure, and I sat hypnotized by the dance of metal, stone, and flesh.” This is how our narrator explains the process behind Marianne’s art. She finds her vocation in sculpting grotesques and gargoyles, spending long hours working on each piece. Marianne finds commercial success and she has plenty of buyers, but money means nothing to her. She will often “collapse into her bed, still covered in dust and sweat.” The nature of sculpture is strange—”It’s backwards art. You end up with less than what you started with”—and this is reflected in the narrator’s story too. We meet him just as he’s recovering from a serious accident and he is literally being reassembled. Marianne’s art threads this story together and it helps our unnamed narrator to put his life back together.

The author Michelle Lovric is so into her painter character, Cecilia Cornaro, that this is the third novel she’s written about her. Cecilia is a kickass protagonist in the story, and “No other noblewoman in Venice had made a career of any kind, let alone in the louche field of portrait painting.” She comes into contact with one of the main figures, Marcella Fasan, who also turns out to be a pretty good artist, and they flourish together. When Marcella is suddenly cast out to a remote convent in Peru by her evil brother, the last thing she expects to find is another art lover, yet here we have Rafaela the nun, who secretly paints and hates looking at religious images of the Madonna because “most of the time she looks like a prig. So smug.” With their mutual love of art, it’s not long before Marcella can borrow Rafaela’s tools and “the stem of the paintbrush remembered my fingers like a living thing.”

I think that Andrew Davidson should really get more attention for his novel, as it depicts so much more than just art.
But this is a great article pointing towards female characters portrayed as dedicated and hard-working.

This made me think of this awesome video:

A great list of books. I've always wanted to read a book by Virginia Woolf.

Thanks for the list. I'm sure there are many more books that address the woman as creator rather than muse, but they seem to escape my memory right now. I've always found that an interesting tension that doesn't get explored much. The real life of Christina Rosetti is an excellent example. The works of Plath also struggle with the creative impulse, though in the form of poetry rather than paintings. 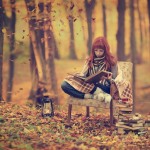 by Evette Dionne
Pair these books with cider.