In The Frame: Ingrid Berthon-Moine: Lipstick and Looking Twice

Germaine Greer once advised us all to taste our own menstrual blood. I assumed she was making a point more than genuinely advocating taking that brave step (a bit like when it turned out that adventurer Bear Grylls actually stayed in hotels whilst filming documentaries on how to survive in the wild—sensible boy, I thought), but it seems that some people are more than willing to take her word to heart and go whole hog. Ingrid Berthon-Moine photographed twelve women wearing their periods as lipstick, cleverly labeling each shot with a stereotypical cosmetics industry name, from Rouge Interdit to Action Red. This conjures up so many different associations: war paint, a trick played on sleazy men who get too close, generations of women having to hide their biological functions monthly and being scared of tell-tale red stains whilst simultaneously painting on crimson lips that meant something else entirely, that you’re feeling confident and flirty, that you want to look good. What makes this even more incredible is that it was a post-graduate MA project that Berthon-Moine submitted during her time studying Photography at the London College of Communication. She was still learning when she created this, not even a fully-fledged artist in the eyes of academia, and yet she pushed the subject of menarchy (menstrual anarchy) into the public conscience. She even caused an intense debate on Jezebel with Red Is The Colour (some viewers were squeamish; others yelled through their computers that this was not art; a third group rallied behind her work and told everyone to get over the shock factor and deal with it).

Another notable series by this artist is V (2010), where the female form is suggested by the contrasting images of men’s chests, as their shirts make a V-shape. Speaking about this series work on her website, Berthon-Moine said: “This merging of opposing signifiers collapses preconceptions and amounts to a humorous and brutal attack on prejudice.” Most people’s initial reaction is to look away when they think they know what they’re seeing, but a second glance means that they can contextualize the scene and realize that they’re engaging with the everyday rather than a top-shelf magazine shot. Psychosocially this series can speak to us about what it means to live in a world where men hold most of the power as voyeurs, and they can openly view sexual content without much embarrassment, whilst women have few comparative tools (it’s not like Playgirl ever really took off). The shots from V are powerful because they are not the unzipped peep show that Ingrid Berthon-Moine might have us initially believe—there’s just a button or two undone from some very conservative-looking cotton shirts. Perhaps the common reaction to V also serves as a yardstick for our tolerance levels with explicit content, testing how willing we are to stare back at these images or whether we’re just too unsettled by the connotations of intimate womanhood. However open you are to this kind of art, it certainly challenges our perceptions of sexism and photography in some way, and this is the kind of work that we should all be talking about as feminists.

I’m eager to see what Ingrid Berthon-Moine produces next. Having examined just two of her collections, I think she’s already a force to be reckoned with as a feminist artist. She isn’t afraid to make a point or to make us question the reality of what we’re seeing, and she isn’t worried about upsetting the male-dominated art world. This is one artist who proves that women should be ignored at your peril. 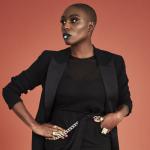