In the World's Most Lethal Country for Trans People, a Brutal Beating Sparks Protest | Bitch Media

In the World's Most Lethal Country for Trans People, a Brutal Beating Sparks Protest 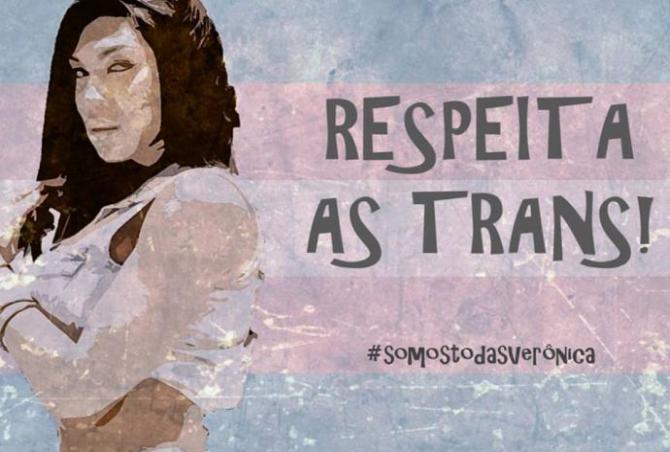 In Brazil, the case of a trans woman brutally beaten in jail has sparked a major conversation about police brutality and violence against trans people.

Veronica Bolina, a 25-year-old Brazilian trans woman from San Paolo, was arrested on April 12th. When she posted photos of her face on her Instagram a few days later, officials were so alarmed that they opened an investigation into what happened to her in jail. The photos show Bolina with a swollen face, partially naked and surrounded by male officers, with her hands cuffed behind her back. She says police brutally beat her, stripped off her clothes, and shaved her head.

“Those photos were shocking because of the violence, and [because] the police didn’t respect her gender identity,” Bolinas’s friend Alessandro Ramos told reporters.

The photos sparked national outrage and inspired the social media campaign #SomosTodasVeronica, or “We are All Veronica,” which exposes the pervasive dangers facing Brazil’s trans woman community. Transgender people face high rates of violence around the world, but Brazil is especially dangerous: More trans people are murdered there than in any other country, according to advocacy group Transgender Europe.

The Brazilian Grupo Gay de Bahia reports that 113 trans people were killed in the country last year—a number almost certainly lower than the reality since the country has no legal protections for LGBT individuals and anti-trans hate crimes are not prosecuted as such. In perhaps the most shocking piece of data surrounding this topic, the Rio-based trans group Transrevolucao estimates the life expectancy for a Brazilian trans person to be 30, less than half that of the general population with a life expectancy of 75.

The hostility toward Brazil’s trans community stems in part from an era of military repression, which followed a coup in 1964. The ensuing dictatorship, which reigned until 1985, painted trans people as deviants and threats to “Brazilian family morals,” according to Transgender Europe’s report on the topic. Trans people became largely excluded from civic life during this time and the term “travesti” (which generally describes a Brazilian trans woman) went from being associated with popular trans theater performers to bearing connotations of the criminal underclass. Trans people were hunted down regularly during this period by military police and vigilante groups. 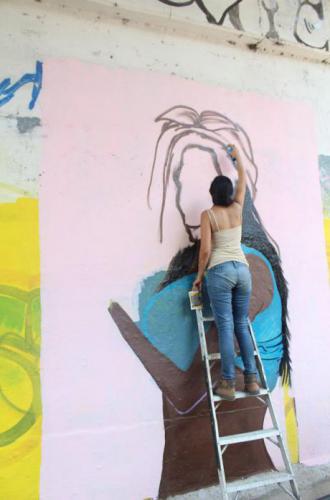 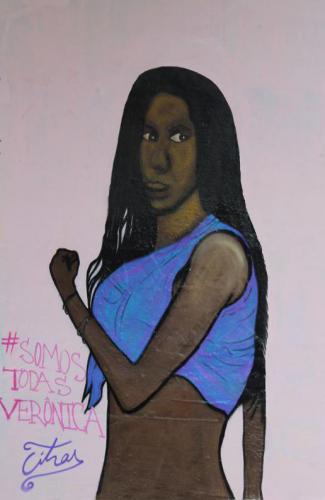 Those attitudes and patterns persist, according to the nonprofit group Global Rights: Partners for Justice, who paint a chilling picture in their “Report on the Human Rights Situation of Afro-Brazilian Trans Women.” The report documents a world where police arrest, humiliate, and even murder trans women with impunity, saying “extrajudicial killings” of this kind occur “in response to a trans person reporting a murder committed by police officers, and/or when police do not wish to pay for sexual services provided to them by trans sex workers.”

On the #SomosTodasVeronica Facebook page, with more than 19,000 likes, users share art inspired by Bolina, herself a glamorous Instagram enthusiast, as a way of both supporting her and expressing their pain and rage over the treatment of trans women in Brazil. While her story has been a national issue in Brazil, little has been heard from Bolina in the English-speaking media. Officials claimed she would be transferred to her own cell in a men’s prison, an arrangement cruel both in the isolating of its subject and its willful misgendering of her, but which, all too often, is viewed as a positive solution.

Bolina’s photos emerged against a bleak backdrop of police corruption and impunity, providing painful evidence of the terrible danger facing Brazil’s trans community. The outcry and activism that occurred in response provide hope that something may change. For instance, Human Rights Minister Ideli Salvatti says President Dilma Rousseuff supports a new LGBT rights bill. But the bill has yet to come up for a vote because—some activists claim—politicians in the legislature lack the political will to vote for it.

Gay Brazilian Congressman Jean Wyllys posted to the #SomosTodasVeronica Facebook page, writing, “In Baixada Fluminese, the state where I was elected (Rio de Janeiro), the crimes of hatred motivated by transphobia kills a travestis or transexual each day… this is also what is happening to the living Verônica, who was tortured, humiliated and exposed by the Civil Police in São Paulo.” We can only hope Bolinas will heal from the abuse she’s suffered and that her terrible ordeal will continue to bring attention to the injustice trans people face in Brazil.

Related Reading: When Politicians Fail to Stand Up for the T in LGBT.

Leela Ginelle is a trans woman playwright and journalist whose work appears in PQ Monthly, Bitch, and the Advocate. Top photo via Creative Commons.

Bolina deserve so much a space here at Bitch.

P.S. The name of the State is São Paulo ( not São Paolo - it is not Italian, is Brazilian).