In "Under the Skin," Scarlett Johansson Subverts Her Vivacious Reputation | Bitch Media

In “Under the Skin,” Scarlett Johansson Subverts Her Vivacious Reputation 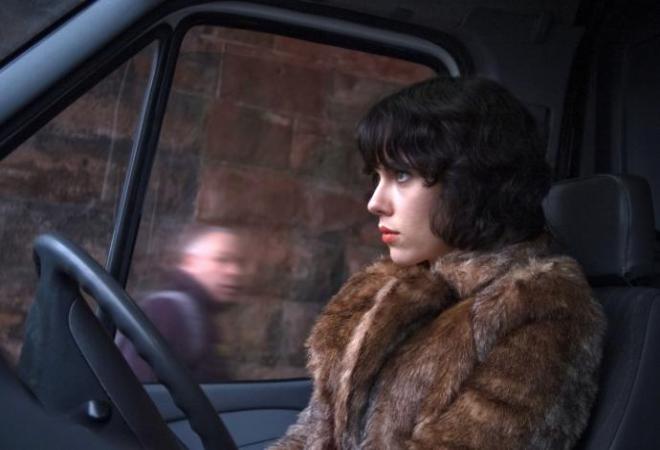 In most tales of alien infiltration, the extraterrestrial life force arrives heavily armed: death rays, mysterious pods, killer black ooze, and the like. In unsetting and surreal sci-fi film Under the Skin, Scarlett Johansson arrives equipped only with a sexy female form, a winning damsel in distress routine, and a robotic desire to consume. Of course, she is a highly effective predator.

Under the Skin director Jonathan Glazer is best known for his avant-garde music videos and stylistically adventurous films Birth (2004) and Sexy Beast (2000). His dreamlike style is immediately apparent in this new film, which begins with a long shot of an abstract shape. Is it a sun? An eyeball? Slowly, the screen takes the vague form of planets and a small dot—a spaceship? Cut to: waterfalls, a lonely road, a single motorcycle headlight and a chorus of anxious violins.

The central character has no “story”—no origin tale, no explicit motivations, no apparent inner life at all. This lack of exposition is refreshing. There are a dozen tropes for otherworldly female killers, but this film’s sensual alien is no succubus or siren. Instead, she is a sarlacc pit: all consuming and simply unknowable.

After she emerges into the world and applies a fresh coat of lipstick, the alien proceeds to spend her days and nights driving a truck in circles around Glasgow, peering out at the passing crowds for her prey. When she spots a lonely looking man walking alone, her tractor beam is extremely simple: she rolls down her window, asks for directions, and then strikes up charming conversation. She invites the man to come with her and, one after another, they often do. She moves with a mechanical precision, seeming to promise sex. The men follow her, they disappear, and the scene starts over: same van, different day. From an alien standpoint, our kind is so easy to control.

Much of Under the Skin lingers on the mundane details of normal life, seeing them at a distance. Traffic. Shouting crowds in the street after a football game.  Stop lights. Lines outside a club. Under the dispassionate gaze of an alien, human life seems like a pointless montage. It’s impossible to separate Johansson from the character she plays here, in part because the alien itself has no backstory to embody and in part because the much-discussed gorgeous features of Johansson’s face fill many, many frames. Under the Skin certainly highlights the breadth of her repertoire: this provocative, quiet film was released in the United States on the same day as Captain America: Winter Soldier, in which Johansson plays the distinctly more traditional femme fatale Black Widow.  In Under the Skin, it feels like Johansson and the filmmakers are playing a joke on her stardom. While critics gush over her absolutely vivacious qualities, as the alien Johansson is essentially lifeless. She is the opposite of her enchanting reputation: she is devoid of meaning beyond her job as the world’s premier soul-sucker.

But something changes midway for this unfeeling alien. After leading men to their doom one after another with no signs of emotion, one victim strikes her as a bit different. Something about the experience is off. It seems to shake the alien up and she develops a glimmer of empathy. Soon, when she finds herself alone in room with a mirror, she looks at herself and seems to realize for the first time that her body is more than a vessel. Strangers have seen her human form as a body all along and suddenly she does, too, moving her hands over her unfamiliar skin, scrutinizing her every angle and limb the way I remember doing as a teen.  And just as like many teens, the alien’s cognizance of her body brings with it fear. 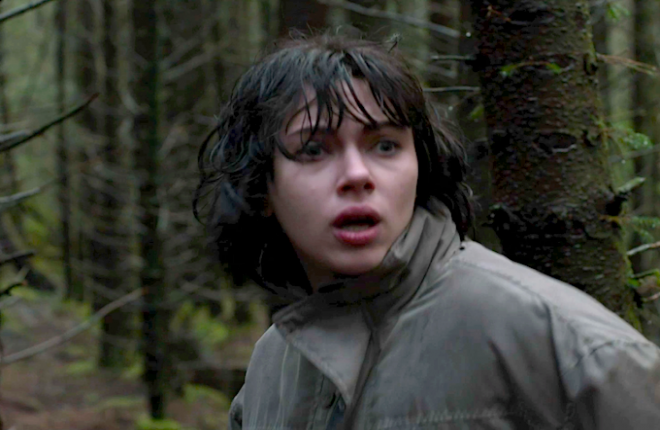 Soon, in her first sudden movement of the film, the alien leaps with the realization that she has a vagina. Sitting on the edge of a bed, she leans over and grabs a lamp for closer inspection. Bewildered at what she discovers, she literally flees the scene. Instead of moving through the world with a clear and single mission, she begins seeking something. She explores the Scottish countryside directionless and wanders, alone, into the woods. There, she becomes hunted. It’s a terrifying and lonesome turn of events for a creature that was once a champion killer.

As an alien, Johansson was fearless. As a woman, she realizes that while her body is certainly powerful, she is vulnerable in this strange world.

I'm going to see this tonight because your review cemented my interest. I'm so excited!! I've always liked Scarlett, and I'm glad to see her taking innovative, weird roles (I liked her in Don Jon and Her as well, so much so that I wrote about it here: http://themonstermaven.com/2014/01/27/spike-jonzes-her-and-other-human-c...)

Thank you for gorgeous thought-provoking review. I love the subtlety with which you link the movie's alienating arc to more familiar personal and political experience.

A very thoughtful review, but.... Surely you could review this movie without giving away the twists and turns of the plot and character development? I understand that there's more to this movie than you have written, but still, it feels as though you've removed a little of the enjoyment and surprise that we might have experienced as our preconceptions of the genre and actress are overturned. Sorry for this one criticism... Otherwise excellent.

I don't like reviews that lay out the plot too much, either, but I consider this a spoiler-free review. It explains generally what happens in the plot with enough detail to explain the mood of the movie and paints the outline of a few scenes, but it doesn't give specific information about what happens to the main characters or why. I tried to maintain a balance of giving enough detail to support my analysis of the movie without revealing the whole plot.