Tube Tied: In Which I Gingerly Criticize Jon Stewart 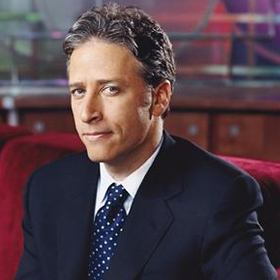 Like many a thinking lady I watch the Daily Show mostly for Jon. When it is on hiatus, and it always disappointingly seems to be on hiatus when America goes a little mad in the late summer (2005: Katrina, 2008: Sarah Palin, 2009: Health Care Nonsense), my evenings seem even less magical than they usually are. I am the kind of woman, you see, who would go for Jon - funny, informed, irreverent - over a Brad Pitt in a second. I know I am not alone in this.

But as happens in any relationship, sometimes Jon does things that well... piss me off. See, every once in awhile, his show displays all the symptoms of having been written by Liberal Dudes Who Don't Quite Get It - It usually being women, or women's rights, or women's issues. The show likes to trot out Samantha Bee and Kristen Schaal every once in awhile, but in general it seems rather complacent about its overall dudely tone. And it's easier to take some times than others.

Take, for example, Monday night's episode. A propos of absolutely nothing, it opened with a joke about fat people, or probably more descriptively, Jon in a fat suit. The joke, one supposes, was that he was fat. From you know, eating bad food. Which is apparently why fat people are fat. Or at least why Fat Jon Stewart Is Disgusting. In case we hadn't picked up on this highly subtle message (this is, after all, one of Eddie Murphy-post-funny's go-to gags, the fat suit), the show sent John Oliver out to castigate Jon for... eating junk and being fat. Okay, great. I'm really glad you had this little moment to make a fat joke, Jon, except that it was kind of beneath you, and were I in your circle of acquaintance, it would have gotten you a smack upside the head. Not all comedy is successful, I realize, but when the animus is just plain old "fat people are gross ha ha" I think it's fair game to say you're being mean-spirited, and not really that funny to people who like smart comedy, you know, like the viewers of your show.

I tried to forgive and forget. But then I tuned in Tuesday night and was treated to a charming segment on ACORN. (If you haven't heard about what ACORN, a sort of large community service provider, was caught doing, you can catch up here.) Now look. Stewart was perfectly right to criticize ACORN for offering tips on how to cheat on taxes, and to do it in front of a liberal audience that was probably a little uncomfortable about what they saw. But it seems to me the whole thing was a rich enough mine for comic material there without making fun of sex workers. Which is what Jon proceeded to do, subtitling the segment as "The Audacity of Ho's [sic]." He made implied equivalencies between pimps and prostitutes and he suggested titles for their work like "genital contractor" (nice reduction to anatomy, there) and "used vagina salesman" (used vaginas are gross, man!). His only joke that really didn't depend on the stigma attached to sex work was to make fun of ACORN for advising would-be-traffickers on how to claim imported El Salvadorean thirteen-year-olds as dependents. In essence, the man behaved like a giggling high schooler confronted with prostitution as a practice for the first time. And it, too, was disappointing.

I know some will say that I need to lighten up, or Trust in Jon (if I manage to get one post on Bitch where someone doesn't tell me to wait and trust the show, I'll eat my summer flipflops). But if that's your impulse, I want to remind you how often feminists get told they need a sense of humour, or to stop being so superficial (he's really a Good Guy), so prone to finding politics in everything, why can't they just enjoy life, etc etc. We can put up and shut up when our idols and, um, imaginary future husbands and wives behave poorly. Or we can remind them, as I would like to remind Jon Stewart, that we know they have a commitment to being decent human beings. We know they have a commitment to equality. And all we're asking of them - and so, of the Daily Show - is that they do a better job of living up to that.

I have loved the Daily Show ever since JS took it over, but you're absolutely right that sometimes his Liberal Dudes Who Don't Get It bias shows - and it hurts my feelings, honestly (as opposed to more egregious sexist posturing, which makes me angry and determined to Show Them All) because I know he knows better. I know he knows that sexism exists, and is a real problem, and that there's more his show could be doing to promote women instead of relying on sex jokes and bathroom humor and meanness.

And that's what it feels like - it feels like your cool brother and his friends who you like and look up to turned around and called you a fat slutty loser. And that sucks. I hate it when people tell me to "lighten up" over pieces like this on the DS or the Onion because you know, the pieces aren't "light" - when I'm watching/reading and laughing along, sexist jokes bring everything to a crashing halt. I would <i>love</i> to just let it roll off my back, but you can't just ignore a nail in your shoe because you'd rather keep walking.

Sometimes he and his boyos resemble nothing more than a crowd of overgrown teenagers. I totally cringed at both these pieces. Ho jokes? Fat jokes? Come the fuck on.

Comedy-wise, it shows a remarkable lack of edge and imagination, which Jon and his writers usually do so well. With everything that's going on in the news today, he makes fat jokes? That's just plain lazy. I can see that shit at any bad comedy club anywhere in the country, and get a free watered-down drink in the bargain.

I'd be really interested to know more about JS's writers... and Stephen Colbert's for that matter. Both shows frequently make offensive remarks about fat people and play into tired tropes about "terrorists" (Gitmo Elmo) and women's sex appeal, which is an indication that their writers aren't representative of these groups. Perhaps we need a feminist version of the Daily Show/Colbert Report to make fun of these guys for the dumb things they say, huh?

No, I agree. I quite watching a while back because the writing was getting rather sophomoric. Definitely has lost some of its intellectual edge.

I love Jon Stewart, but I was cringing throughout the whole "Fat Jon" sketch. I didn't even see the reason for it, especially when there has been such insanity in the news these last two weeks that would make great joke fodder. I was so eager for their return, and they started with irrelevant and offensive slapstick. It felt like bad filler.

I agree that he can be insensitive to women in his jokes, although I did not see last night's episode. I mourn the lack of female contributors, especially because it seems like a majority of the stories/commentaries by Samantha Bee and Kristen Schaal are about "being a laydee" or at least have a large emphasis on gender. The Daily Show was long criticized for a lack of racial diversity, and until the last year or two when they hired Aasif Manvi, Larry Wilmore, and Wyatt Cenac, the criticism was valid. Hopefully this year will bring many new female correspondents, but I'm not holding my breath.

I agree. Most of John's commentary is enlightened and enlightening but he has some big blind spots, often in the area of women.

I was complaining the other day actually about one of his regular jokes - riffing on the 'you throw like a girl' meme. Ugh.

I absolutely agree. His "used vagina salesman" comment seemed to be less about ACORN and more about "Hee hee sex workers are funny!"

When I put the show on on Monday night I was SO excited to have it back and then....yeah. Ugh, and the Brian Williams picture? And the cheese-steak milkshake? cause haha fat people eat horrible repulsive shit. It was all just so bad. What were they thinking? Who were they aiming this towards? Why? Just fucking why? With the WEALTH of topical issues they had to mine for the opening of the show, why THAT?

Haha.. Just kidding. I think that what most people don't get when they tell feminists to "get a sense of humor" is that this "joke" is representative of society as a whole. The fact that he can make these largely uncriticized jokes shows that society is okay with subjecting certain people to a "less than" status. And it's not right. Jon Stewart needs to realize that by making these jokes, he's doing his audience a disservice. The smart social commentary that he often gets right is really what will appeal to his target audience and keep them from changing the channel.

I admit I'm ignorant because I don't have cable and I have never seen his show but for snippets. Or maybe just jaded, or maybe unsmitten and therefore objective? I just feel like getting it off my chest that you'd think the man were out spouting some seriously, thought out feminist rhetoric the way feminists practically wet their pants over this dude. Is he that liberal and funny? Or are our standards low? People used to say "my boyfriend Jon Stewart!!" on a feminist message bb I used to frequent like it was original. Are we that excited about a man on TV just b/c he's not a complete idiot and traditionally sexist (oh wait, he actually is?)

I totally agree. I don't really understand the appeal of Jon Stewart anyway, and I think the whole "smart humor" thing is played up in his case. There's nothing informed or funny about sexism or fattism.

Yeah, the Audacity of Hos and "used vagina" things were pissing me off too. I'd still marry him, though.

I totally agree, and I'm so glad you wrote this post because it is EXACTLY what I was thinking when I watched each episode. I thought the show was saying "you are a bad person for being a prostitute" rather than "you may be wrong for wanting to dodge taxes". The writers seem to think that their audience would agree with them that "not paying taxes is bad, but prostitution is worse" - an argument that is clearly soooo far from a being closed book. Lazy humor, that was both immature AND sexist... so disappointing.

It's been a while since this episode aired so I don't remember my initial feelings about it except what some have already said - being disappointed by what I was presented with after what felt like a long wait for the DS's return.

Honestly, like previous posters, I haven't been watching it lately. I don't if it's b/c I've been busy or b/c I've just lost interest in what they talk about or b/c I've felt like the show has lost it's edge.

In a reply to an above poster, the reason women like him so much is b/c he seems light years ahead of a lot of the men we commonly see on TV as far as being intelligent and sensible (most of the time), and often adorably funny, too. But no one is perfect. I still love him, but I lose a little bit of respect for anyone when I hear them make a fat joke. I'm not wild about sex worker jokes, either.