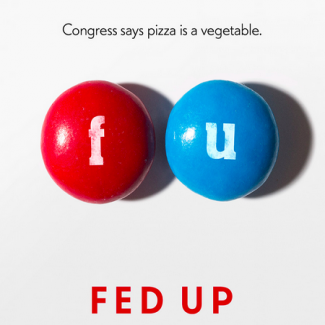 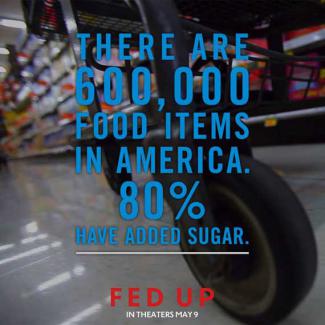 A portion of the poster for new documentary Fed Up and an factoid from the film.

The line between legitimate health advocacy and body shaming is a precarious one. So what does it look like when yet another food documentary sets out to “revolutionize” the way Americans think and eat, and also “cure the obesity epidemic”? Well, let’s say that things get messy.

Fed Up is the product of Laurie David, producer of An Inconvenient Truth, and television host and journalist Katie Couric.  At the heart of the film is the message that the U.S. food industry is screwed up: we’re drowning in bad policy and shady lobbying, with big businesses controlling our food systems. Couric cites data that says that unless some major reform goes down, an estimated 95 percent of U.S. citizens will be overweight or obese within two decades.  So, we are invited to voyeuristically peer into the lives of four overweight adolescents from varying class and ethnic backgrounds as they struggle to lose weight.

Sadly, the benefits these families gained from being filmed for Fed Up—if there were any—seem lost as the film feels more exploitive more than revolutionary.  Throughout the film, shout outs to the food policy knowledge of a bunch of skinny white guys abound (what’s up Bill Clinton, Michael Pollan, Mark Bittman, and Jamie Oliver) and the experiences of people of color and poor people are ignored.  The film is full of shots of faceless fat people eating, walking, and you know, just living. While the film has ostensibly good intentions, the final product is definitely a mixed bag.

This point of this documentary is to scare you.  They want you to know that there is a clear disconnect in the current U.S. food system that values profit over public health.  Looking at Kellogs’ partnership with Michelle Obama in her Let’s Move campaign and the Coca Cola-backed medical studies on soda shows just how much big companies have a say in “health” issues.  Fed Up will teach you that “soda is the cigarettes of the 21st century” and  that calories aren’t everything.  But panic and fear are what can bring about change and Fed Up isn’t shy of using that angle.  The issues above are all valid and seemingly fact-based, but the importance of “our food system is corrupt” is muddied when the filmmakers straight up bite off more than they can chew.  You cannot thoroughly tackle all of the proposed issues in ninety-minutes alone, and frankly it shows.

Off the bat, Fed Up claims to object the popular belief that if people just ate less and exercised more things would work out.  Yet in arming the audience with an even deeper hatred for lobbyists, sugar, and soda for about 86 minutes, we are simply told in the end that the only way to stop being fat is to completely change our diet.  While the film points out many ways our policies and economy encourage eating unhealthy food, the “solution” the film offers is still feels like it’s placing the onus on individuals: the experts suggest that households should cut out all added sugars and cook “real food” at home, forever! Never mind that cooking three balanced meals full of organic foods at home takes time and money that many Americans simply don’t have.

The film leaps through hoops of all sorts: weighing whether sugar or cocaine is “worse” (hint: it’s sugar, duh), offering a clip of 12-year-old Maggie crying about her inability to lose weight even while exercising, talking about how terrible school lunches and vegetable standards are (pizza, anyone?), how advertising targets children, and revealing that the fact that nutrition labels lack of daily sugar intake percentages are not coincidence.  They let you know that all calories are not created equal and that 100 calories worth of soda is worse than 100 calories worth of almonds.  Why? Because what everything boils down to is that sugar is the worst.  If you’re not sure about that within the first five minutes of the film, Fed Up will surely let you know just how terrible sugar is for you, your family, and the health of future generations in the U.S. Just look at the families they follow in the documentary! They’re proof.

While it’s great to hear people poking holes in the current calorie-counting obsession, this film is doing it for the wrong reasons.  Even though they’re telling us not to blame people for being fat, they’re still telling us that fat people are a problem in the first place and we are all doomed to be fat too if we don’t act fast.  The fact that global nutrition standards and policies are being created on false pretenses should be reason enough to be upset.  Linking it to fatness only further instills the idea that fatness is shameful and unhealthy. 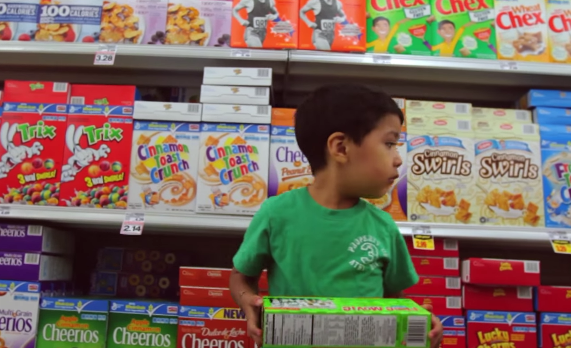 A still from Fed Up’s trailer.

One of the film’s most blatant, privilege-ridden oversights is that it never seriously addresses issues of race, class, income, and lack of resources (food deserts, a kitchen to cook in, etcetera).  In a scene where one son’s mother spoke of making better choices by buying her son’s favorite flavor of Lean Pockets instead of Hot Pockets, I wondered if the crew of Fed Up ever warned her that her logic would be used to demonstrate unintelligent food-buying.  I wondered how 15-year-old Brady felt after he regained weight when his family stopped maintaining the extreme sugar-free diet they tried out for a few weeks.  I wonder how Joe’s family is coping with the medical bills after the 14-year-old underwent bariatric surgery.  None of that is mentioned.  What’s obvious is that eliminating “all products that contain sugar including honey, molasses, agave, etc., and all liquid sugars, such as sodas, bottled teas, fruit juices, and sports drinks” is really hard to do. And while it very well may be true that a home-cooked “REAL FOOD” dinner of chicken and a salad may cost less than a KFC family dinner, the time, transportation, and food accessibility need to be considered.  For a well-funded documentary on an “epidemic” that disproportionately affects low-income families and people of color, the failure to even attempt to address those issues is insulting.

Fatness doesn’t automatically mean you’re unhealthy and thinness doesn’t automatically mean you’re fit.  It would be cool to see celebrities in vegetable ads, like Fed Up suggests.  And adding a warning label to soda would probably make a positive difference.  Although telling people to “take action” by eliminating sugar would likely make someone’s body feel good after a while, not all Americans are afforded the privilege to find that out.  If this “epidemic’s solution” is to follow a rigid diet and home-cooked meals, then the reality that those most “plagued” by fatness won’t really have a say in their condition.  While suburban Sally is making “real food” from her organic garden, there are plenty of others who cannot afford the 25-minute drive to and from the grocery store to cook a chicken for an hour and make a salad.  They might have to work a double in order to provide that “fake food” so that their families don’t go hungry.  But be forewarned: Fed Up is just not the film to debate those very real issues.  There may be some interesting things to unveil, but when it comes down to it, Fed Up feels like just an fat-shaming documentary sure to make others feel fed up by the end of it, too.

Emilly Prado is a former Bitch editorial and new media intern who studied social work and education at Portland State and has since been juggling various child-related jobs and writing gigs.

As you mentioned... one can address all aspects in 90 minutes. It sounds like (I have not has the opportunity to to see the film yet), that the makers was attempting take a broad stroke on subject. While there are many demographics that don't have the privilege of time and money to make home cooked food, there are hundreds of thousands that are but aren't aware of the corruption of the food industry. And if those hundreds of thousands can be better informed then maybe they can bring about policy changes that benefit us all. I know its an extraordinary happy sunshine thought but it a possibility.

It would be great if we could change policies to make it easier for everyone to eat healthfully. While I don't think we should ever shame anyone for her eating choices--it's really none of our business--we also shouldn't put all the onus for change on policy. Is there anything wrong with telling people to eat less sugar? Almost anyone could cut her sugar consumption to some degree or another.

I am all for calling out politicians and manufacturers to help us eat healthier. But I am also for people having the tools to make healthy decisions. Some of these tools--time, money, access to healthy food--are out of reach for many people. A documentary simply cannot give people time, money, or access to healthy good. But it can give people the knowledge they need to eat a little bit healthier.