Anyone who gets geeky about gender, numbers, and comics should check out Ladydrawers today! Writer and artist Anne Elizabeth Moore teams up with a female comics artist to produce comics explore various inequities within the comics industry—from who’s being hired, who’s being printed, and who’s inside the pages (and how fully dressed they are!). Here’s some sample pages….

From “In Comics World, Women Are Invisible - Except When They’re Naked” illustrated by Sara Drake From “Why Are There No Great Women Comics Artists?” illustrated by Christa Donner From “Comics Publishers: Who Are They?” illustrated by Lucy Knisley This isn’t the first time Moore has tackled the numbers behind gender inequity in comics collaboratively. In 2010 she and James Payne edited the Women’s Comic Anthology, an illustrated collection of gender and race disparity in the comics industry—and it’s available as a PDF! Bitch readers might also remember when she and Esther Pearl Watson teamed up for the “Gender and Comics Potluck” (Confidential, #49), an illustrated feature on trans and women comics artists (now in poster-form!).

In the most recent Ladydrawers installment, MariNaomi illustrated the stats behind male vs. females creators of some of the major comics publishers compared with the manufacturer’s suggested retail price, with a promise to follow up next week about what those numbers might actually mean in terms of labor and income. Here’s a revealing sample panel….

For less depressing stats, take heart knowing that the Small Press Expo (SPX) recently held in Washington D.C., featured women prominently in their line-up (Diane Noomin what!). Ladydrawers brings attention to disparities in comics (acknowledging that these numbers, these samples, and these collecting methods are just one piece of the larger story) while promoting female comics creators. Check back at Truth-out.org for more Ladydrawers updates!

Relevant: Back in The Olden Days 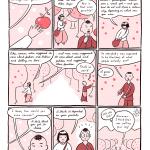 by Mari Naomi
MariNaomi gives us a glimpse of the future of gender.