Jessica Price works as a project manager at tabletop roleplaying game publisher Paizo Publishing—a progressive company with a female CEO. But Jessica’s career reaches across jobs and companies. In the worlds of video and tabletop games, her experiences have run from sexual harassment to seeing real and positive industry change.

Who do you find it difficult to get respect from in the gaming industry? Or has your experience been largely free of sexism?

Some of it’s unintentional. Male programmers will be shocked by the idea of making the default avatar female for a game intended primarily for female audiences. Marketers will think that making a console pink will magically fix its branding problems with women. Studios making games intended for kids and moms will refuse to give a successful female game designer an interview because she’s never done a first-person shooter. And regardless of your actual job title, new male employees will assume you’re the receptionist, ask you to clean up the kitchen or conference room after them, and believe your ideas came from your male coworkers.

But some of it’s very intentional. I’ve had every inch of my anatomy commented on by coworkers. I’ve had marketing guys propose that our marketing should consist of me putting on a low-cut top and talking about our product. I’ve had people insist that I must have slept with someone to get into the industry. I’ve had guys I disagreed with in meetings suggest that it’s because I’m on the rag.

I’ve been sexually harassed, and had the people I went to for help tell me I must enjoy the attention, instruct me to deal with it because they didn’t want to fire the guy, and warn me not to go to HR because I’d get fired for being a troublemaker. One guy had a history of violence, and clenched his fists and came close to taking a swing at me when I told him he had to stop touching me and talking about my breasts. The response from my chain of command was still, basically, “Deal with it yourself.”

How has the games field changed for women since you started working in it?

Changing how an industry views women tends to be evolutionary rather than revolutionary. It’s gradual, but there are things happening that I think are important—men who grew up in the era when women were mostly stay-at-home moms are retiring, and the men replacing them don’t see female managers and coworkers as unusual. The men between those two groups are reaching the age where they’re getting married and having kids. They’re able to realize that they would be furious if the women they love got treated like the women they work with. The third is that there are more women in leadership roles—as executives, writers, creative directors—than there used to be.

In the past year or so is that the role and treatment of women in the industry has come under a lot more public scrutiny. The violent reaction to Anita Sarkeesian’s work called attention in a very dramatic way to how different the conversation is in the industry when a woman says something controversial than when a man says it—and how high the price can be for women who publicly express an opinion.

There’s been a lot of backlash, but at least it’s getting talked about openly now.

So it is getting better, and I believe it will continue to get better. There are more and more people making games with an exuberant disregard for society’s baggage around what men versus women are supposed to be. That’s the future.

When have you felt supported as a woman working in the industry? Where do you find supportive peers in your field?

You do find male coworkers (usually those who have daughters) who notice misogyny and are disgusted by it. They understand the importance of having female characters represented—and represented as more than sex objects—in games, and they’re vocal about it.

I had a producer who didn’t believe me at first when I pointed out to him how much more often women got interrupted by men in meetings and just in conversation. Once he started paying attention, he started doing things that seem small—for example, when he was speaking with a female coworker, and got interrupted, he’d say, “Hang on, I’m talking to Anne right now; I’ll be with you in a minute.” Another guy started pointing out that he didn’t like the word “slut” as applied to the female characters in the games he worked on. These things made other men start paying more attention to how they were treating and talking about women.

I now work for Paizo Publishing, makers of the Pathfinder pen-and-paper roleplaying game, and we have a female CEO. The company is (by my estimate) about 30 percent female, and I have a significant number of gay and lesbian colleagues. The difference is amazing. I haven’t experienced any sexism from my colleagues here. For the first time in years, I get up in the morning and go to work without feeling like I’m headed into hostile territory.

This is the last installment of this guest series on gender and gaming. Thank you so much for reading—and may you always roll 20 on your Save vs Sexism.

This picture of Jessica Price reminds me of Applejack. I think she is a positive female rolemodel.

Since I liked D&D 3.5, which Pathfinder IIRC kind of evolved out of (or so I've been told, at least), I've occasionally considered picking it up.

Hearing how much friendlier they are for women employees makes me definitely want to pick up one of their titles though. Which is refreshing, since I'm used to being turned OFF of a company or whatnot by news of how they treat their employees, not on to them :)

*sigh* I'll be a bit before I can afford it though. Especially right before MegaCon. I mean, I really can't skip it this year, Gail Simone is going to be there! GAIL. SIMONE. So yeah.

Note that the pathfinder rules are ALL available free online, either through the company's website (the PRD) or legal 3rd party sites like d20pfsrd.com.

You'll still want to pick up some books because the production quality is second to none, but the entry cost for the game is technically $0.00 (after the cost of your internet connection).

I totally agree with this sentiment. I have two daughters, and it really makes you aware of how you would feel with your daughter being exposed to this sort of behaviour. Granted, I always tried to not be "one of those guys," but where back in the day I may have ignored it off as not being my business, I am now more likely to actively discourage even mildly misogynistic behaviours.
I'm glad to hear that Paizo is a great place to work, it's always struck me as a well run company. Still have all the early Pathfinder stuff (Rise of the Runelords through to the early beta). 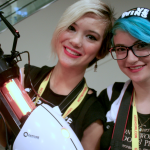