Interview with Kay Cannon, the Hilarious Writer Behind “New Girl” and “Pitch Perfect” You may have never heard Kay Cannon’s name, but you’ve definitely laughed at her jokes. An alum of Chicago comedy group The Second City, Cannon landed a job as a writer and co-producer on 30 Rock. Tina Fey wrote of Cannon in Bossypants: “Her success at the show is a testament to why all parents should make their daughters pursue team sports instead of pageants.”

These days, Cannon she is currently a writer and co-executive producer on the television series New Girl starring Zooey Deschanel and is the writer of hit 2012 comedy Pitch Perfect and its just-announced sequel.

Cannon took time from her busy schedule of nursing, writing and being hilarious to answer a few questions for us.

ANNE MCCARTHY: You are a wife, a new mom, and an Emmy-nominated writer on a hit TV show. What do you say to people who ask, “How do you do it all?!” and how annoying is that question?

KAY CANNON: Not an annoying question one bit.  My answer is this: I don’t do it all.  Not even close.  I work on a show with a kickass writing staff, I have a kickass partner of a husband who is there for me at all times both personally and professionally and, I don’t mean get too braggy here… but I have a kickass baby, too.  She pitches jokes and shits at the same time—a real multi-tasker, that one.

At the end of the day, no one ever does anything all by themselves.  I never quote anybody, but I do agree with something that legendary women’s college basketball coach Pat Summitt once said which is, “Make sure you shave that before the game.”  Wait—no, not that quote.  I’m certain she’s said that more than once.  It’s, “You win in life with people.”  I love that quote and couldn’t agree more.

You are an alumna of Second City. How did your time there shape you as a writer and as a human being?

Second City was the first job I ever had where I was made to write.  I was so scared— and not very good at it.  Even if I came up with some decent ideas, the thought of sitting down at a computer and writing a draft of something that others would read was very intimidating to me.  Especially since I considered myself mostly as a performer.  I can remember telling a fellow Second City cast mate that I could probably put together a decent writing submission for SNL if I worked really hard on it.  But then if they liked it and hired me, I would have to be a writer!  I couldn’t think of anything worse!

The Second City was a job where you had to write or you wouldn’t get paid.  Luckily, it was a wonderful education in how to use my improvising skills and techniques to help my writing and vice versa. As far as what Second City did for me as a person?  Well it’s a great place to make connections with other people that last a lifetime.  Some of, if not most of, my dearest friends I met at The Second City.  It’s a wonderful community.

What are your favorite kind of characters to write?

I guess goofball characters.  It’s really fun to write lines for 30 Rock’s Tracy Jordan or New Girl’s Schmidt.  When a character can get away with saying almost anything, it opens the door to some good times.

Your film Pitch Perfect was a huge hit and a fan favorite. How did that project come about?

In the first year of 30 Rock, there was a line in a script about the character Toofer being in an a cappella group at Harvard.  I thought it was a hilarious, made-up joke and laughed a little too hard at it.  My boss, Robert Carlock, informed me that collegiate a cappella groups actually exist and are pretty popular on East Coast campuses.  I had no idea!  A Midwesterner like myself was not aware of such a thing!  I literally said in the room, “Someone needs to write a movie about that!”

As much as I wanted to write about that world, I had no familiarity with it and didn’t have time to do the research—a fact that I told my friend (who is also the film’s producer) Elizabeth Banks.  Well a year or so later, I got a call from Banks about a book that was coming out called Pitch Perfect.  Written by Mickey Rapkin, the book detailed the author’s experiences following several collegiate a cappella groups around for a year.   I was so excited!  It was the research that I needed!  All I had to do was read the book!  Eighteen months later, I knew the story I was going to tell!  I kid.  I read that book so fast.  It highlighted the fact that women are considered underdogs in the competitive a cappella community and that became the focus to our story.

We (myself and Brownstone Productions) sold the pitch to Universal and that sale got us the rights to the book.  I wrote the first draft of the screenplay during the third season of 30 Rock and it was finally made during Rock’s sixth season.  It took a while, but I’m extremely happy with the results.

In the male-dominated field of comedy, women like Amy Poehler, Tina Fey, Mindy Kahling and you are taking over the comedy TV landscape. Why do you think this shift happened?

I don’t know if the numbers yet signify a real shift, but I do think that Poehler and Fey (as well as a slew of other ridiculously funny and talented ladies who write and perform) found ways in which to showcase their skills where you either forgot or didn’t care what their gender was.  They’re just funny.  End of story.  And I would imagine that they don’t sit around thinking about how exciting it is that, as women, they’re “hanging with the boys.”  It is by their example that a whole generation of women have been given greater opportunities that for whatever reason didn’t exist.

What are some of your favorite comedy films? And who are new comedians you like?

There are so many! Anchorman, Tootsie, Major League, Weird Science (I stand by that one!) New comedians?  Not sure how “new” they are, but I’m a big fan of Danny McBride, Tig Notaro, Lauren Lapkus, John Mulaney, Ellie Kemper, Dan Bakkedahl, Key & Peele. There are a lot that I’m forgetting right now ‘cause I just had a baby!

What is the most difficult part of your job?

I guess working on different projects at the same time.  I have a love/hate relationship with consistently doing that day-in and day-out.  I just live in constant fear that it’s all going to go away.

We discuss New Girl in our recent podcast episode that’s all about Fall TV. 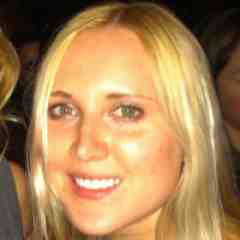