The world’s biggest flirt has triumphed over a social revolutionary on the pop charts: A few days ago, Carly Rae Jepsen and her flouncy seven-week chart topper “Call Me Maybe” finally unseated Lady Gaga’s “Born This Way” as the longest-running number one single for a female singer with the Interscope label.

The Gaga-meister, never one to be defeated, tweeted a (supposedly/hopefully) playful retort to CRJ: “@carlyraejepson [sic] I SEE you just swooped in and broke my BORN THIS WAY record of the most weeks at #1. DONT GET COMFORTABLE IM COMING FOR YOU.”

But competition scaries aside (um, hi, I would NOT want to be on Gaga’s bad side. Carly Rae, there’s a spare bedroom here if you need somewhere to lay low for a while…), Jepsen’s scoring this record raises a lot of questions about the zeitgeist-y implications of her thriving tune.

Jepsen is almost universally acknowledged to have perfected this era’s breezy, irresistable, superficial, fun—if flimsy—song of summer with “Call Me Maybe.” And this is what dethroned Gaga’s lyrically complex and philosophically empowering cultural anthem celebrating individuality in all its forms. Not that either of the tunes is more worthy than the other based on its philosophy… I mean, they both make me want to smile and wiggle and kick my feet around (this is my version of what most people refer to as “dancing”). But the two singles are about profoundly different things. Flirty summer fun won out over social comment, according to the dollars we are paying for the music they are making, and that means something.

And yet, since this ideological overthrow was executed in the arena of pop music, the philosophical shift our iTunes purchases are fueling is not being discussed in the same way it might be if we were talking instead about domestic themes culled from the latest Jennifer Egan book or other pieces of more “worthy” art. And I know about that stuff.

See, I used to be a music producer at a radio show that played somewhat more thoughtful stuff than just slammin’ Top 40 beatz. Music that referenced Greek myths. Music written by people with MFAs. Listening to chart-topping jams in my spare time was my shameful secret. I was permitted to  broadcast pop music of eras gone by because it had accumulated a patina of authenticity, history, establishment. But modern pop music? Not worthy of a thoughtful woman’s appreciation. And so, on the outside I was a thoughtful music fan, and on the inside I would get jiggy when I heard a few strains of Rihanna.

But then I moved abroad for a few years and heard the exact same Top 40 music blasting from buses in Barbados and bush bars in Nigeria and I realized this pop has a real power. It’s shaping our understanding of love and money and women all over the world. And this is an especially interesting gendery musical moment, where Beyoncé is telling us that girls run this mutha, where 50-something sexual revolutionary Madonna is trouncing around in a sexy high school band uniform giving nip-slips, and where little girls wearing tutus are becoming YouTube sensations for belting along to sexually explicit Nicki Minaj tracks.

These little musical mutinies over what’s expected of women are no different than Jane Austen suggesting in her novels (which were themselves considered low culture in her age) that female characters had non-conformist thoughts and feelings. But Jane, to us, is totally legit, while BeyBey is musical bubble gum. Again, as with the ’60s pop tunes I was encouraged to broadcast, the “past”-ness of the thing gives it a gravity that our current pop music doesn’t have—yet—even though the messages aren’t always that different from what we now consider to be major blasts from the female canon.

So what if we worthified the Top 40 by considering its pop songs alongside thoughts and arguments from great women writers of the past? What if we made explicit connections between the music of Kelly Clarkson and the oeuvre of Charlotte Brontë? What if we could talk about the contrasts between Adele and Emily Dickinson?

It’s amazing how something gains credibility once you view it through a historical lens. And so, I cordially welcome you to my guest blog for the next eight weeks, RetroPop, a series that will propose parallels between Elizabeth Gaskell, Ella Fitzgerald, and Ellie Goulding; a series that will lift up the tunes bumpin’ on your radio to the same level as time-honored female artists and ask, “Hey, what are these funky ladies saying in common?”

The posts won’t be definitive, exhaustive examinations of the gender politics of the pop tune. In fact, some times they might be quite modest nuggets of music and thought. But I like to consider them an opening parry in a dialogue about current pop music as part of a larger historical and artistic conversation about women. I hope you’ll join in this fun but thoughtful excuse to jack up the speakers during your coffee break… and to muse a bit while you slurp those last latte dregs.

So put on your dancing shoes and join me in the thinking-lady’s dance party. Somebody flip on the disco ball already!

I am so incredibly excited about this series it's a great idea. It's so odd to think about how so much of what is seen as part of a more elitist culture was the pop culture of it's day; Shakespeare- all dick jokes, Dickens- with weekly instalments he was practically soap opera and music follows a similar pattern. I think part of it is simple nostalgia and audience ageing- what was scandalous or ground-breaking to our grandparents becomes part of the institution by the time we start to from our own opinions

"50-something sexual revolutionary Madonna is trouncing around in a sexy high school band uniform giving nip-slips, "

How is Madonna being at all revolutionary by bringing her sexuality back to an adolescent ideal?

Must be the almost-16-year-old daughter ... Madonna is obviously living vicariously through her, and the seemingly eternal youthfulness, that is part of her public persona today, is indeed problematic.

As someone who would like to see more age-appropriate activities occur in our culture, I am very interested in this series. Looking forward to more posts!

While bringing her sexuality back to an adolescent ideal as a 50-something is impressive (not many 50-somethings I know could pull it off as well!), I mostly meant to refer back to her history as a sexual revolutionary (Truth or Dare, etc.) and highlight how her current band uniforms and nip-slips sort of stand out/contrast with her past, more progressive, thoughtful, sexual expressions. But I'm happy to hear other interpretations/opinions, so thanks for your thoughts!

i think comparing "low culture" pop music from different eras would best suit your argument that age adds gravity somehow to pop culture. i wouldn't necessarily compare any of these music artists to any of these authors you suggest (or their messages) because the medium is very different - even if austen's work was considered "low," it is still not the same thing as a beyonce song.

i get that what you're doing is comparing the messages though - but something to keep in mind is that while a feminist or non-conformist idea showing up in a novel from another time was considered revolutionary or scandalous...for beyonce to say that "girls run this mutha"....erm, not so much. or lady gaga to sing about being an individual...huh...ok? yes, we know. it's kinda played out. of course the "masses" may still need to be exposed to these messages, and pop culture could benefit from having messages like these around (rather than more damaging ones) it is very much not the same thing as pioneering authors who broke the mold for what a woman was supposed to be in that time period. pop artists (oh, sorry, their management and creative "machines") today are just recreating the same mold...over and over and over again.

basically what i'm saying is that the comparison for everyone and everything you mentioned should stop at "hey, in their day, they were considered 'low culture' too." but i'm interested to see what you do with this.

Thanks for your thoughts on this. I hear what you're saying about the more appropriate parallels between pop music of different eras and I will indeed try to work that in from time to time, but the goal of this blog (for me and, I hope, the readers) is just to have some fun mashing up creative female products from this era and celebrated ones of eras past, even if they're not 1:1 matches. I see what you mean about pop music and novels/poems/etc not being the same thing entirely, and thus sort of awkward to compare, but that's what I'm doing here with RetroPop, so I hope there'll be something in the flow of this content for you to have fun with. In fact, making connections between things that aren't clear matches is one of the most fun aspects for me. My point isn't to present super academic and completely bulletproof arguments-- that's not my strength or my scene. The point is to get our groove on and have a conversation about what women are saying through pop music as part of a larger historical conversation about women's messages in art. Thanks again for your comments and I'll keep them in mind as I keep on rockin' the blogs. (By the way, I was already planning to work some Zelda Fitzgerald goodies into future posts, so you'll have to keep an eye out for those!) 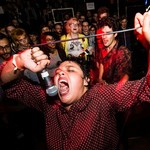 by Emma May
From Bratmobile to Bleached, this is the quintessential playlist for any angry girl gang.