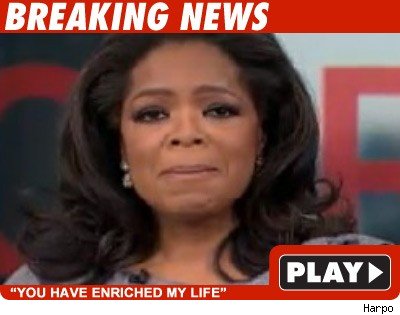 Hi, I'm Jen.  I write creative non-fiction stories and pop culture commentary in various anthologies, magazines and websites.  And I'll be covering Oprah's farewell here over the next several weeks in this guest blog series, which I'm calling "The Long Goodbye."  Before starting this blog, I was an infrequent Oprah Show viewer. I'd record an episode here and there and watch clips of people—famous and not—share their stories with Oprah like no one else was watching. Yet even though I chose the passive route when it came to Ms. Winfrey, she was still…present. And she was never more present than when she announced her final season late last year, to the dismay of many of her fans. (It's OK, "Oprah's Favorite Things" audience members: Life will go on.)

So, drawn in by the "Oprahcolypse" chatter I decided to start watching…actively. Here are some preliminary observations, which we'll be looking at more closely throughout this series:

Oprah is America's therapist. If you get booked on Oprah, you better be prepared to spill. An example: Reading from her memoir on November 1, Portia de Rossi said "it's not the weight gain from the 6 oz. of yogurt that worries me. It's the loss of self control. It crosses my mind to vocalize my thoughts of self loathing because speaking the thoughts would have to burn more calories than just thinking the thoughts and so I say: 'You are nothing. You're average. You're an ordinary average fat piece of shit. You have no self control. You're a stupid, fat, disgusting dyke. You ugly stupid bitch.' As I reached the bathroom and wiped away the last of my tears, I'm alarmed by the silence. The voice has stopped. When it's quiet in my head like this, that's when the voice doesn't need to tell me how pathetic I am. I know it in the deepest part of me. When it's quiet like this, that's when I truly hate myself."

Oprah is a narcissist. Sometimes it's endearing, like in a recent episode where she and BFF Gayle King traveled to Yosemite at the request of Ranger Shelton Johnson in an effort to attract African Americans to our nation's parks. "Two black people on the way!" Oprah shouted. Shelton greeted them when they arrived, and Oprah couldn't help but comment on his lack of excitement. "Listen, I don't think you have to genuflect when you see Oprah, but he's acting like he just saw us yesterday at dinner!" exclaimed Gayle. "He didn't seem to be that surprised actually," Oprah agreed.

This narcissism is fueled by those around her: Nearly every guest heaps on concentrated praise. On the October 27 episode, Jane Fonda tells Oprah she inspired her to write her memoirs. "Me?" Oprah exclaims in mock surprise. Yet the conversation that emerged rang true.

Oprah: You consider the second act to be age 30-59: the building act, where you produce.

Jane: And you're building, and creating…it's hard for women, particularly in this culture, to own themselves and know who they are and feel whole. It takes time...not to be impatient when you're in your second act. The second act is the hardest.

Then they begin talking about Jane's parents, which leads to the topic of narcissism. Oprah opens a dictionary to the word and points to a picture of herself. Then she shifts gears and asks how many audience members had coming to The Oprah Show on their bucket list. I swear, more than half the audience raised their hands or clapped. At least she said thank you.

Oprah is not really saying goodbye. She is documenting her last season as a reality series to air on the Oprah Winfrey Network, or OWN, which launches on 1.1.11 and promises to be "a 24/7 cable network devoted to self-discovery, to connecting you to your best self and to the world." We're on to you Oprah.

Oprah has power. As discussed in a recent New York Times article, Oprah is responsible for skyrocketing the profile of numerous books, personalities and products in the mainstream. I was surprised by the significant position "getting on Oprah" held in various business models. In fact, the aspiration to be touched by the "Oprah Effect," was so common amongst her life coaching clients, that one woman decided to write a how-to-guide. It won't be easy: the clock is ticking, competition is intensifying and many guest slots for the season are already filled. But it's like gambling…sometimes you win big.

In the coming weeks, I'll be producing a weekly round-up, exploring the media's take on Ms. Winfrey, and also looking back on some of Oprah's most significant moments. Where did I cull this list you ask? Why from Oprah herself…naturally!

Jen- I am SO EXCITED for this series! I've been gearing up for it for weeks. Can't wait to hear what you find in your watchings. Oprah is everywhere, and it will be a lively discussion once we start digging deeper into her empire and impact. So glad you're here!

Thanks Katie! It will be a lot of fun to do this, especially for BITCH! Loving all the other content on the site, too...

I'm a black female therefore people naturally think I love Oprah. I can't stand that woman! Oprah stopped being relevant and/or inspiring to me the moment she let out, " You told Harpo to beat me!"

I hate the way she interviews people because no matter what the topic, it's always about her and her issues. Yes, I realize that getting sexually assaulted by a family member can be devastating, but after hearing about in some form or another for the past 15 years of my life...God, I just want to tell her to stfu and let the other person speak for crying out loud!

That being said, she did make me realize as a young girl that I could go as far as I wanted to go.

Dae, that's hilarious. As a sidebar, I watched the Color Purple reunion show and just couldn't believe that viewers were subjected to Oprah and Whoopie going on, publicly, for several minutes about how one thought the other was mad at her. "I thought you were mad at me!" "No, Oprah, I thought you were mad a ME!" All it did was make me mad at my tv.

I see her magazine in the grocery store check-out line all the time, and it's always HER splashed across the front page. Not a guest, not an issue, just her. Naming the magazine after herself wasn't enough?

Despite her popularity, the egotism and narcissism has ALWAYS been a great turn-off to me, and I've never watched her show. I prefer to get my stories, critical thinking, great interviews, and debates from BitchMedia. It keeps me from NEEDING therapy.

I always think that when I see the magazine covers too. What's been interesting to watch is how the WHOLE machine feeds into that egotism...audience members, the guests (even super famous or accomplished ones), the producers and staff...all of them feed the monster. The narcissism is so rampant, yet with all that surrounds her and all she has accomplished is it possible to be anything but? I feel conflicted about it at this stage in my viewership.

you know what bugs me the most about this? the OWN network is taking over Discovery Health, which is my FAVORITE CHANNEL EVER, due to all the blood & guts surgery stuff and other medical stuff (which makes my partner vaguely queasy).
and it bums me out to think that all that gory medically goodness may be replaced by all oprah, all the time...
i hope they keep some of the original programming, i really do.

On the one hand, I love seeing an empowered and powerful black woman. On the other hand I'm tired of seeing her everywhere, having power over the media, writers, popular culture, etc, etc, etc. And how everything she touches seems to be about her. It seems she HAS to be everywhere, it's like a need - like she needs to be loved but I'm not sure she can love back. I must say, her giant monolith of a house in California annoys me to no end. One person needing, wanting all that space. Ugh!

I enjoyed reading this and look forward to more blog posts.

Wow, I love the insight and wit that you bring to this forum. Like you, I observe Oprah from afar and what I see is that Oprah is the product, so therefore she is always selling the product.
My wish for you in 2011, is for you to get on the Oprah show and have an indepth interview with her about how she separates (if she even does) Oprah the Product and Oprah the Person. Now, that would make a few headlines and I would be in the audience, saying.....that's my daughter in law!!!........you go girl!

I would say Oprah falls in the Histrionic category big rime!