Yashar Ali is the founder of The Current Conscience, which examines “politics and the personal, culture and relationship” from a progressive, feminist viewpoint. His writing has also been featured in the Wall Street Journal, TIME Magazine, the New York Observer, the Huffington Post, Jezebel, the New York Times, and the San Francisco Chronicle. His insights on gender and sexuality offer a powerful, honest perspective on how male privilege and false generalizations continue to simmer in the mainstream, tainting the personal and the professional.

Particularly after reading his post The Key to Success: Be a Man, I was curious to mine his thoughts on how beauty and body image standards apply to men today and whether modern “masculinity” has truly reached a crisis point in Western culture.

Bitch: What do you think about this notion of exploring beauty and body image standards for men? Is it a worthwhile conversation?

The media has been reporting a lot about men in “crisis,” and it has even slipped into fall sitcom plot lines. Do you agree that American manhood is somehow endangered, or could this possibly be a maturing point for contemporary gender relations?

The reaction that media and men generally (and frankly some women as well) have to feminism or a discussion about the struggles of women is incredibly defensive. It often ends up resulting in this idea that the positions and roles of men are being greatly diminished, and as a result, men are no longer masculine. It’s absurd.

I think the masculinity crisis is not about men being emasculated, as much as men saying and seeing their power as being diminished. If women get more college degrees, work more, speak up for themselves, basically if they have a chance at any form of equality, it’s an attack on men and their masculinity? That’s ridiculous.

How do you think male privilege informs the beauty/body standards for men? Does it lessen the pressure of those messages, compared to what women might experience? Or does it merely silence men from expressing resulting anxiety or concern?

I don’t think there’s a secret underworld where men have anxiety or concern about beauty/body standards, because, frankly, those standards don’t exist in any real way. On a personal level, having recently ended a seven-year career in politics, I am reminded of my own beauty/body standards. My face has rarely seen the business end of a razor in years and if a woman applied the grooming and beauty standards to her life, she would not have been as successful as I was. It’s just a fact. It’s a perfect example of how male privilege informs beauty stands.

As a non-white, non-straight male, how did you identify with/relate to/reject the Western heteronormative “masculine ideal” growing up?

Ali: I didn’t really come to terms or understand my sexuality (despite the fact I was born this way), until I was in my early 20’s. So, it’s hard to understand how that impacted my growing up. In terms of my ethnicity (Iranian), being different from my mostly white classmates when I was growing up gave me an independence that I am glad to have. I didn’t feel the need to conform in any way. I feel comfortable being who I am because when I walked into the classroom, I was already different in a way I couldn’t hide.

What can today’s men learn from feminism and apply to their own gendered identities?

More recommended reads from Yashar Ali at The Current Conscience:

He Doesn’t Deserve Your Validation: Putting the Fake Orgasm Out of Business

A Message to Women from a Man: You Are Not “Crazy”

I disagree that beauty standards for men are "virtually non-existent" but would suggest that they are just much more subtle than the standards for women. The ideal standard for men is all around us but just isn't pointed out as much. You go shopping for men's underwear and what body image do you see on the cover? You see the recent deodorant and body wash commercials where the guy ends up on the horse and asks the question, "Does your man look like me?" One of the unique aspects of being a gay male is the emphasis that is put on our physical appearance. Where do gay men even get that ideal standard from? For starters, they understand that to be perceived as having worth in our society that they should meet that ideal standard. However, any gay man will also point out that straight men feel much less pressure to achieve that standard, which demonstrates that the overall pressure for men is more subtle.

Sure, hard-to-achieve beauty standards for men may not be constantly flooding the media and banging guys over the head with some bone-headed, draining, perfectionist message like women's beauty standards tend to do. But come on! Saying that they are 'non-existent'? Really? That's stretching it a bit. Especially in this day and age--I swear, I hear almost as many men obsessing over diets and exercise routines and unshed pounds nearly as much as women do. It's practically an epidemic! And if that isn't because these men are after some BS physical ideal, then what is it? I tell you, no one escapes the beauty marketing machine in America--NO ONE! Not even men...

"Nonexistent" was either poor word choice or just simply an unfortunate analysis. "Less mainstream" and "subtle" are much more accurate. While I think it is wrong to hierarchize one thing over another, women, or rather MORE women face body image issues more than men. That is to say, less men probably experience these issues. Although that statement is beginning to become problematic...

The point is, there is a very clear stereotype and cultural image of the ideal male. Look at any advertisement, especially male cologne ads. But something very important is happening, is that the ideal man has, and still is, changing in a way to fit with the more recent image of the woman, a much more empowered and powerful woman, that emerged in the late 80s and early 90s. To fit the new woman, the new man has become more feminine in that he is more sensual, in touch with his emotions, passionate, and more focused on child-rearing (remember this is the "idealized man" portrayed in advertising). He is more "metro."

While men are still very clearly dominant in their roles both in society and in advertising, the image has shifted, in a way that, in my opinion, makes more apparent issues with male body image. That is, if you aren't 6'2" with washboard abs and a wide array of other bodily endowments, you are unworthy and thus not a man.

Male body image standards are virtually non-existent? On what planet?

Walk through the magazine aisle and look at the covers of magazines marketed for men. What do you see? I'll tell you what I see when I do this: Dozens of men with chiseled abs, unblemished faces, rippling biceps or tailored suits. Their hair is always perfect and occasionally they have a gorgeous woman on their arm. Men's health, GQ, Esquire... anything geared towards men will have these images on the covers and articles about what women want from their men (And it's very rarely anything that most men possess).

As someone else mentioned men can't go to the store without seeing rock hard abs on each and every single product on the shelves. Soap, underwear, T-Shirts, jeans... everything has a picture of some Adonis.

The only time you see a man on TV that doesn't look like he came out of a book on Greek Gods is when you watch comedies. All of the chubby guys, the overweight guys, the too thin guys are there. They make us laugh and that's all they're good for. You never see these guys in action films, romances or dramas (Well... there was one on Rescue Me. which was a dramady... and he was comic relief).

Stores tend to not sell clothes over 2 XL and when they do they cost an arm and a leg. Tall men get shafted too. And find me a fat guy or a real skinny guy that didn't grow up being made fun of because of their size. I've never heard a group of women sit around making fun of someone because of their size but you're guaranteed that if you are a fat man your friends will make fun of your weight on a regular basis.

This idea is interesting not just because of how delusional it is but because of how we are always being told that the female sex drive isn't driven by the physical or visual. That it's the mental that gets her motor running. Appearance is primarily to attract a mate and get laid. If the visual and physical aspects aren't as important to women as to men... then who exactly is supposed to set up this body image? Men are driven by the physical and visual so of course how a woman looks is going to matter to them. What do you want? Do you want science to try finding a way to change how the male or female brain was designed by nature to function?

Men have to deal with these image issues on a daily basis just like women. Men also have to deal with an entire industry of bloggers and activists that have deluded themselves into believing that these things don't exist and aren't an ever present part of our every day life. If you would kindly extract your head from your rear and dug yourself out of your pity party for five seconds you'd realize we're all in the same boat on things like this.

The alpha male 9-10s get the best jobs/opportunities and sleep with all the women (via post-sexual revolution polygamy)
Maybe you haven't noticed/figured this out, or you aren't part of mainstream society or something
srsly People like you coming out with this male-feminist white knight s*** make me wanna puke 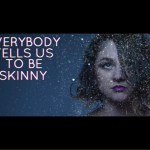 by Evette Dionne
Corina Corina is using music to offer an intimate look at eating-disorder recovery.