It Makes Sense that the Super Bowl Ended in a Fight. | Bitch Media

It Makes Sense that the Super Bowl Ended in a Fight.

With 20 seconds left in the NFL season last night, multiple players got into a brawl on the field. The last few seconds of the Super Bowl were a sadly fitting end to messy a season that began with NFL Commissioner Roger Goodell scrambling to react to the video of then-Ravens running back Ray Rice hitting his fiance.

That incident was quickly followed by Adrian Peterson being charged with child abuse and then other domestic violence cases including Ray McDonald, Greg Hardy, and Jonathan Dwyer. Goodell hired four women to help create and implement programs and policies around issues of violence against women, he visited the headquarters of the National Domestic Violence Hotline, and he spoke with representatives from the Black Women’s Roundtable Public Policy Network. This all culminated during the Super Bowl when the NFL aired a 30-second ad from No More, an anti-domestic-violence coalition. The ad, though, represents the overall failing of the NFL’s engagement with this issue thus far: it only asks people to listen, nothing more. Jane McManus has created a report card at ESPNW on the NFL’s work on domestic violence and Diane Moskovitz looked into what tangible in roads the NFL has made. Both found some progress but show that there’s a long way to go. All of that discussion about the NFL’s treatment of domestic violence was a grim backdrop to the Super Bowl. When the game ended with multiple players on both sides of the ball shoving and punching each other, it was a scene that brought to mind Melissa Harris-Perry’s commentary in August about NFL players who perpetuate violence off the field: “We prefer he is an abuser of other men on the field.”

The last-minute brawl will probably get little media attention because it was sandwiched between what is arguably the worst play called ever in Super Bowl history and the moment when the New England Patriots officially won yet another championship. The terrible play was made by Seattle. On a second down and goal with less than a yard to get into the endzone, 20 seconds left in the game, down by four, with one of the best running backs in the league on the line, Russell Wilson tried to pass the ball to Ricardo Lockette. It didn’t work out. Rookie cornerback Malcolm Butler read the pass, stepped into Lockette’s space, and intercepted the ball. Game over, except for the brawl and Tom Brady taking a final knee on the field. 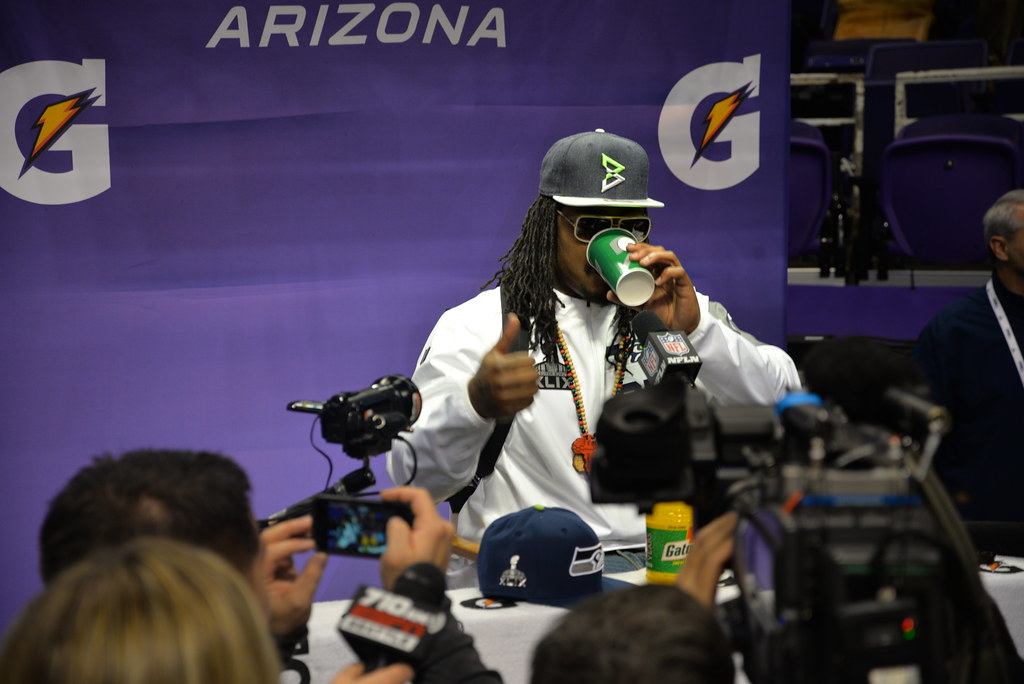 Many people (or, really, everybody in the world who was paying attention to the game) felt like Seattle should have handed it to their running back, Marshawn Lynch, who has the unique ability of being able to run through men and break unbreakable tackles. Lynch had his own storyline going into the game because he was his usual anti-media self this week throughout the circus that always precedes the Super Bowl. Facing a fine of $500,000 if he didn’t participate in talking to press, Lynch told reporters in one press conference that he would be answering all their questions with a single phrase. Lynch then answered all 29 questions with, “I’m just here so I won’t get fined.” In another press conference, after some preliminary words where he questioned why the media continues to hound him after he told them he has nothing to say, he said, “I talked. All of my requirements are fulfilled. For the next three minutes, I’ll just be looking at y’all the way that y’all looking at me.” As Sarah Jaffe wrote, Lynch’s statements to the press this week demonstrate that he, not Roger Goodell or anyone else, “controls the conditions of his labor.” Lynch’s press conferences represent yet another moment in this season where Goodell has desperately tried to control the message and the narrative of his league and found himself fundamentally challenged. If only Wilson would have handed Lynch that ball and let him run over some Patriots and into the endzone. Then sportswriter Dave Zirin’s dream of Goodell having to hand Lynch the MVP trophy after the game might have come true.

But now that we’ve talked about the sports, it’s time to consider the most-scrutinized part of the Super Bowl: the commercials. You can see all the ads from the game here.

Many of the ads were specifically aimed at dads. There was so much dad-vertising this year, Melissa Harris-Perry discussed the motivations behind this wave of advertising on her show yesterday. She and her guests posited that while the ads appear to be geared toward men, they might, in fact, still be focused on the heartstrings of women, the main consumers in the home. Nissan’s #withdad ad is all about a dad who is off racing cars and his wife and son watch from afar. “Cat’s in the Cradle” provides the soundtrack as we watch the son grow up. The overall feel of the commercial is best summed up by Nerdy Wonka, who wrote on Twitter last night, “So the mom does all the work of raising the kid but the kid wants to be like dad? NISSAN: For the absentee father inside you.” Toyota ran their own dad ad that included lines like, “Being a dad is a choice to get hurt, rather than to hurt.” Perhaps Toyota didn’t know about the backdrop of domestic violence to this game? Dove also had their own “Dads Care” commercial, showing lots of shots of dads interacting with their kids at all ages and in many different moments in life.

Nationwide had to release a statement immediately following the game about its emotionally manipulative and painfully sad spot that showed a young boy who says, “I’ll never learn to ride a bike, or get cooties. I’ll never learn to fly or travel the world with my best friend. And I won’t ever get married. I couldn’t grow up because I died from an accident.” Nationwide said the point of the commercial was “to start a conversation, not sell insurance.” Certainly there were a fair number of people watching the game tonight who have actually experienced the tragedy of losing a child and what the cost is to those families who could not have seen this commercial coming.

Coca-Cola’s commercial came with a built-in hashtag: #MakeItHappy. Their spot is about all the mean, angry, hurtful things people say to one another on the internet. But then someone accidentally spills coke onto a server and it spreads happy vibes across the internet that changes arguments into laughs, bullying messages into encouraging ones, and ends with the message, “The world is what we make it.” Coca-Cola’s messaging has that Jonathan-Chait-like argument behind it: If you are nicer online, then other people will be nicer to you. I’m sure Coke was sending that message to the trolls of the internet and not to the people who react to the trolls with understandable anger. 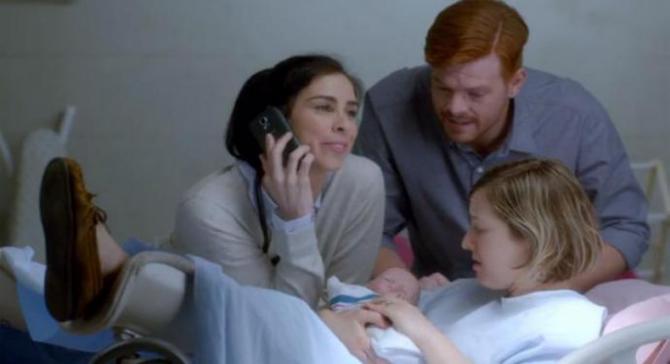 Sarah Silverman got in some good misandry during her T-Mobile ad, when she handed new parents their baby and said, “Sorry, it’s a boy.” Jeep ran a commercial that featured the song “This Land Is Your Land” with shots of its vehicles around the world and a wide, diverse group of people (though there is irony in this spot, too). Multiple commercials featured people with disabilities but, as Jess Banks noted, none of them speak. Dodge ran a spot that featured the faces and words of wisdom from centenarians, including one Dorothy Titleman (born in 1914) who had better advice for people on the internet than Coca-cola offered: “Keep your eyes open and sometimes your mouth shut.”

Microsoft had one of the best of the night with a commercial that featured Estella Pyfrom and her Brilliant Bus. “I had an idea,” Estelle says, “A bus that brings technology to kids who need it most.” At one point, she stands with a microphone in her hand and does a call and answer with the students she helps: “When I look in the mirror, what do I see? A brilliant mind looking back at me.”

Finally, there is the #LikeAGirl ad from Always. It starts with older women, men, and boys showing what they think “run like a girl,” “fight like a girl,” and “throw like a girl” mean. The flounce, flop their wrists, pretend to lightly slap the air, and barely move their arms through the throwing motion. Then they show a bunch of girls and they ask them the to act out those same things and instead of the normal, weak stereotypes we expect, we see the girls just, well, run, fight, and throw. The words on the screen say, “A girl’s confidence plummets during puberty but it doesn’t have to.” At the end, the woman off screen asks a young girl, “What does it mean to you when I say, ‘run like a girl’?” The girl says, “It means, run as fast as you can.” Damn right it does. The ads shows another failure of sports campaigns, though: as Shireen Ahmed tweeted, “#LikeAGirl ad does not feature *any* young girls of colour.” The girl-power advertising certainly got some people riled up: There were a whole bunch of people who saw the ad and the outpouring of support for it online and started their own #LikeABoy hashtag. Sigh.

In the end, I think we can say the only true winner of Super Bowl XLIX was Missy Elliott.

Jessica Luther is a writer and journalist currently under contract to write a book on college football and sexual assault. This article was edited Monday afternoon to add the tweet about the #LikeaGirl campaign.

A lot of chatter on twitter concerning "#likeaboy" was mocking it

by Amy Lam
Sarah and Amy are still undecided between Hillary and the Bern. What about you?