It's my momoversary! | Bitch Media

Normally I get hives when I see a mom-word like momtrepreneur, but I've been using momoversary for a few years now. What does it mean? It means today is the day I became a mom. It's a way to acknowledge that my daughter's birthday isn't just about her, it's also about me. Yeah, I'm selfish like that. Honestly it came about because one of my best friends said something a few years before I became a mom that we should give our moms presents on our birthdays, not the other way around. She's not only crafty, but whip smart too.

So now that I have a ton more mom friends, I tell them "Happy Momoversary" on their kid's birthdays. I do try to aim for the eldest, but hey, each kid is a new anniversary of motherhood.

Six years ago today I waddled into my midwife's office to see that I was at 8 centimeters at 9 am. I labored all that at home, in the car and at the in-laws. Yeah me!! They told me to go get a snack because I wouldn't be able to eat for quite some time and then head up to labor & delivery. My husband & I went to the snack shop and I got a bowl of oatmeal. I called said best friend and said, "The baby will be here soon!" Five hours later I was still at 8 centimeters! My daughter had essentially decided to go BACK into my womb by turning. Oh, yes, that will be the line I throw at her when she gives me smack. "You know what you did to me?" My midwife wanted to go in for a c-section, but my OB/GYN said to give me more time and suggested an epidural.

Oh hell, my plans for a nice natural birth were shot. And I hate needles! After crying for a few minutes, my husband helped me see that the epidural would help. And honestly, as much as I still hate that I had it, it did. It knocked me out and allowed me to get some much needed rest. Althou I do feel like a whimp too. *shrug* 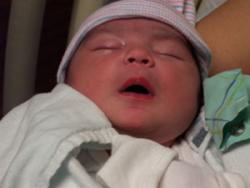 But after 18 hours of pushing, crying, pain and not being able to feel my legs (downside to epidural) I had my beautiful daughter. Six years...wow. It went by in a flash. I look at her picture here and think, she use to fit in the crook of my arm, now her long legs kick me in bed. I can't scoop her out of the car when she falls asleep, now I have to wake her up so she can at least get out.

For years my husband & I would fantasize about our future kids. We especially talked about having "the perfect girl." She's be athletic like us, love to read, be girly, but not so much that she wouldn't love climbing up trees and so on. And our daughter just about fits that description. It makes me wonder and believe in a higher power. The goddess sent me a girl that fits us, but also challenges us on a daily basis.

So later today I'll welcome a handful of other 3-6-year-olds into our home for birthday goodness. She'll be the princess of the Wonder Woman ball (Diana was a princess!) and fun will be had. Later on we'll move the party south to a Chicago Sky game, where her birthday will be announced for her hammy self.

I also bid farewell to this guest blogging gig as my time is up. Keep reading me over at Viva la Feminista and all the other places I contribute to. Psst...I do have another guest blog gig lined up already too. At the very least, we'll keep meeting here at Bitch blogs. I'm the mom to a 6-year-old whose favorite song is "Love Story" and sucks up pop culture like a sponge. I'll certainly be leaning on the Bitch community to help view all of this thru a feminist lens!

Thanks to Bitch for letting me hang here for a few months. Thanks to all the commenters, even if you took issue with what I said, love the feedback.

I too have gotten in the habit of wishing women a happy birthing day. Happy birthday to the child, sure, but happy birthing day to women. Doesn't quite work for adoptive mothers, though. Happy Momoversary for the adoption/birth/arrival date in that case?

Thanks all! And yes, I think momoversary covers all in beginning this journey of motherhood. Birthing, adopting, etc. 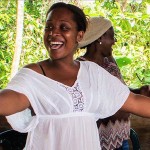