I've Been Loving You For What Is Probably An Appropriate Amount of Time: Farewell to She Pop | Bitch Media

I've Been Loving You For What Is Probably An Appropriate Amount of Time: Farewell to She Pop

Well, here we go: it is the end of my time at Bitch. And the end, sadly enough, of She Pop. That happened really fast, you guys! I kind of felt like we were just learning how to talk to each other! But it has been a good ride, I would think. And I hope it has been so for you as well. There has been a lot of shouting, some excitement; all in all, everything you want from a show.

On this day - my last! Sorrow and woe is me - I feel compelled to look back on the beginnings of this blog. And to re-read my very first post! It included immortal passages such as the following:

Pop stars, finessed and manufactured though they may be, are
reflective of wider cultural attitudes. They have to be: that’s how
they get to be popular in the first place. If they weren’t speaking to
people, no-one would listen. And the way that we talk about them is
often extremely revealing… If we feminists refuse to take pop spectacle seriously, if we
dismiss it as too shallow and silly to merit consideration, we’re
missing out on everything it has to teach us.

Reader, if there is one thing I have learned, by writing this blog and paying attention to the conversations surrounding it, it is that “we feminists” definitely DO NOT have trouble taking pop spectacle seriously. People have been more passionate and engaged and polarized and intense about this topic than I had ever imagined possible. Which is kind of bizarre! Before I started writing this blog, I considered myself more or less well-versed in what was going on, pop-wise; however, I had also always maintained a bit of a skeptical distance from it. Pop stars, to me, were really more like products being shilled to me than anything else. And while I could look critically at those products, the idea of loving them - or even hating them - was foreign to me. It would be like idolizing your toaster, forming strong opinions about the variety of toasters on the market, and looking down upon your neighbors for their inferior toaster choices.

In retrospect, I see that this position was just plain silly. These people are products, true; and they’re offering us a product that is purely, blatantly, cynically market-driven a lot of the time. “Authenticity” doesn’t enter into our conversations about them, because authenticity was never the point; in fact, if I’ve learned anything about this subject, by living with it for the past few weeks, it’s that I personally prefer blatant, obvious inauthenticity to the pretense of integrity. At least the shiny, synthetic, plastic appeal of the blatantly fake is better than the unearned self-righteousness of people who are dominating the market by “keeping it real” in the most radio-friendly manner possible. I’d rather hang out with Katy Perry than Bono, I guess, is what I am saying. But despite the fact that a lot of this stuff is market-tested and faked and blatantly calculated to appeal to us, sometimes it just works. And that’s when passion enters the picture. Pop stars may very well resemble toasters in certain respects, but although your toaster probably has a lot of marvelous qualities, it can’t effectively sum up your feelings about your most recent breakup; if it could, you might well have a lot of people ready to passionately defend their toasters against all who would criticize them.

Pop music gets under our guard, enters our consciousness, takes hold of our affections, often without any inspection by an inner critic, simply because it’s not meant to be taken seriously. It’s dumb fun. It’s silly. It’s often girly - and since “girly” means “frivolous” and “unworthy of consideration,” we somehow don’t see the need to think about it too closely. Many of us don’t even realize how strong our feelings about it are, until those feelings are challenged. That’s certainly been true for me, in my conversations with the commenters here. And that’s why I’ve loved this blog: people have been having hugely passionate, invested, feminst conversations about stuff that often escapes serious feminist critique. The moment when someone brings up Luce Irigaray in your Lady Gaga Halloween costume thread is the moment when you realize you’re a part of something amazing.

And, of course, there are moments when critique is useless. When something just works because it works. I’ve been watching this clip from “Gimme Shelter,” of a performance by Tina and (yes) Ike Turner, and I can’t even begin to unpack everything that’s present in these few minutes of film. There’s a pure, raw, true, blatant sexuality there that not many performers have ever been able to convey on stage. There’s also immense, unavoidable pain - which, in light of what we know now about Ike and Tina, is even more devastating than it must have been at the time. This is a song about an abusive relationship and a song about getting off; it’s a song about redemption and a song about degradation; it’s a song about power and a song about powerlessness; I can’t even tell you what it is, because it is also always something else. But I can show it to you! And it comes with Bonus Sexist Mick Jagger Reaction!

Good point, Mick! It is nice to have a chick! Occasionally! And with that, I leave you.

Dammit Sady you get me hooked and then you withdraw the supply.

Sady, I am sad to see you leaving. It's been a real pleasure reading your posts. I can't remember the last time I had such fun (and, as you point out, felt such passion!) commenting on a blog. While I was already a fan of Bitch, I felt a real excitement coming to the site everyday, waiting to see what you would be blogging about. Hell, it's just great to be able to talk about pop music in an arena where the insights go deeper than, "She's a ho. But I'd hit it." Thank you for that, and more. You will be missed.

Sady, I really enjoyed your articles, and looked forward to reading them. The Taylor Swift was so spot-on, took the words right out of my mouth, and then some. I don't always agree with you, but i always do enjoy reading your opinions anyway.
Like this article for instance, very true, for sure
But, i have to say, I'd still MUCH rather hang out with Bono than Katy Perry.
Not that it actually matters, because I'll probably never see either of them in my lifetime anyway.
And now i just am thinking that Bono is my toaster, and that I criticize people for their Perry Toasters, but really, I don't intimately know my Bono toaster, any better then I know a Perry toaster, so I shouldn't make these assumptions anyway.
But, it's BONO.
....Anyway, pathetic celebrity idolizing aside, i truly will miss your posts, you were (well, are) a clever, humouristic person with unbiased views of celebrity favourism, or any favourism for that matter, which gave you an advantage in writing about them, from an unattatched perspective.
Good luck in future pursuits

Very sad to see you go. I visited the Bitch blog much more frequently since you started writing here. I will miss your articles immensely!

I didn't know Tina had a song about abusive relationships though. Seems I was looking for one of those about a week ago.

Welllll... I don't know that this song is ABOUT about abusive relationships? It's just the performance, and the weight of sadness behind "I've been loving you too long (pause) and I don't want to stop now," which to me feels like a confession of being trapped within an abusive dynamic as much as it feels like the crazy sexfest it's about to turn into. Also, "What's Love Got To Do With It," which (again) is not ABOUT about abusive relationships, but resonates that way given what we know. ANYWAY.

Must you go? You have no idea how much I will miss She Pop. I should start visiting tigerbeatdown regularly to get my fix.
I hate to post a comment that adds nothing to the discussion, but...there is nothing to say except that you are brilliant, and I am one more person who appreciated what you brought to this site. 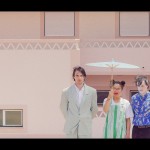