“Jane the Virgin” Has a Surprisingly Progressive Take on Sex 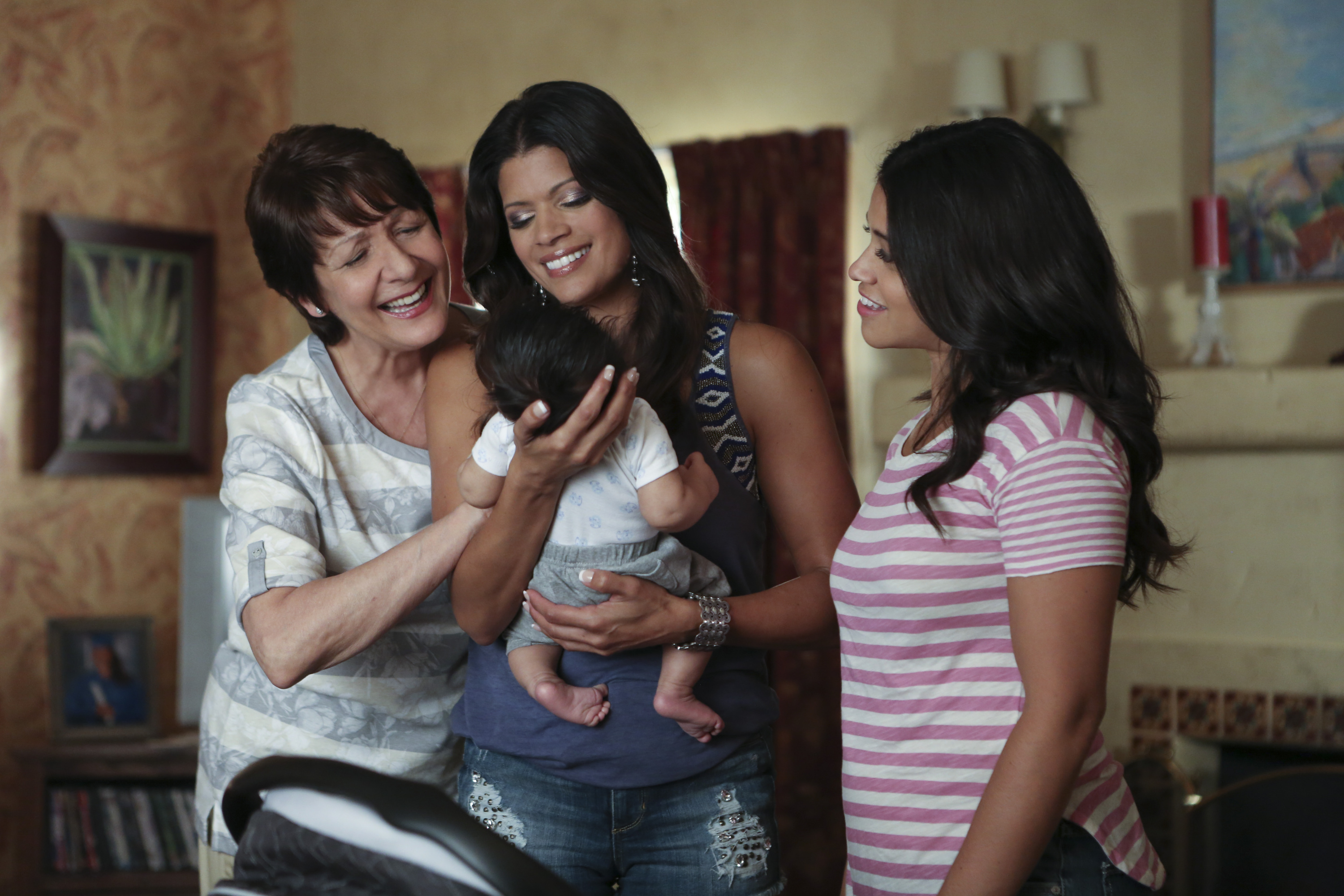 Ivonne Coll as Alba (left), Andrea Navedo as Xiomara, and Gina Rodriguez as Jane in Jane the Virgin (The CW)

Imagine if you got pregnant without ever having sex. That is the pretense of the new—surprisingly good—CW show Jane the Virgin.

In the first episode of the show, young Miami waitress Jane Villanueva (Gina Rodriguez), who decided at a young age to not have sex until marriage, is accidently artificially inseminated by her gynecologist. Jane, as well as her family and friends, are shocked to find out that she’s pregnant, but what’s more surprising is that Jane has a romantic history with the sperm donor, Rafael Solano (Justin Baldoni), a mysterious entrepreneur with a dark past.

Sound a bit convoluted? The far-fetched plot is a loose adaptation of Juana la Virgen, a hit Venezuelan telenovela. While it is often assumed that the telenovela is just a Latin American soap opera, the genres are not entirely similar. As Brenda Salinas pointed out in a piece for NPR’s Code Switch, telenovelas are miniseries with a clear ending in sight, unlike soaps that can go on for decades. Telenovelas also capture a larger audience: Neilson estimates that there are 5.6 million telenovela viewers in the United States, compared to 2.9 million who watch soap operas. So far, Jane the Virgin has proven to be both a commercial and critical success and was picked up for a full season after only two episodes. A lot of the show’s success is due to its all-star Latina cast, which includes Orange is the New Black actress Diane Guerrero and character actress Ivonne Coll as Jane’s grandmother Alba, in addition to strong newcomer Gina Rodriguez as the leading character.

A show called Jane the Virgin obviously has a complicated relationship with sex. Jane’s decision to stay a virgin was a personal one, if not somewhat influenced by her conservative abuela. That grandmother, who is Catholic, tells Jane that she can never go back once she lost her virginity. But after Jane winds up accidentally pregnant, grandma Alba still advises Jane that she should get an abortion if she feels that is the right choice. The fact that the show devoted an entire episode to the topic of abortion is significant—most TV shows and movies immediately eliminate abortion as an option for dealing with an accidentally pregnancy (see: Juno, The Secret Life of the American Teenager, and Knocked Up) or don’t discuss it at all. Alba’s openness is also momentous, especially considering her two loves in life are God and Jane, in that order. Sure, Alba almost kicks Jane out when she finds out she is considering having premarital sex with her soon-to-be-ex-boyfriend Michael Cordero (Brett Dier). But she still accepts that Jane can do what she wants with her body, a lesson that many U.S. congressmen should take note of. It is this meeting of the traditional and the modern values that make Jane the Virgin palatable to both devoted lovers of telenovelas and casual TV watchers.

While every character on the show views virginity differently, from Jane’s conservative grandmother to her more liberal mother, for Jane, it is something that should be kept sacred. Sure, Jane falls into the norm of viewing virginity as a social construct, an objective line that she shouldn’t cross until marriage, but not having vaginal sex is a choice that Jane makes for herself. She doesn’t judge other characters who have premarital sex and understands the ramifications of her decision, not only for herself, but also her romantic partners. 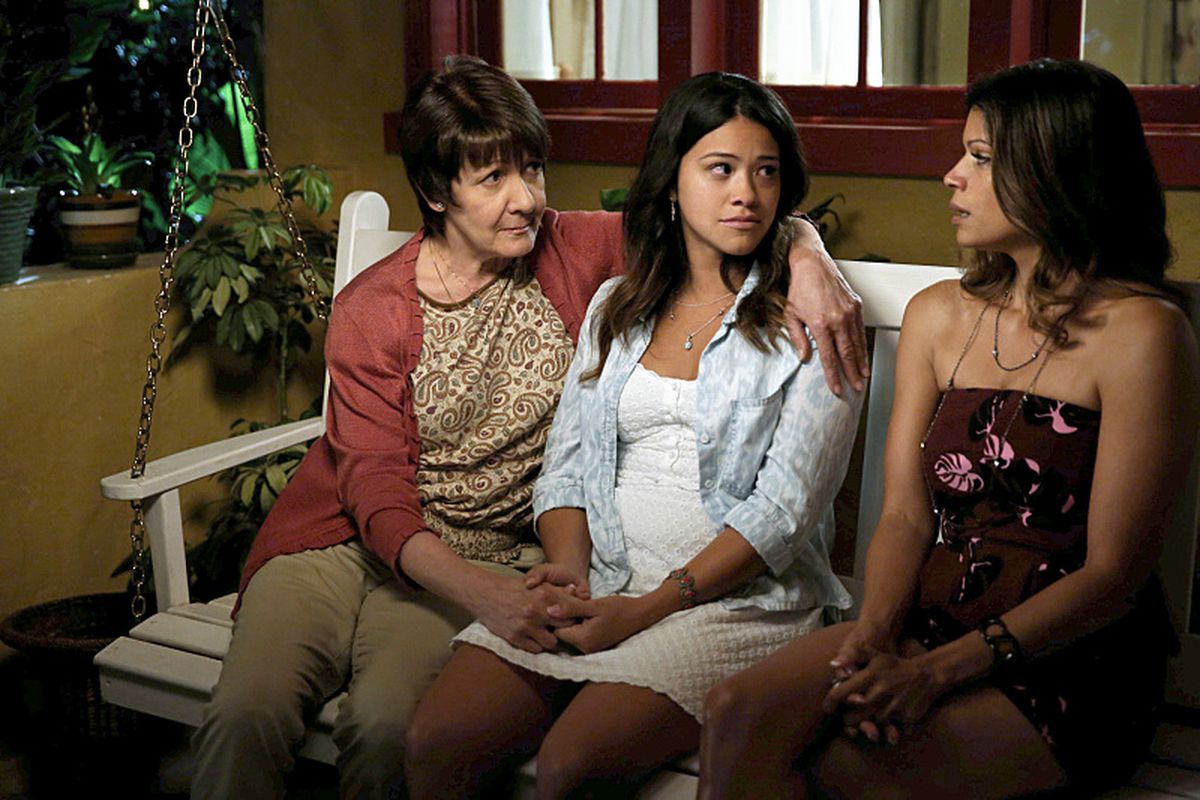 Ivonne Coll as Alba Villanueva (left), Gina Rodriguez as Jane, and Andrea Navedo as Xiomara in Jane the Virgin (The CW)

Some plot points around sexuality do make me frustrated. When Jane becomes pregnant, it plays into Americans’ real-life fears of gynecologists, acting on patients without their consent, for example. Significantly, Jane is the only virgin of all the show’s characters and is also the only character who does not have a deep secret or is concealing a dark past. While lying, murders, and not-so-clean criminal records are all par for the course on telenovelas, Jane seems to be the only innocent character on the show. Jane’s only secret? She is studying to be a teacher, but she really wants to be a writer. Jane does not go through life with rose-colored glasses and definitely does not consider herself an inmaculada.

But there is still the question of what will happen when the show is no longer Jane the Virgin. Jane has skipped the step of intercourse and gone straight to motherhood, but she is not content to stay a virgin forever. The first episode of the show starts with Jane getting it on with her boyfriend, but she stops right before having sex. Jane seems ready to lose her virginity, but only within the sanctuary of marriage. Through engagements, break-ups, and fights, the one constant for Jane is her virgin status. It is something that she can hold on to and control. It is also a way for the show to keep Jane at a higher moral standing than the other characters.

It is easy to see the comparison between Jane and her mother, Xiomara Villanueva (Andrea Navedo). Xiomara is a single mother and had Jane at a young age. Jane’s grandmother uses Xiomara as a cautionary case of premarital sex, but that’s just the abuela’s opinion: mostly, the show portrays Xiomara as a confident parent. One of the first plot twists in the show is that it turns out Jane’s father, Rogelio de la Vega (a telenovela star played by Jaime Camil) was unaware that Jane existed. While Xiomara hesitates on introducing Jane to Rogelio, their inevitable meeting proves to be less than life changing. Jane quickly sees that Rogelio really isn’t all that different from his telenovela character, “El Presidente.” While Jane had always wanted a father, she realizes she doesn’t need a father figure for her life to be more fulfilling. She’ll get by fine with just her mom and abuela, thank you.

Despite the prestige the show places on virginity, Jane the Virgin should deserve a spot on your TV schedule, not only for its binge worthiness, but also for the strides it’s making. The show follows in the footsteps of other shows with Latina characters who embrace their heritage while also striving to be independent, career-focused woman, like America Ferrera in Ugly Betty. The show isn’t perfect, but it’s forging a path for Latina characters that go beyond the maid or saucy mistress. Despite being a show on an American station, Jane the Virgin isn’t afraid to have Spanish dialogue beyond the exclamatory “Dios Mío.” While shows like Modern Family feature Latino characters, there needs to be more shows like Jane the Virgin in which the show is lead by a predominately Latina cast.

It’s also worth pointing out that Jane the Virgin has helped give the CW its most-watched Monday in almost three years. If that isn’t proof that TV shows that actually center on female stories are commercially viable, I don’t know what is.

Relevant: The Most Realistic Women on TV Are in a Wacky Accidental Pregnancy Comedy 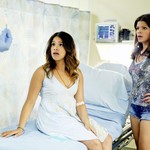 by Gabrielle Moss
“Jane the Virgin” resonates with viewers because Jane’s hopes, dreams, and worries are given real weight.