Janet Mock Talks About the Power of Pop Culture 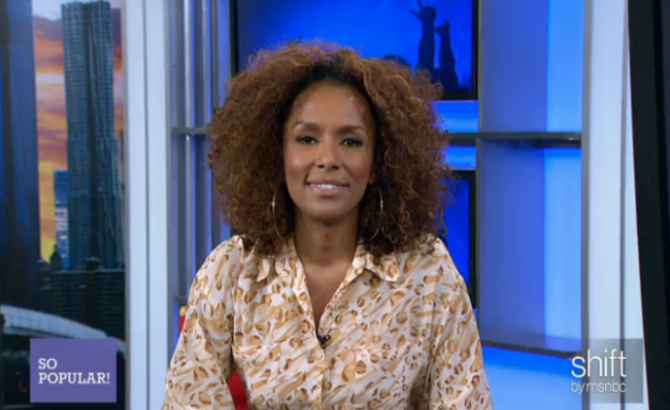 “What did I learn from being ‘the subject?’ I learned to show up prepared,” says Janet Mock. On her new pop culture show, So Popular!, Janet Mock has come prepared.

Last year, Mock’s bestselling memoir, Redefining Realness, catapulted her into national consciousness, making her one of the most recognizable trans women of color ever. Mainstream media didn’t always seem prepared for her or her ability to clap back at ignorance, as evidenced by her now infamous two-part exchange with former CNN host Piers Morgan. When speaking to Cosmo recently about her new show on msnbc.com’s online channel shift, Mock said one of the biggest things she learned in 2014 was that she didn’t ever want to be the subject again. “For me, it was like, ‘This is not what I was meant to do, to answer your questions,’” she said.

Now, Mock is the one asking the questions‑and she’s as charming and insightful as we knew she’d be. In Redefining Realness, we learned of the author’s deep love of pop culture; she gave equal weight to Beyoncé and bell hooks as Black women who shaped her life and ideology. Mock’s unofficial tagline for So Popular! is “We take a deep look at the things you pretend you’re too smart to like.” Essentially, the aim of the show is to have deeper conversations about culture that’s usually dismissed as fluff, taking a feminist and social justice lens to a series like The Real Housewives, for example.

Mock is finding her stride a few episodes in and already we’re seeing endless examples of why her voice is so needed. On her inaugural show, Mock asked comedian Sherri Shepherd what it’s like to raise a Black son as people like Mike Brown, Eric Garner, and Tamir Rice are killed by police officers. We’ve since been introduced to Mock’s rotating “Smart Ass Pop Culture Feminist Clique,” with Mock leading a discussion about the defense of accused serial rapist Bill Cosby by Phylicia Rashad, another Black woman who shaped the host’s consciousness.

Mock’s long-term goal is to make her guests feel safe enough to make themselves vulnerable on the show and to engage in a real way, beyond silly sound bites and canned answers. Here, Mock talks to us about the pop culture moments that shaped her, why people are reluctant to give pop culture deeper thought, and her desire to amplify brilliant young voices she’s encountered on social media. 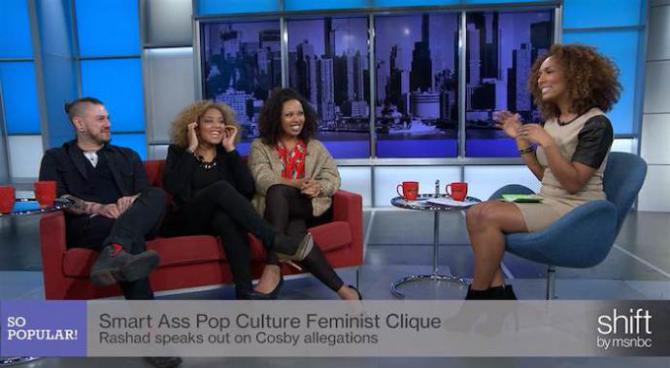 TINA VASQUEZ: In your memoir and in our last Bitch interview, you discussed how pop culture has been a crucial part of your life. What are some pop culture moments that shaped you?

JANET MOCK: The first one blazing in my mind is Clair Huxtable. There are layers to the work Phylicia Rashad has done and I don’t want to detract from that, but that character on The Cosby Show was so important for black women. It was the first time I saw a woman of color speak up and out and not just play background to a man. She gave me hope that I would have that kind of power, and I will never not look at GIFs on Tumblr or watch the clip of her take down of Elvin when I see it.

The 1990’s in general were like a pop culture renaissance for black people. In television, we had shows like Martin, Family Matters, and Living Single. There was also the pop boom and like everyone else, I watched MTV’s TRL to hear about what was happening and what everyone was talking about. Seeing Destiny’s Child was a pivotal moment for me. I remember feeling like, “Oh my god, my life has changed.” I was a young girl in Hawaii and there weren’t a lot of people who looked like me. There were many people of color, but no celebratory black spaces, and we were all subjected to this very colonized idea of beauty. So, seeing Beyoncé… I basically wanted to be Beyoncé.

It seems So Popular! couldn’t have come at a better time. So much of the culture we consume is created by black people, but rarely do black people get to lead discussions on culture. The New York Times recently laid off the only black reporter writing for its Culture section. Are you hopeful shows like yours are a sign of a shift?

I certainly hope so. So Popular! doesn’t fill that particular void, but the reason I pitched the show is because I felt something like this was needed. We see witty responses to pop culture all the time, but nothing that really dissects or discusses how we can be smart people who love “shallow” things. You don’t have to disengage yourself. When I’m speaking on college campuses or in academic spaces, I’m not expected to bring up Beyoncé or Carrie Bradshaw. Why is that? We’re expected to splinter our approach to our interests, but on Tumblr you see how people break down the content they engage with every day in very smart ways. I can love Barbara Smith and bell hooks and I can reach into my mind and apply what I’ve learned from them when ingesting and interacting with popular culture. What’s exciting about So Popular! is we’ve seen these kinds of critiques in print, but rarely in a visual space like a show. I’m excited to have a show where we analyze and take a critical stance on culture that’s considered lowbrow.

Why do you think people are so dismissive of pop culture or reluctant to give it deeper thought?

It’s very much about class or socioeconomic status in our culture. Like I said, pop culture is seen as lowbrow. So, we have culture considered lowbrow and culture considered highbrow. Highbrow culture is what the rich have access to. Who’s going to the opera, who has season tickets to the ballet? High culture has been deemed worthy of analysis. I didn’t have access to those things. I had a single parent who put me in front of a TV. I didn’t have access to literature until the 7th grade. For a lot of us, pop culture is our culture. As we get older, we’re taught to be embarrassed of our love for pop culture. We enjoy it in secret, which is why we’ll refer to it as a “guilty pleasure” because certain people with more access think it’s “basic.”

Now I’m a writer with more access to different kinds of culture. I read books–and I watch Wendy Williams. It is the reading I’ve done that has helped me understand how she can be problematic. I’ll always remember something Andy Cohen said about being at dinner parties with different kinds of people who have little in common, but if The Real Housewives is mentioned, everyone has something to say about it. It’s like a shared, common thread. We all watch it and we can discuss it. The way I see it is: pop culture is just the start of the conversation.

I’ve been thinking a lot about how millennials engage with pop culture and as a result, how they get a bad rap. We see so many articles in which the generation is dismissed as narcissists or as apathetic. But you’re a millennial and so many of the people leading the movement that came out of Ferguson are millennials. Specifically, they are young Black women. I think so much genius is coming from millennial women of color. So, why do you think millennials are being painted as careless?

For me, the definitive millennial moment in 2014 that really defined our generation was Beyoncé standing in front of the word “feminist” at the MTV Video Music Awards. I can go so deep in that moment. It meant so much, represented so much—and a lot of people didn’t get it. So, you have to take into consideration who’s writing these articles about millennials. I’m not trying to be ageist, but they’re older people who are like, “They’re always on their phones!” They don’t seem to understand how we use social media as a tool. They have no real connection to social media, so they don’t get how it really keeps us connected. It’s our tool to organize, to find community. I can be engaged in or learn about multiple movements because of these tools. We’re very much a generation engaged in pop culture, but you’re diminishing who we are if you pretend we only care about the Kardashians. That is very far from the truth and on So Popular! I think we’re showing the complexity of who we are as a generation. The way we engage with pop culture is very unique. I can be a feminist and watch these shows and I will show you how I break these things down from different angles.

So Popular! is very much a millennial show, and by that I mean it’s a show about what matters to us. It’s not a guilty pleasure show. Like I’ve said before, it’s a deep take on the stuff we pretend we’re too smart to like. There’s already so much shame, you know? All of us carry so much shame, why be ashamed of the shit we watch on TV? Let’s have fun with it. Let’s engage with it. Let’s discuss it. Let’s be thought provoking, without being inaccessible and taking a deep dive into academia.

Let’s talk about social media a little more. I feel like you’ve always understood the power of Twitter, both in bringing people together through hashtags like #GirlsLikeUs and in recognizing the wonderful voices from different communities that can be found there. In particular, Twitter is the place where so many smart women of color are acting as cultural critics, minus a large media platform. Are there any voices from Twitter you want to amplify on your show?

In the proposal for the show, I included all of the voices I go to for news and so many were from Twitter. Each night, I have to put my phone on silent in the other room or I’ll be on Twitter all night. When I wake up, the first thing I do is grab coffee and check out Twitter. So yes, I get Twitter. People I follow inform me on a deep level. There’s a wealth of knowledge there that has taught me so much and I want to tap into that on the show for sure.

As a journalist, it’s important to me whose voices get heard and where they come from. I want to amplify voices from Twitter, but I’m also turning to other forms of media like podcasts and blogs. One of our first guests was Zeba Blay, who has the podcast Two Brown Girls that I’m obsessed with. I tuned in to her show for three years. When I asked her to come on, she was a little apprehensive and nervous, which I understand. People are going to be nervous and scared because this is a very different format than blogs and podcasts or Twitter, but like I told Zeba: I just want them to show up and be their brilliant selves. I want them to talk about what they know; what they’re experts on. Once you get the first appearance out of the way, it’ll get easier. I really want people to feel free to go in on the show. I’m not interested in people who already have huge platforms. I want to be very intentional about who I invite into this space. I want to give people opportunities who usually aren’t given opportunities in this space, and our audience will only benefit from hearing their voices. 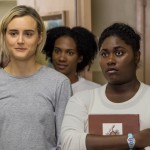