Jock Bitch: All Up in Your Grill | Bitch Media

Jock Bitch: All Up in Your Grill Well, it’s the Friday of Memorial Day weekend, a three-day span rife with beer, outdoor cooking, and the type of conversation that often occurs when large amounts of meat are burning on a grill: sports talk.Usually, sports talk involves a male-dominated roundtable that covers last night’s playoff game or the minutia of baseball stats.

Those subjects are all fine and dandy, but the past several weeks have provided plenty of outside-the-lines subjects to cover, subjects whose importance perhaps might bypass a typical sports fan. So, this weekend, we suggest you tell those dudes to go get you another PBR and shut their pieholes, because it’s your turn to talk about sports topics that are important to you.

1) Female Indy car driver Danica Patrick will battle it out at one of the most storied—although, at this point, stale—events in sports history, the Indy 500. Now, we talk about Patrick quite a bit here on Jock Bitch. That’s because she’s such an emblem of all things amazing and all things awful about women in sport. She is stunningly good Indy car driver, one of the best in the world, certainly the most successful female driver ever.She also is, quite frankly, super hot, and doesn’t fear using that to advance her profile. In fact, even those of you who don’t give a rat’s ass about sports probably have seen Patrick…clad in a bikini, draped across a car, in some magazine or other.So…what do we do with this? I mean, on the one hand, more power to Patrick for exhibiting such agency in controlling her own career, and making some bank in the process, and for not fearing her own power. On the other hand…bikinis? On a car hood? Really?

2) This one comes from the ol’ virtual mailbag, as several folks have written in about this month’s tryouts for the Lingerie Football League. The league began as an alternate Super Bowl halftime show that was aired on pay-per-view cable networks. The concept is pretty simple to grasp. The games are full-contact, and the players wear helmets, shoulder pads…and bikinis. Its first year, the league fielded four teams, and the 2009-2010 season features 10 teams. Ten freakin’ teams. That somehow 10 teams exist is disgusting, but perhaps even grosser is the bemused media coverage that accompanied the nationwide tryouts. Articles—accompanied by photos of scantily clad young women tackling each other or holding footballs in a suggestive manner—ran in many major news outlets, but none of them seemed to want to discuss the myriad of issues this brings up concerning sexism, feminism, and sports.

3) Finally, this might not have much to do with feminism and sports (except for the fact that I found out about it on the horribly piggish sports blog Deadspin), but recently the UConn and Florida baseball teams got sidelined by a 5-hour rain delay. So what’d they do to pass the time? They had a freakin’ DANCE OFF! Awesome. Follow the link to stupid Deadspin for the video: http://deadspin.com/5265981/all-big-east-baseball-games-now-decided-by-dance-off

So... Danica Patrick can be "super hot" and can sprawl across the hood of a car in a bikini, and you praise this (using her looks and sexuality to her advantage), but the women of the Lingerie Football League can't? Who says that the women of the LBL aren't "exhibiting such agency in controlling [their] own career['s], and making some bank in the process" and "not fearing [their] own power"? I've been generally disappointed in this blog since it began, but this is an all-time low.

She said, "On the other hand…bikinis? On a car hood? Really?" That's not praise. That's a question.

She doesn't DRIVE HER RACECAR while WEARING the bikini.

Not all derby is played in lingerie. In fact, the more athletically oriented the team, the more advanced the play - the less lingerie fans will see.

It also happens that often it means fewer tickets sold as well - but not always.

Admittedly, I still wear fishnets with my uniform dress. One thing that does is make the bruises look more like derby bruises and less like my spouse beats me with baseball bats. Fishnets do make the legs (and, trust me, skaters have beautifully muscular legs) look even better.

Just had to point out that the team in the video is South Florida, not Florida. Go Bulls! Not sure why the Deadspin writer felt the need to be so snarky about the dance off, there are plenty worse things for a bunch of bored college kids to get into and while they may not be the best dancers ever, they definitely look like they were having fun.

....but that was great. Maybe I just love musical theater a little too much, but I think there should definitely be more danceoffs in sporting events. Instead of, say, going into triple overtime in NBA games, decide the outcome with a danceoff. A hockey brawl? Instead of the penalty box, make the players dance it out. As macho a performance as dancing can sometimes be, there's no question that it would tamp down the testosterone just a little.

I for one have grown tired of Danica being both praised and bashed, its time that she be held accountable for the damage she causes by not thinking things out. What type of respect for young female athletes is she making by getting in a bikini and strutting her stuff for men? We've got to start holding these women accountable for their actions, and perhaps that starts by getting athletes like Danica to defend their choices with respect to the social damage being inflicted by their actions.

Roller Derby girls in my league wear tights under shorts and tank tops. They are completely covered. They don't skate in lingerie...can you imagine the rink rash you would get from that? They do dress up in Hot Topic type outfits (punk style..skulls and cross bones type stuff) because it's fun to play up that fierce alter-ego that as women we don't often get to do. We are always told to be quiet and nice and feminine. Roller Derby shows that you can be both feminine and fierce. I suppose the same thing could be said about the lingerie football league, but when I see them it seems like they are being made a mockery of. It's a male sport, and the moment women try to do it they have to wear bikinis to entertain the men. It feels much less empowering to me...it feels more like the women are the butt of some kind of joke. Roller Derby is a women's sport and always has been. It's not a half-time show that makes a joke of women's ability to play tough contact sports.

Exactly. Roller Derby is on the women's terms. Give the LFL players a say in their uniforms. If they WANT to be scantily clad...fine. Personally, I'd rather have pads. And, until there is a "not hot", 300 lb linebacker on one of the LFL teams, I declare sick exploitation. 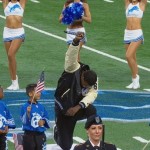 by Bitch HQ
U bum.