It’s your lucky day! Great, great Olympia indie music label K Records put together this special mixtape for Bitch, featuring a ton of new releases. The mix is a smattering of a little bit of everything from K, brought to a boil and slowly stirred.

Here’s the tracklist and a rundown from K about new music on the mixtape:

A few new releases of note: The Neo Boys (track one) were an all-female punk rock band in Portland, Ore. from 1978-1983, and we couldn’t be more excited to be issuing a 2xLP (co-released with Mississippi Records) & 2xCD collection called Sooner Or Later, including nearly everything they ever recorded, on October 15th; “I Wish For You” by LAKE is from their newest full-length, The World Is Real, out September 17th, and this one features Ashley Eriksson (see track 10!) on lead vocals; “Detective” comes from a single of the same name by Lovers Without Borders, individually known as Karl Blau (sax & vocals), Jessica Bonin (drums & vocals), and Alex Parrish (guitar); “Colours” is the titular track from Ashley Eriksson’s July LP, which is gorgeous, and Ashley is known to many as the composer of the closing theme to Cartoon Network’s popular show, Adventure Time; “Rosie” comes from Kendl Winter’s latest (and third full-length for K), It Can Be Done!, which came out on August 6th. Relevant: 9 Latinx Women Who are Taking Over Pop 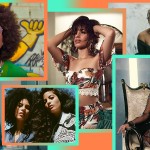 by Dahlia Balcazar
Check out these nine stars who are—and are going to continue—dominating the pop charts.