Kate Bornstein is Fascinating, but the New Documentary About Her Life Falls Flat | Bitch Media

Kate Bornstein is Fascinating, but the New Documentary About Her Life Falls Flat 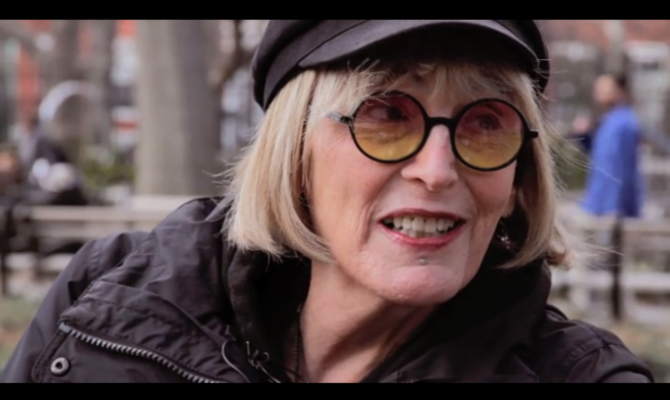 A still from the new documentary about Kate Bornstein, the author of numerous books including Gender Outlaw.

I set out to watch Kate Bornstein Is a Queer and Pleasant Danger with enthusiasm. After all, how could I not be excited to watch the story of “a self-described trans-dyke, reluctant-polyamorist, sadomasochist, and recovering Scientologist” who has been instrumental in raising the visibility of transgender folks?

However, the film does not illuminate her life and work in a serious way. Kate Bornstein’s writing has been an important part of many peoples’ lives, but I hadn’t actually read any of her books before seeing the film—I wanted to watch the documentary because I was excited to learn more about her. Promotional press for the film offered that Kate is a “role model for a generation of people that is learning how to define its gender and sexuality, and survive in a world that frequently greets them with hate and hostility” and an activist who helped pave the way to resisting transphobic narratives in popular media. I was looking forward to seeing how she does it all, but we only glimpse this part of her life. Instead, the documentary focuses on her interpersonal relationships, which are interesting but also not explored in great depth.

The film delivers just a sketch of Kate’s exuberant personality, portraying her as a revered and controversial figure. But the film doesn’t really do much in the way of showing us how this actually plays out. We follow her to a few speaking engagements and book readings, but we don’t really hear from fans other than through the tweets that are used as transition graphics between segments. It would have been really great to see an interview or two from people at these events saying why she was so important to them and why they had invited her. Even better yet would have been showing some clips or interviews with her media adversaries. The filmmakers expect viewers to be on Bornstein’s side throughout the film—but simply describing a conflict doesn’t paint as clear a portrait as showing it.

In an interview with After Ellen, filmmaker Sam Feder says that the lack of other community figures in the film was an intentional choice meant to keep the focus on Bornstein:

“It’s expected that ‘experts’ or community figures will talk about the subject of a film as proof of their significance. For transpeople this is particularly problematic because other people are constantly talking for us, explaining us, validating us. I want to disrupt that expectation and let the subject be the voice and guide of her portrait.

That being said, I am working on a longer version of the film that includes people who have been influenced by Kate and her work. This will serve to compliment Kate, give a greater context for the film, and project her legacy. That will be released in another year.”

I would recommend waiting to see Feder’s longer film. In this version, the film feels unfinished. Most of the film is spent following Kate around as she talks with friends, goes to speaking engagements, and is interviewed by the filmmakers in her home. It stays in the present and barely grazes past her youth, her transition, her college years, her family and children, her participation in Scientology, her activism, and her health, through a series of brief interview clips. The film skimmed the surface of each of these topics without going into enough depth to give the segments teeth. I found myself constantly wondering when they were going to show secondary materials like archival footage and photographs, but they were few and far between. Where were the images of her childhood? She and her partner over the years? It would have been great to see variety of scale in the storytelling. The film would have benefitted from backing out to give a larger sociopolitical context, and show us where she fits into it, before zooming in a little closer into Kate’s perspective. I was left with so many questions at the end of the film that I wanted to jump in and start asking Kate questions myself.

The interviews seem to be missing the kinds of follow-up questions that get into the real nitty gritty and that make great documentaries interesting. What was it like for her when she was transitioning? How did it affect her relationships? What is her writing process like? Why did she feel that theater was the best venue for expressing her activism in the earlier years? She knows Annie Sprinkle?? Having not known much about her before seeing the film, I tried to fill in my knowledge gaps, but there just seemed to be so much missing content and context.

There is also just some clunky filmmaking in the documentary, including a transition device of flashing tweets and quotes up in between segments. While some of these were interesting or funny, the pace shift felt really jarring. The quotes were on screen for such a short time I had a hard time reading them and for the most part I didn’t think they added much to the story.

I understand the difficulty of completing projects on independent film budgets, but I still think there was a lot more that could have been done with research and secondary materials. In my opinion, an audience should be able to gain enough understand of a documentary subject through the film itself, without having any prior knowledge. The film does successfully give a sense of Kate as a charismatic person but I wanted the film to go more in depth.

This is clearly a film for people who already know about the life and work of Kate Bornstein. For people who have read her autobiography and books such as Gender Outlaw, this film may help provide a larger picture of Bornstein’s fascinating life. As a Kate Bornstein newbie, maybe it’s good that the film left me with more questions than a solid sense of her contribution to the trans community, because it’s encouraging me to finally get around to reading her books. But even for people who know her work well, the film will likely feel like an extension of the trailer that doesn’t go into much more depth in 72 minutes than the teaser does in 90 seconds. It just wasn’t a thorough enough investigation into her life and work to do it justice or feel satisfying to me as a viewer. It’s hard to say that as much as I wanted to like this film, it just fell flat.

Kate Borstein is a Queer and Pleasant Danger is screening this weekend in Portland, Oregon as part of the Portland Queer Documentary Film Festival, the only festival in the U.S. devoted exclusively to LGBT documentaries. Bitch Media is a community partner in this film’s screening on May 17.

Erica Thomas is an artist, writer, filmmaker, project manager, and feminist (among other things) based in Portland, OR.