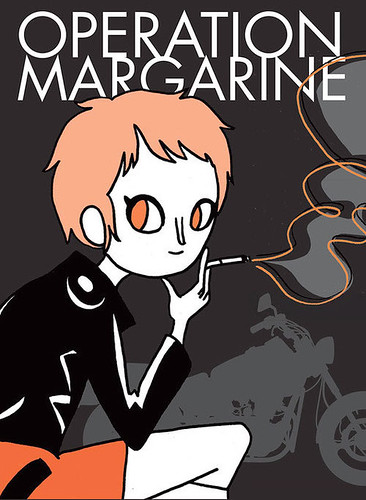 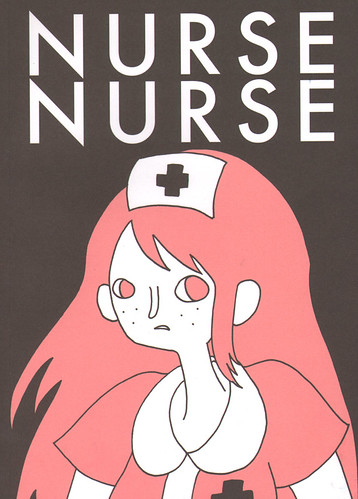 Katie Skelly makes beautiful comics. Her work is part of a wave of comics authors who are breaking the Marvel model, making what I often think of as auteur comics.

Auteur, French for author, is film term used to describe movies that express a director’s unique style. Auteur comics also benefit from this single directorial voice, expressing an author’s unique story, aesthetic, and experience.  Skelly’s comics feel like they’re wholly her own, combining her own designs, dialogue and illustrations into unique and compelling visuals.

Skelly’s new graphic novel, Operation Margarine (released in April by Adhouse Books), is a fun, high-energy story of rebellion and friendship between the wealthy, fresh-out-of-rehab Margarine and rough-around-the-edges, rebounding Bon-Bon. Skelly took some time to answer questions about her work, methods, and influences.

SUZETTE SMITH: In past interviews I have heard you rattle off lists of comics that you’ve read and studied, both obscure and classic. What brought you to such an extensive survey?

KATIE SKELLY: Hmm… probably just dissatisfaction with what was available to me. I got into manga because I felt a bit alienated by what was at my comic shop while I was a teenager. And then when I’d read as much manga as was available, I began getting interested in 60’s-70’s French, Belgian and Italian comics—which all held a lot of appeal to me because they were so sexy. I just really love comics. They’re such a weird language, and I’m obsessed with language.

When I first read your first graphic novel, Nurse Nurse, I was struck by the parts of it that, although they exist in a science fiction story, seem to be pulled directly from the life of a young professional woman. I loved the conflict with the main character, Gemma, and her medical school dropout, space pirate ex-boyfriend, Lucian.

A few people have asked me if he’s based on anyone. He’s not. I thought it would be good to add a more chaotic character. I wrote Gemma as a character that had sort of learned to function within an ordered system, and the tension in her story comes from that order dissolving.

In an interview you did on Boing Boing last year, you talked about watching Gatchaman as a kid and seeing Swan Jun eaten by a flower, unaware that there was a subsequent second part to the episode that would explain how she survived. There’s a real magic to a viewer having to accept that something strange has happened and that they might never get an explanation. That feeling exists often when watching foreign cinema and also when watching cult films.  Is that something you try to elicit in your own stories?

Yes, I’d like for my stories to seem sort of foreign or odd or otherworldly. I wanted the title Nurse Nurse to seem like it had been poorly translated from another language. I was really interested in failures of communication. Recreating that sensation I had as a kid was the main inspiration behind the ending of Nurse Nurse. I think you might be in the minority of people who liked that ending! If I were to go back and work on the story all over again I might restructure it so that made a little more sense, but it’s not really the hill I want to die on now.

The main character in Operation Margarine has an eating disorders—I found it fascinating that, although it isn’t portrayed in a positive light, it never comes to the forefront of the story.

I had just started getting help for my own eating disorder while I was working on Operation Margarine.  What I wanted to show was that these things don’t come up and swallow a character whole, like they might in, like, a Lifetime movie. The disorder is always with you, but the world also keeps on turning. You find a way to semi-function even though you’re living with this sickness. At least that was my experience. I was in a lot of pain at that time and that sort of helped me work through it. 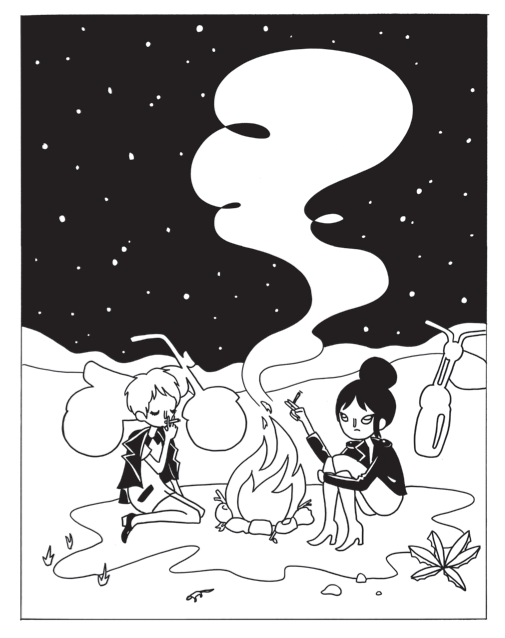 It’s also a biker gang buddy story about two unexpected female friends. Did the buddy genre feel like it was particularly important to you?

That’s interesting. Personally I don’t really see it as a “buddy” story, but I’m not sure what I’d call it at this point. I can tell you what it was influenced by: new wave films like Vivre sa Vie and Les Bonnes Femmes, the semi-exploitation film The Girl on the Motorcycle, and comics like The Book of Human Insects by Tezuka.

I watched a lecture you moderated Osama Tezuka on for the Japan Society. Do you consider him to be a major influence on your work?

I was brought on for that lecture to moderate from the perspective of a US cartoonist who’s been influenced by Tezuka. I love basically everything I’ve read from the Tezuka oeuvre, but I tend to remember and appreciate his more salacious comics.

Looking just at the visuals, there’s some elegant play with negative and positive space present between Margarine and Bon-Bon. Was this a clever design solution for a black and white comic or something more?

After doing a comic as dense as Nurse Nurse, I wanted to get back to basics.  Because I was doing simpler drawing, I had to pay more attention to how the characters were designed so they were distinguishable from each other. I like doing big, sort of vacant eyes, but because the character Billy was a bit less lost as a character I gave her one black pupil. She also kind of mirrors Lucian from Nurse Nurse’s one bad eye in that way.

I gathered that you were a fan of cult scifi films like Barberella  from Nurse Nurse and cult biker films like Faster Pussycat Kill Kill  from Operation Margarine. Is there a cult genre you’re thinking of attacking next?

I’m sort of toying with the idea of a Valley of the Dolls type story. That’s one of my favorite films, I watch it constantly. I also felt very inspired reading Kyoko Okazaki’s Helter Skelter; I loved the combination of body horror with the story of a fallen idol. I think I might be looking at something about fame and decay next.

If you’re in Toronto this weekend, check out Katie Skelly’s table at the Toronto Comics and Art Festival.

Suzette Smith is a writer and illustrator living in Portland, OR. Of all the social medias, her twitter is best: @suzettesmith.

Super excited that she'll be at TCAF, and turns out she's attending two panels I was already planning on attending! 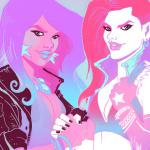 by Sarah Mirk
The new series is a bit like Tank Girl meets Cowboy Bebop, with a dash of Broad City.