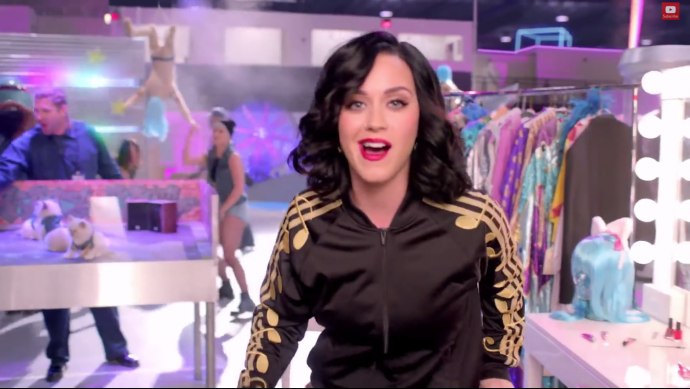 Katy Perry in an ad for her Super Bowl halftime performance.

Listen, I don’t expect much from Super Bowl halftime shows. It’s the National Football League after all—a male-dominated organization that has only recently paid lip service to women’s rights and domestic violence. Still, any time a female artist headlines, I can’t help but watch—I love to see a woman on the field doing something other than cheering for the male players.

This year’s show started off strong. Katy Perry came in singing her hit song “Roar” riding on the back of a lion. How often do you get to see that? I long for this type of pop-culture moment—when a woman gets to be bigger and more powerful than the sexy, subservient creature that dominant society allows for. She even intentionally changed some of the lyrics to show that she wasn’t lip-syncing—we were hearing her own voice, her own roar.

The moment of breaking down traditional gender roles was short lived and undercut, however, when Perry started singing “I Kissed a Girl.” The song, though it has its problems, could have been a nod to the queer community on the biggest platform television has to offer. Instead, the performance of “I Kissed a Girl” got morphed into a hetero fantasy as Lenny Kravitz joined Perry onstage for the song. 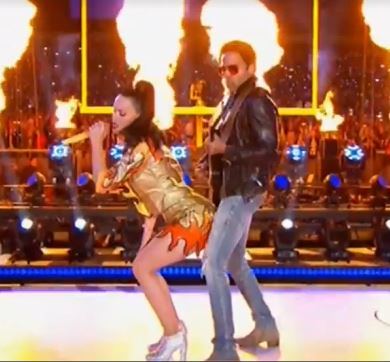 She immediately began a sex-kitten performance that involved rubbing up against Kravitz. At the end of the song, which felt like it lasted only about 30 seconds, she literally got down on her knees facing him while he stood over her playing the guitar not far from her face. The interaction undercut the lyrics of the song, which address a woman’s exploration of her sexuality with another woman. It also undermined her power on stage as a female solo artist since she ended up in a subservient position to a male (the fact that a woman gets to “choose” to be a “goddess on her knees” aside). The performance reiterated the heteronormative message that sexuality should only exist between a male and female, or, if two women do “experiment” with each other, it’s only to satisfy the male gaze. Perry has never been a consistent LGBT ally—though her song “Firework” raised money for the It Gets Better Project, she infuriated many people with her 2008 song “UR So Gay,” a rant about her boyfriend “acting gay.”

Aside from the gender play, the race politics of the performance were problematic as well. Missy Elliott also guest starred. As Maegan La Mala Ortiz commented on Facebook after the show, “So all the black artists are special guests of Katy Perry? Hmm.” And Amadi tweeted, “White privilege: when Missy Elliott and Lenny Kravitz have to be special guests of a woman who gleefully sings with foam sharks.”

Related Reading: Who’s to Say What Makes a Gay Anthem?

Stephanie Abraham is a frequent contributor to Bitch and can be found online at stephanieabraham.com. This piece was originally published on FeministintheSuburbs.com.

Images in this article are screengrabs from NBC’s broadcast.

This is an interesting perspective. I guess people are open to taking on different views and perspectives. It's interesting because when Katy Perry was doing the whole headbanging hair twirl thing. I took it more as being punk rock for a second and letting Lenny have the spot light. I think she did that for Missy Elliott , not the hand twirling feeling the vibes of the guitar but let Missy have the spotlight. It was more collaboration then submissive. My interpretation was that she was like hey look it's Lenny a pop sex symbol and then was like look it's Missy a rap goddess doing her thing.

I would view the appearances by Lenny Kravitz and Missy Elliot as favors to Katy Perry. With respect to them, Perry is still up-and-coming. They are legendary and didn't "have to" do anything. And as for the sharks. Someone can be both talented and silly. They don't cancel each other out.

The dig was when she copied Taylor’s head banging and hair whipping during the duet with Lenny Kravitz. The camera cut away from her multiple times but anyone that watched Taylor perform can see it…

Would you have preferred that Katy have brought white guests to perform instead? Something tells me you would have an issue with the "racial politics" of that performance as well. She was booked as the headliner, she didn't have to do anything but instead chose to bring those two artists on stage with her.

Whether her status as a headlining act is due to her white privilege is at least debatable, but her making the independent choice to bring incorporate those two African-American artists as her guest stars is not in any way indicative of some systemic racism at play; it was her personal choice alone. Nuances are important, and understanding racial politics is a key prerequisite of being able to accurately call them out.

<p>No matter how heteronormative the reiteration, Katy Perry's song, I kissed A Girl is banned form the airwaves in Singapore. Singapore is a so called robust democracy and an economic miracle where homosexuality is illegal. https://twitter.com/Amandajeyanam</p>

Relevant: The Forgotten History of Female Athletes Who Organized Their Own Olympics 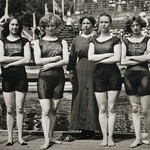 by Jules Boykoff
Men barred “those delightful creatures” from competing at the Olympics. So female athletes protested by making their own games in 1922.