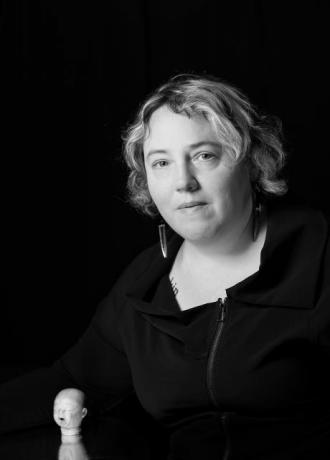 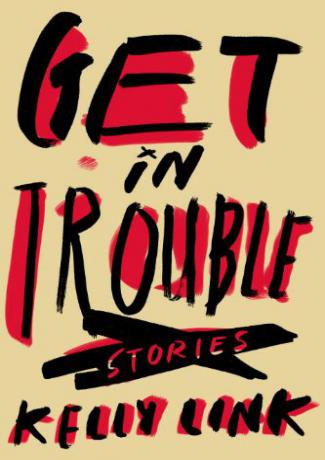 Imagine you were a teenage girl in a world of heroes who have petty superpowers, where fairies were real and somewhat abusive, where the rich kids built themselves pyramids and partied on the moon. In such a reality, how would you handle the challenges of adolescence? The young female characters in Kelly Link’s imaginative new short story collection, Get in Trouble, face all of these conundrums. Each story is its own kind of pocket universe—including “Light,” where actual pocket universes are prevalent. Yet, rather than liberate the girls, the rules of these realities pose their own set of challenges that the teens take on while they struggle to define themselves within the boundaries of family and friendship.

Take Immy, for example. In “The New Boyfriend,” adolescent Immy’s envies her friend’s collection of “Boyfriend” dolls that come in Twilight-ish themes of werewolf, vampire, and ghost and can dance, talk, and profess love for their owners. Immy longs for the obsessive, all-consuming love and validation she cannot achieve through interaction with actual boys. Instead, the fantasy boyfriend is a simpler, more attentive version of human boys. The fact that the doll is “ghost” flavored and possesses a “spectral” operation mode only highlights his allure as a symbol of the unattainable. The story demonstrates Link’s keen insight into adolescent relationships where the line between friend and frenemy is blurred by jealousy rooted in insecurity and unfulfilled desire, leading her character to commit morally ambiguous acts.

Link is a writer known for her young adult fiction—Get in Trouble is her fifth collection of short fiction, but her first collection for adult readers in 10 years. She’s won plenty of praise for her work: Michael Chabon has called her “the most darkly playful voice in American fiction,” a well-earned title. Get in Trouble speaks to her close understanding of the adolescent experience. She mines the ambiguity of those years: the porous boundaries between childhood and adulthood, where transformative change is a frightening and ever-present reality. In these stories, horrifying humiliation and rejection are just as possible for the characters as the ability to levitate.

Link writes earnestly, her prose straightforward, never winking at the reader about her own clever imagination. There’s a clear parallel between her work and that of masterful contemporary writers like Karen Russell and Aimee Bender, who also weave fairytale elements into their stories with fantastic result. What sets Link apart is her resistance to the confines of genre. Despite our genre-obsessed literary culture, her stories keep readers guessing. Link recently said in an interview with Electric Literature, “I think that we want to be led slightly astray when we’re being told a story. Just a little wrong footed. Even if it’s only by the way that the sentences have been put together.” To this end, the stories in Get in Trouble are told through a mix of fantasy and magical-realism, with a touch of sci-fi. Each story emerges from an invented world the reader catches a glimpse of through these pages — and cannot stop looking. Link told Gigantic Magazine in 2013 that she loves stories that incorporate fantastic elements without shame — a fitting description of her own work.

In “The Summer People,” one of the collection’s strongest stories, moral ambiguity and female friendship also take center stage as a girl named Fran grudgingly befriends Ophelia, the Lexus-driving new girl in their Appalachian town. Ophelia is taken with the rural tourist town, telling Fran, “It’s just so beautiful. It’s like another world, you know?” But Fran doesn’t know. “Never been anywhere else,” she replies. The town that tourists pass through for a few summer days is a bucolic year-round prison for Fran, who’s stuck with an avidly religious alcoholic father who absents himself from the story early on, ditching his daughter for a prayer meeting in Miami.

Slowly, with great mastery over the reveal, the story lets us in on Fran’s secret. She is not just limited by familial circumstance, but by an obligation to a particular house, occupied by what she calls the summer people, for whom Fran is a permanent servant. The summer people’s presence is fluid. They come and go, sometimes disappearing for years at a time, demonstrating that transition is possible for everyone and everything in this world—except Fran.

Related Reading: New YA Book Great is a Gender-Swapped Retelling of The Great Gatsby.

Lindsay Merbaum is a fiction writer and essayist based in San Francisco.