by Michaela A. Nowell 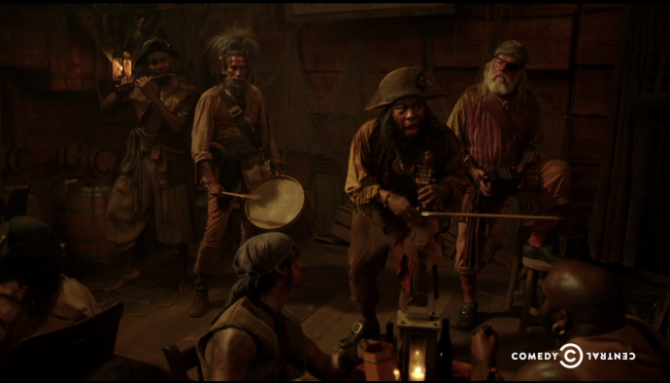 Key and Peele have been favorites of mine for a while now. While not all their jokes go over with me, their Comedy Central sketch show hits social commentary homeruns like nobody’s business. In shape-shifting outfits, the duo tackles race, gender, sexuality and much more. One of my favorite skits—so good I had to Instagram part of it—is where two men (who we later find are women in disguise) give a lecture to college men on sex and vaginas. It includes the declaration, “Vaginas deserve respect!” To see so much overt feminism in mainstream comedy lately is endearing.

This week, the show had another brilliant moment with a feminist sea shanty sketch.

Dressed as pirates (“of the Caribbean” style), Key and Peele lead a shanty that is the reverse of what you'd expect from a bunch of old timey pirates.  There is so much going on in this sketch that my feminist sociologist mind is in a frenzy. The song, at minimum, addresses the following topics:

If nothing else, it’s impressive they crammed all those ideas into a sea shanty. Watch it here:

The pirate context of the song was not only funny, but comedically clever. They chose pirates to sing a pro-feminist song, which is important because pirates are generally understood as grimy, hyper-masculine, hyper-violent criminals with no morals. However, these pirates are singing a whole song promoting the moral treatment of women. Instead of chasing “wenches” around—as the pirates did at the Disneyland Pirates of the Caribbean ride did for decades—they demand respect for women’s sexuality. The contrast is funny and the reframing of masculinity is significant. Gender scholar Michael Kimmel is known for promoting a reframing of masculinity so that it is pro-feminist—he believes that, at least in part, we need to address inequality by equating masculinity with respect for women. Key and Peele do that here very successfully.

The first verse follows a narrative that we’d assume was going to joke about sexual assault. But midway through the rhyme, the salty pirate flips the script:

I once met a lass so fine

She was drunk on barleywine

I had been at sea

A month or three

And knew I could make her mine.

The lass was past consent

So off with her we went

We threw her in bed

And rested her head

And left—because that’s what gentlemen do.

A woman has a right to a drink or two!

Without worrying about what you will do!

Because “ho” is disrespectful, yo.

The use of pregnant pauses in the song is great, as it keeps you thinking that at some point someone’s going to object to their feminist diatribe—but instead the room cheers each verse. Despite the fact that they “don’t say bitch and they don’t say ho,” the song doesn’t come off as slut shaming. When in the second verse Key says he heard of a woman who was good on her knees, he in no way devalues her—her sexual proclivities/abilities are framed as neutral.

There are a couple things in the shanty I would change. Even with all this feminism, it’s hard to avoid misogynistic tropes. For instance, the reference to a male heir or the fact that all but one of the pirates is male. Honestly, while they are denouncing the words, there is a lot of joy taken in saying (we don’t say) bitch and (we don’t say) ho. The words themselves are part of what makes it funny. Also, I wish the narrative would have de-centered white feminism by choosing a non-white pirate captain. How good would Gabby Sidibe have been in that role? What about Sophia Vergara? Lucy Liu? In addition, the line “woman so fair” is unfortunate, as it reinforces beauty as white.

Still, this is a song that feels good to sign along to. Key and Peele and their show’s writers are great for coming up with this bit of brilliance, but it’s centuries of the feminist fight that have made such a thing possible.

by Michaela A. Nowell
View profile »