Positive images of transgender women in American culture have been few and far between. Television shows like RuPaul’s Drag Race and films like TransAmerica have increased visibility of the MTF community over the years, but there is still a lot of progress to be made, and one person who stands to help change that is Brooklyn, New York native Ceyenne Doroshow. Growing up transgender, cooking became her way of escaping the sometimes confusing and harsh realities of her life. Inspired to write her own book after a prison conviction, Doroshow is ready to share her wisdom—and her delicious recipes—with the world.

Funded by a successful Kickstarter campaign and released this October by sex-worker advocacy group the Red Umbrella Project (read more about them in Bitch’s upcoming Habit(at) issue!), Cooking in Heels: A Memoir Cookbook is a compilation of more than 50 Southern-inspired dishes with a Caribbean twist, many of them bearing the names of family and friends—Papa Frank’s Ting Ting Fiery Red Snapper, for instance, and Ty’s Pig Pot. I sat down with Doroshow to discuss food, the book-making process, and being a transgender woman in America.

Growing up, what did cooking mean to you?

I started cooking rather early. My mom was going to college and working and my dad was working full-time and pretty much left me and my brother with a babysitter. I was a quick study in the kitchen and had a taste for food from the ages of, I’d say, seven or eight. By nine or ten I was cooking full-on meals: heating up food, making food for me and my brother, making dinner for my parents by the time they came home. My mom and father got to see that I could be trusted cooking, that I was finding stuff to use. It saved my mother time, which saved us, in the long run, from having to have a babysitter. Anytime my mom left the house I was free to cook, and most of the time I would run upstairs and get her heels and [then] turn on the music and run around the kitchen.

Why this book? Why now?

When I was locked up a couple of years ago, I was put in contact with the Urban Justice Center [and had] an awesome lawyer who handled my case well. But I still wound up serving 28 days. One of my cellmates, whom I knew of but never involved myself with when I wasn’t a prisoner, tried to calm me down [by] talking about food. He said, “You know what you should do, you should write. You should make a cookbook.” I knew his uncle and used to cook for him, that’s how I connected who he was. His uncle and I were really close. I started writing the meals down and Urban Justice put me in contact with the Red Umbrella Project, where I met the fabulous Audacia Ray. Over the past two years, this whole idea became a baby which Audacia and I have cradled to good health. And now we have Cooking in Heels. It’s not as easy as saying, “I would like to have a book.” But it has generated a lot of good publicity in the trans community.

What was the process for deciding which recipes should go into the book?

I’ve written so many recipes. Whatever I really, really liked or that was quick and easy to make made the cut. I don’t want people to have to cook all day. You should be able to come home and have the meals and everything prepared. I wanted dishes that were not hard to make in a crunch.

When you were younger, were there any positive portrayals of transgender people in the media?

There were no representations, really, when I was growing up. As far as a mentor or someone to look up to, as a child, no. The only known performer or person in the transgender community that I can pinpoint was Sylvester.

What’s been the reception to Cooking in Heels so far?

This has been a good, educational project. People [who] have never thought about transgender issues [before] are inquiring and learning about us now. A lot of people have seen what we’re doing and are now asking if we’re going to do a cooking show.

What advice would you like to give to today’s transgender youth?

Young transgender children are coming out at very young ages and they need to take every precaution and meet the right people and stay in school. Get involved in your young community and find a safe haven to learn and educate yourself. Not only about being trans, but about life, period.

To purchase Cooking in Heels or to learn more about the Red Umbrella Project, click here. 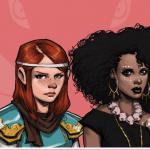