This post originally ran on the Bitch blogs in October 2010, but we’re reposting it with a few edits in remembrance of Kitty Wells, who passed away this morning at age 92. I have a confession to make: Though I’m a huge fan of classic country music, especially the ladies of classic country music (I’ve mentioned that I went as Loretta Lynn last Halloween, haven’t I?), until recently I had almost no knowledge of Kitty Wells. Except for the odd track on a mixtape, I didn’t know much about her music or history. Where have I been?

Wells was recently featured as one of NPR’s 50 Great Voices series, and it isn’t hard to hear why. As one of the authors of the book Finding Her Voice: Women in Country Music, Robert Oermann (who wrote the book along with Mary Bufwack) had to say, “What I love about Kitty’s voice is the sort of pent-up intensity in it. It’s like she’s very private and very intense, but at the same time very penetrating.”

Wells was a hit-maker in country music during the ’50s, a time when most women weren’t exactly topping the charts. The song she is best known for, “It Wasn’t God Who Made Honky-Tonk Angels,” was written in response to a popular song by Hank Thompson. Thompson wanted to blame his fidelity problems on the honky tonk cuties that God put in his way, but Wells set the record straight. Um, it’s not God who’s to blame for your cheatin’ heart, buddy—it’s you. Score one for the “Queen of Country Music”!

At 92, Wells was the oldest living member of the Country Music Hall of Fame. She and her husband Johnny Wright, who celebrated their 70th wedding anniversary in 2007 (congratulations!), had eight grandchildren, 12 great-grandchildren, and three great-great grandchildren.

She recorded top-ten singles into her sixties, and from what I can gather (I’m a new fan, remember) she’s never shied away from singing about issues like sexism and ageism. Check out this song, “A Woman Half My Age”:

Kitty Wells was an amazing vocalist who paved the way for women in country music for more than seven decades. She’ll be missed, but she leaves a tremendous legacy behind.

LOVE kitty wells. thanks for the post, kelsey! classic country is rife with fabulous, uber-talented women, but kitty was one who took her position and popularity and used it to ruffle the system-feathers. UGH i could listen to her all day. 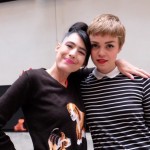