Tagged under the headline “The New American Job,” the New York Times trotted out a story last week that gave me a headache with the title: “More Men Enter Fields Dominated by Women.” In this alarmingly annoying piece of journalism we meet Miguel Alquicira, an intrepid 21-year-old male dental assistant meant to represent legions of young men who have:

come of age in a world of inverted expectations, where women far outpace men in earning degrees and tend to hold jobs that have turned out to be, by and large, more stable, more difficult to outsource, and more likely to grow. ‘The way I look at it,’ Mr. Alquicira explained, without a hint of awareness that he was turning the tables on a time-honored feminist creed, ‘is that anything, basically, that a woman can do, a guy can do.’

If I had some pearls, I would have been clutching them in my teeth. What in the world? The economy is so bad that men who used to be able to work with their hands are finding honor in the lowly positions of women?

Apparently it has been this dire for at least a decade. The New York Times analysis showed that occupations that are traditionally more than 70 percent female accounted for a third of all job growth for men between 2000 to 2010.

So, Mr. Alquicira is fresh out of school. I won’t attack the messenger. But really, does Equal Opportunity Employment now extend to white college-educated men? For 20 years, these desperate men who wanted to do women’s work were foreign-born non-English speakers with low education levels. Now even white, college-educated men want to be nurses and schoolteachers. Times must be so hard.

Not shocked yet? Even though their jobs are harder than they expected, they make more money—even in female-dominated work—and they move up easily to supervisory positions in what is sweetly referred to as the glass escalator. (Naturally, the first thing I thought about was Loki in the Avengers.)

So, the other thing? These formerly-held-by-women-now-held-by-men jobs are referred to as “pink collar.” Pink collar is such a stupid term, and I’m one of those weird women who actually likes the color pink. Also? Cam’ron made guys wearing pink a thing 10 years ago. Cute pithy phrases with a nod to old gender stereotypes are all bad. I think TIME magazine has it right: we should just retire the phrase “pink collar,” since it’s condescending. And we know that the last thing society wants to be to women who work is condescending. Amy Tennery provides a brief history of the term and its context:

“Pink Collar Workers,” which was nominated for a National Book Award, claimed that the majority of American women, despite the women’s movement, remain as segregated occupationally as they were at the turn of the century. It argued that women are still trapped in traditional jobs as waitresses and secretaries, in which pay is consistently inferior to men’s. Pink-collar = “trapped.” Yikes…
“Pink collar” is a way of classifying what work a woman “should” have—and it retains an uncomfortable origin, one that belittles those careers and the men who buck tradition and choose to pursue them.

What do you think of the trend of men doing traditionally women’s work? Are you irritated by the way it’s framed in popular culture and mass media?

Previously: The False Conflict of Work, Feminism, and Motherhood, A Lady Business Guide to Social Media

Oh yes, Ms. Sanders, I am irritated. Firstly, these 'New American jobs' are clearly not new at all. Why does the legitimacy of a job depend upon it being occupied by a man? Why are these jobs considered new? Could it be because now, since they are held by men, they actually can lead to advancement in the workplace and livable wages? (gah!!)
All this nudge-nudge-wink-wink 'if a woman can do it, a man can do it' just makes me think of an old boys' club smoking room filled with white-haired men with cigars, 'those silly women with their silly day-time hobbies. We'll make jobs out of those positions yet.' Oh, we could go on. Love the blog, love the thinking. Love getting things off my chest.

And it's wonderful to know that someone else envisioned the boys' club smoking room, too. That quote about if a woman can do it, a man can, totally made me want to vomit. I think the kid was being sincere, but it did have a nudge nudge quality to it because the reporter made a point of highlighting the irony.

This article is also REALLY annoying for reasons that sociologial images can break down much better than I can...

gotta say that picture of Loki is HUGE and dominating for something that has nothing to do with the article. the only reason I clicked was because I was so confused. I mean unless you want to start making insinuations about a canonically transgender character doing traditionally women's... villainy.

I don't understand the reference at all (which is OK, not all pop culture references are going to resonate with everyone), but even if I did I'm not sure I'd like a big photo of something tangential in the middle of an otherwise interesting article.

Sigh. You're right. I could look at Tom Hiddleston all day, but you're still right.

The glass escalator comment made me think about the glass elevator in the Avengers.
And while I think blocks of text are fantastic, I try to break them up as a blogger because I like to look at images to give my brain a break.

But...noted! Some people hated it.

On the one hand, good for the guys who don't feel they need a "manly" job. On the other hand, it's pretty patronizing for it to be talked about in this way.

I agree completely with Julia that these aren't new jobs and men talking about them like they've discovered El Dorado is ridiculous.

While there isn't growth in the field for librarians, the fact that it is a career chosen predominantly by females is well documented...as is the fact that men who do go into the field are frequently given higher salaries and promoted faster. And, if we listen to the politicians, if we demand to be paid the same as our male counterparts, it will place an undue burden on the employers. We can't expect them to pay the same wage for the same work if they can get away with paying less...I just get so mad...

When I showed up and it seemed like 90+ percent of the students in my program were women.
The men were almost always "tracked" (the best way I can think of to phrase it) into the information architecture/higher paying concentrations. I think during the 3 years I studies, I met two male academic librarians. And there are actually quite a few male librarians in Austin's public libraries. Anyway, when it occurred to me that the way libraries are structured didn't quite work for me, I stopped pursuing them altogether.

Relevant: Fists Up! Workers at Babeland NYC Vote to Unionize 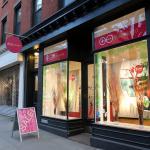 by Amelia Ayrelan Iuvino
Workers hope that joining the union and negotiating a contract will provide added job security and allow them to raise concerns about workplace harassment without fear of retaliation.