Lady Business: The False Conflict of Work, Feminism, and Motherhood

Feminists at work, whether they are mothers or not, have yet to reconcile several conflicts related to class, race, and culture. Most conversations about women in the workplace fall along two lines: they are single and ruthless, or they are coupled and supported outside of corporate work by a partner who helps them tend to family life. I have a feeling that there are many more working feminists who get left out of the discussion, though I can’t figure out why that is.

Amy Allen, writing for the Stone blog at the New York Times, did a good job of approaching the nuances of this discussion in her recent piece, “‘Mommy Wars’ Redux: A False Conflict.”

Much work in second wave feminist theory of the 1970s and 1980s converged around a diagnosis of the cultural value system that underpins patriarchal societies.  Feminists argued that the fundamental value structure of such societies rests on a series of conceptual dichotomies: reason vs. emotion; culture vs. nature; mind vs. body; and public vs. private.  In patriarchal societies, they argued, these oppositions are not merely distinctions — they are implicit hierarchies, with reason valued over emotion, culture over nature, and so on.” Allen writes that some feminists “argued that the best solution was for women to claim the values traditionally associated with masculinity for themselves…Other feminists, by contrast, argued that this liberal assimilationist approach failed to challenge the deeply problematic value structure that associated femininity with inferiority…While both of these strategies have their merits, they also share a common flaw, which is that they leave the basic conceptual dichotomies intact.

I would add that those conceptual dichotomies often leave out racial and class-based divisions that undermine the work of feminism in an increasingly multiracial and class-conscious society. Allen nods at this by noting that discussions of feminism seem to boil down to questions of choice, which is problematic since, “framing the mommy wars in terms of choice is not just that only highly educated, affluent, mostly white women have a genuine choice about whether to become uber moms…the problem is also that under current social, economic and cultural conditions, no matter what one chooses, there will be costs.”

During the discussion here about motherhood and debt, a married woman of color who is not a mother noted that most of the women who responded were women who could afford to opt out of work if they wanted to, usually because they had the support of male breadwinners. This is what Allen meant when she wrote that the ways that educational, racial, and economic privilege structure women’s choices is serious and must not be overlooked.

I told my friend that I always assume working-class women—and women of color in particular—who are navigating these choices are so busy doing the work of being women with limited choices in the world and paying for the costs of whatever those choices are that they don’t have the time or inclination to weigh in on discussions like these. Just having the conversation is its own privilege, in other words.

But this idea of a false conflict is an important one, since the internal conflict in feminism now seems to be that working women who have the most to gain from the necessary work of eliminating remaining racial and class silos among women are largely absent from the debates, articles, and commentary that claim to reflect their realities. The false conflict of public work conducted by women and the private work of motherhood, then, remains a conversation that is dominated by the concerns of white mothers in our culture. Is the idea that if they can make gains, the rest of us will benefit even if we’re not a part of the conversation?

Previously: A Lady Business Guide to Social Media, The Myth of Free Work

At Boston Review, Rebecca Tuhus-Dubrow has some insight on this issue, and addresses the aspects of motherhood / parenthood paranoia that stems directly from class concerns: http://www.bostonreview.net/BR37.4/rebecca_tuhus-dubrow_motherhood_breas...

I'll have to check that out. I think "parenthood paranoia" is a really interesting phrase.

I think your final question is such an important one. And of course, it's a complicated and unlinear issue. But, for me, I believe that the only way for a marginalized or 'unavailable for the conversation' group of people (women) can be released from their own source of oppression is from listening to them, hearing their voice. It isn't fair that the privileged are the ones weighing in, but it is necessity if the conversation is to be had at all. But ultimately, I maintain that the powerless cannot uproot themselves under the same process as the more powerful. But, jeepers, its all a constant cycling back and forth, huh?

And ultimately there has to be a connection between the privileged women and voices that are heard and those who are not. Without it, the cycle continues.

A very revealing factor in all this is, in my opinion, is women in the military. Dealing with built-in sexism (and even outright misogyny) is hard enough in any service division, and is an incredible obstacle for all enlisted women. And this is only compacted by policy that STILL believes that women must be protected from the front lines. The conventional patriarchy feels that the "ladies" need special protections, especially as potential mothers, entirely because such ptriarchy views women as nothing but baby machines--a tool for bolstering our domestic "useful" population As though women can't deliver everything needed all by themselves. It's disgusting and wrong. A HUMAN BEING who wants to fulfill their passion and knack should never, ever be denied for something so utterly petty as their sex.

As though women can't deliver everything needed all by themselves.

Which I think is the insinuation across public/private spheres and very insightful.

I think I might be missing the meaning of this phrase...

I'm in the military and, in one sense, I can't deliver everything by myself: I'm also a single mom.

The Army does need to get over itself about keeping women out of combat--on an asymmetric battlefield, this idea is ludicrous. But, one thing the Army (and the Department of Defense as a whole) does very, very well is subsidized daycare. Because I had a child as a captain who was married (at the time) to another captain and then a major on my own, I was always in the top income bracket and paid the highest rate for military daycare which varied by facility; however, even then, it was hundreds of dollars a month less than my civilian friends with infants and toddlers(what I paid ranged from $425-$625/month for up to 60 hours/week vs. $700-900+ that my friends reported for full-day care, about 45-50 hours/week). What's more, the daycare at the three places I used it (West Point, NY; Montgomery, AL; and El Paso, TX) was high quality and I had no qualms about the care my child received at any of those facilities.

So, no, I could not have taken care of my child by myself and kept a career I was well-suited for, and I feel lucky that she had such great care-givers along the way. The military does daycare so well because they have to: the care of children directly affects the readiness of the solider, and by extension, the unit.

But maybe, lucky isn't what I should be feeling--I think all parents should be entitled to have quality, affordable daycare and perhaps the military can serve as a model of how the government is already doing it for a certain population.

As a child psychologist and a mom, I've spent lots of time discussing what I think is "wrong" with our generation of parents (myself included). Here's one of the biggest differences that I think exists and that is that we are the generation who have all been to therapy and blame our parents for our mistakes. So, when the table is turned and we have children of our own, we are terrified of "damaging" them in the way we feel our parents "damaged" us. I talk more about it here:
http://www.themommypsychologist.com/2012/02/26/whats-wrong-with-us/

On this exciting subject, I try to post to my blogs as if I’m speaking to an individual or talking to the reader directly as I imagine it helps engage the various readers a good deal far more than writing content material formally particularly when my weblog is based on goings ons, daily thought processes and research for this somewhat controversial subject. I discovered that I even so want to use more with the techniques you've got mentioned in this posting.

Relevant: "The Intern" Should Be Called "Lean In: The Movie" 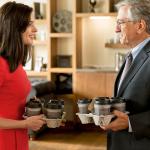 by Grace Manger
Anne Hathaway and Robert De Niro star in the film about a young CEO finding her way.