Lady Liquor: Getting Out the Vote, Filling Up the Hip Flask, and Teaching Little Johnny to Drink | Bitch Media

Lady Liquor: Getting Out the Vote, Filling Up the Hip Flask, and Teaching Little Johnny to Drink

“I charge that these latter-day invading agitators who are preaching prohibition and passing the hat for money are acting in direct violation of the Holy Scriptures, the Declaration of Independence and the Constitution of the United States. It has gone so far that the President of the United States cannot possibly accept our demand for the full and free enfranchisement of all women, because he would then have to meet the demands of the Women’s Christian Temperance Union for Nation Wide Prohibition.” — Abigail Scott Duniway

Abigail Scott Duniway was the first woman to register to vote in Multnomah County, Oregon. She also fought for the voting rights of women all over the country, particularly in the Northwest. She campaigned for women’s voting rights in the only two states I’ve ever voted in: Idaho, which adopted women’s suffrage in 1896 just a few years after becoming a state, and Oregon, which voted to give women suffrage 100 years ago yesterday, after no fewer than five failed ballot measures. Since I’m about to walk over to the election office and drop off my ballot, I’d be remiss not to tip my hat not to Duniway and to remind y’all not to take your own (still suckily and unequally enforced, and oftentimes prohibitively difficult) voting rights for granted. Duniway was also one of the most prominent wet suffragists, at a time when one was either a wet voter or a dry one (that is, one voted in favor of keeping booze legal, or to severely restrict public access), and one either favored women’s suffrage or didn’t. Initially, Duniway allied herself with the dry suffragists in the WCTU and other Prohibitionist groups, abstaining from alcohol herself and raising her children as teetotalers. Eventually, she became disillusioned with the movement for Prohibition for a couple of reasons: one was what she called “two kinds of Prohibition.” The first kind of Prohibition, she said, was the intense restriction on women’s behavior she was fighting so hard to reduce; the second was the set of restrictions on men’s behavior her fellow feminists were fighting so hard to enact. She also foresaw that, human nature being what it was, legislated Prohibition would be nearly unenforceable.

And as alluded to in the quote above – and elucidated later in the same address – Duniway’s other reasons for dissociating herself from the Prohibition movement were practical. She knew male politicians and voters were unlikely to support suffrage if its implementation meant increased restrictions on their access to booze; she also knew suffrage campaigns would be more successful if she positioned herself as an ally to hops farmers and saloonkeepers, further pointing out she’d held numerous meetings in saloons, since churches prohibited her from speaking.

Though women – working in broad coalitions on a variety of social justice issues – had been the noisiest advocates for Prohibition since the mid-19th century, it was the male-led, single-issue Anti-Saloon League that finally, successfully lobbied for years to elect dry politicians at the local and national level. They ultimately succeeded, after the passage of local dry measures in states and counties all over the country, at passing the 18th Amendment and the Volstead Act. The ASL was nothing if not shrewd, continuing to ally itself with the WCTU and women’s suffrage organizations while also openly courting the Ku Klux Klan. While the early stirrings of the temperance movement called for a serious, compassionate response to numerous family tragedies, the ASL’s de facto leader, Wayne Wheeler, shrugged indifferently at stories of poisonings from tainted, Prohibition-era booze (often cut with rubbing alcohol or worse): “The person who drinks this industrial alcohol…is a deliberate suicide.”

Once women got the right to vote, they didn’t consistently vote dry, in part because an unintended consequence of Prohibition (working in tandem with the social and economic aftermath of World War I) was that for the first time in U.S. history, drinking was no longer the exclusive provenance of men. Women held or went to parties where alcohol was served, and they also went out to speakeasies. The Women’s Organization for National Prohibition Repeal turned the WCTU’s home-hearth-and-health arguments right back at them, saying, “Children are growing up with a total lack of respect for the Constitution and for the law.” Not everybody reacted with such earnest concern for the youth of America, though. New Yorker writer Lois Long, who covered the 1920s speakeasy scene under the pseudonym Lipstick, wrote that Prohibition might not have been necessary had the children of America learned to drink properly in the first place: “ ‘We will teach the young to drink. There would not be so many embarrassing incidents of young men falling asleep under the nearest potted palm or playing ping-pong with Ming china if little Johnny at the age of six, had been kept in regularly at recess to make up his work because he had failed to manage his pint in Scotch class…’”

I hope that right now, somewhere, there's a high-school girl painting "Wet Suffragette" on the kick-drum of her Bikini Kill cover band.

I've noticed that people occasionally show up on the Internet to blame women for Prohibition and present it as evidence that women can't be trusted to do anything. History nerds for the win! 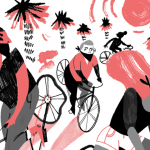