Ah, December. I happen to celebrate – and really like – Christmas, but I’m not immune to holiday stress. What’s not to love about this time of year, really? The flu season? Dealing with travel logistics? Explaining to extended family members that my marital status is none of their business? Facebook arguments about religion and consumerism? It’s enough to make me want to curl up in my bedroom and listen to Pet Sounds (which I maintain is a perfect Christmas album, at least if you’re prone to Seasonal Affective Disorder) until the vernal equinox.

And then there are holiday parties—specifically, work-sponsored ones. Some people love them, some people hate them, some people skip them and some people can’t get enough. I have, at different points in my career, been all of these people. The same goes with after-work happy hours (which were popular at a couple of my former workplaces), networking events for freelancers (which I attend regularly, and which are always held in bars) and parties to celebrate work milestones like product or issue launches.

I’ve been the coworker who never missed a chance to drink with coworkers and I’ve been the one who hated my job so much that the last thing I wanted to do at the end of the day was spend more time with my coworkers. That turned out to be a mistake, though: at my first job out of college, the occasional beer with coworkers kept me sane, but it took me a year to even consider it. One coworker there said I seemed “stuffy” to her, which would have been hilarious to the staff and volunteers at my next job. I drank with them regularly and developed a rep as something of a party girl. During the day, I fended off sexist comments and had to fight to be respected; being known as cool, fun and likeable probably worked against me.

A massively unfair catch-22, that: skipping the office Christmas party and keeping your head down at work can get you the wrong reputation in the office, but so can being known as the lampshader. (While men aren’t immune to this kind of gossip, I frankly don’t hear nearly as much murmured concern that the guy who got too lit last weekend might be a little more committed to the good life than he is to his job.)

And drinking with coworkers can be awkward from a class perspective too: Just as the amount you drink can get you tagged with a certain reputation, so can what you drink, and how much you know about it. (Once a supervisor invited some folks from the department to a “wine and cheese party” which I assumed would be pretty informal, but it turned out to be a formal tasting, led by the boss, in which we spit into really expensive-looking chalices and talked about what other expensive wines we liked, about which I had no data. I learned a couple of things, but wasn’t prepared for the formality of the occasion, and probably look about as relaxed as Richard Nixon at a key party.)

I don’t normally use this space to dispense advice, but it took me long enough to find some balance when it came to socializing in general (and drinking in particular) with coworkers that I feel like passing on what I’ve learned. Apart from knowing your limit and drinking a little less than that (particularly important when drinking with the boss), also remember:

I’m curious about how other people have survived work holiday parties – including teetotalers and folks in recovery. How do you deal with pushy or inappropriate coworkers or bosses? How much do you worry about staying professional, though you’re off the clock?

YES. Thanks for this! And I can't help but recall the flashback in Bridget Jones's Diary when she's drunkenly singing karaoke at her work holiday party, party hat askew, eye on Daniel Cleaver.

I forgot about that! I may have to re-watch the movie -- I forgot what a lush Bridget was.

Is this Cosmo? Because seriously, this looks like some dumb fluff piece they reprint every year.

I don't often read Cosmo, so I can't really answer that, except to say that workplace social events (where alcohol was present) have been a source of some fun and also a great deal of discomfort to me throughout my career, from a class and gender perspective. It's an interesting phenomenon where the decorum we usually observe with coworkers can go out the window; in addition to fumbling myself occasionally, I've been on the receiving end of unwanted passes, had to deal with homophobic jokes, snide remarks about the homeless, etc. as well as the double-edged sword I wrote about in the essay (being perceived as either stuffy and unlikeable or too fun to be taken seriously at work).

I could have taken a removed, sociological/historical approach to writing about Work Holiday Parties As a Phenomenon, which is the approach I've taken for most of this series, but because nearly everybody has to work for a living and will encounter the phenomenon directly at some point, it seemed appropriate to me to take a "service journalism" approach and write about some of these problems in a way that might be useful to other people. It's a well-trod topic, yes, but I think many publications refuse to take seriously sexual harassment and some of the other real problems that can arise in these situations, and that really troubles me.

These are great tips! It is really hard to navigate and what a shame becuase employers really think it is a treat while employees are dreading it. But if you are going, you might as well do it right. I captured a few of your tips in this video http://youtu.be/_MwYUwbFrxw for sharing.

Relevant: One Boy Can Change the World 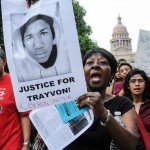 by Victoria Law
This country is full of systems that treat people differently based on their race.