Lady Liquor: Temperance, suffrage and the matter of strange bedfellows

History – maybe especially political history, maybe especially the history of the U.S. – is full of strange bedfellows. Go back in time a few decades, and you’ll find political parties and people espousing seemingly disparate ideas, or battles that seem not just obsolete but adorably quaint now (like whether a candidate favored silver-backed currency or gold, though I understand this still means something to a handful of people in the 21st century – namely, Ron Paul fans). The pairing of women’s suffrage and Prohibition always seemed to me like another quirky historical coupling, an example of the same group of people simultaneously favoring a critical common-sense idea (universal suffrage) and an unbelievably naïve, moralistic solution to society’s problems (Prohibition).

Of course, the reality behind the association of the two is complex: it’s almost certainly the case that the temperance movement (which, true to its dictionary definition, initially advocated the phasing out of hard liquors – the development of which was almost certainly responsible for the rising concern about alcoholism) got more women more interested in participating in public life. It’s also true that women who were already active in the suffrage and abolition movements began to form their own, separate temperance groups for two reasons: first, men’s temperance groups prohibited them from speaking at their meetings (as was the case with Susan B. Anthony and Elizabeth Cady Stanton) and two, they believed as women they had a particular right to be concerned about alcohol use and abuse. As Catherine Gilbert Murdock writes in Domesticating Drink: Men, Women and Alcohol in America, 1870-1940, “Temperance fueled as important a contribution to the woman movement as abolition. Slavery fueled discussion of the innate equality of humans of all races and sexes; intemperance forced consideration of inequality and abuse within the American family.”

It wasn’t until the late 1960s that “the personal is political” became a feminist rallying cry, but the suffragists-cum-Prohibitionists and the Prohibitionists-cum-suffragists of the 19th century were already making an explicit connection between the two. The Women’s Christian Temperance Union – the leading temperance organization for most of the 19th century – advocated for women’s suffrage on the grounds of what she called “home protection”: if women had a voice in the way states controlled liquor, WCTU President Frances Willard argued, they’d be in a better position to keep their homes and families dry.

Some historians read that as sharp maneuvering on Willard’s part: framing suffrage as a moral, domestic matter made it palatable to the more conservative “average woman” who might have felt threatened or suspicious of the suffrage movement as a whole. The notion of women as the natural upholders of morality was certainly less controversial than the notion of women as potential social and economic equals, and the rhetoric of the 19th-century Temperance movement is laced with it.

In her autobiography, Carry Nation draws an astute analogy between the prevalence of photos of nude women in saloons, and the way alcohol “strips women bare” either in the abuse or financial degradation they experienced at the hands of alcoholic husbands or sons; in the same paragraph she tut-tuts that saloons aren’t fit places for women to be “with their clothes on.” She also described herself as a “bulldog for Christ, running along at his heels and barking at what he doesn’t like” and greeted saloon owners with a jaunty, “Good morning, destroyer of men’s souls.” For that reason – though her contemporaries in the movement gradually dissociated themselves with her – Nation serves as a perfect representative of Temperance to modern readers: cartoonish, sanctimonious, intolerant, maybe the first straw feminist. Both a superstar and the butt of numerous jokes in her time, Nation ultimately descended into self-parody: after her celebrity faded, began selling monogrammed hatchet brooches (presaging legions of washed-up superstars to come). She puts one more in mind of the 21st century religious right than the contemporary progressive movement.

Still, homes did need protection – not from alcohol itself, but from its myriad effects, which were more strongly felt during the 19th century, as people drank more and harder alcohol (distilled spirits being relatively new at the time) than they did post-Prohibition, and certainly more than is socially acceptable now. Nation herself lost her first husband to acute alcoholism less than a year after they were married. Women whose husbands abused them – or just spent the grocery money on liquor – were rarely granted divorces, and had few ways to support themselves (and could not own property) if they did manage to leave, or were widowed.

While Nation was destroying bars and intimidating saloonkeepers into closing up shop, the Prohibition movement as a whole as pushing a broader progressive agenda that also served to protect women, families and vulnerable people. Willard and the WCTU also pushed for stricter anti-rape laws, protections against child abuse, free lunches, better municipal sanitation and worker’s rights. They had some success, both due to slow gains in women’s suffrage across the U.S., and due to the cultural shifts it brought about. Judges became more likely to grant divorces, even in cases where severe physical cruelty could not be proven; drinking fountains dispensing clean water are still ubiquitous.

Still, as we’ll see tomorrow, suffragists themselves were hardly of one mind about alcohol – and once women got the vote, they didn’t vote dry as a bloc. But it can’t truthfully be said that the temperance movement was grounded solely in naïve moralizing, without concern for larger issues of health and social justice. Peel back the covers, and its strange bedfellows aren’t that strange at all.

Minor point: I think distilled spirits consumption increased during Prohibition and continued with the country's new found obsession with cocktails, increasingly prepared at home and served in gender mixed company, compared to the pre-Prohibition and 19th Century preference for beer consumed at a tavern, mostly by men. 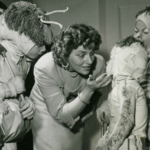 by Gabrielle Moss
Most comedy fans don't know that improv was created by a female social worker.