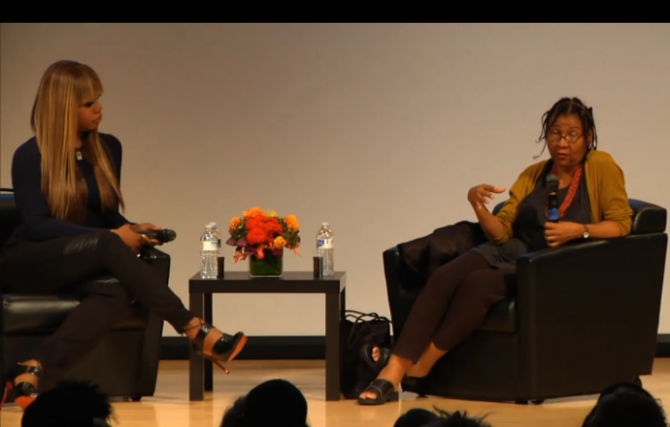 bell hooks is a scholar-in-residence at the New School in New York City this month and this week talked with none other than Laverne Cox in front of a packed crowd.

The conversation was a rare and honest discussion of race, gender, and pop culture. hooks explained that she was interested in talking to Cox because she wanted to see how her feminist theory is affecting people outside of academia. “People read bell hooks and write their papers and have their discussions. When I heard through the grapevine that Laverne Cox was a big bell hooks reader, I thought, I this is somebody I need to talk with,” said hooks. Working as a black trans woman in Hollywood is inherently complicated, added hooks: “She has an awareness of the need to decolonize, but still working within a very colonizing system.”

For her part, Cox explained that hooks’ book Teaching to Trangress changed her life:

“You were writing about unessentialized ideas about what is a woman, you were moving away from these ideas of essentialized womanhood that held feminism back. I found myself there, as a gender-nonconforming college student. I was not quite able to accept my womanhood, but I was able to say, ‘Maybe there’s a space for me here.’ I was able to draw links between the bullying I was experiencing in my own life and the violence I was experiencing as a gender-nonconforming person and how that was an attack on femininity. It made me realize as a college student that we cannot talk about ending homophobia without talking about ending patriarchy, we cannot talk about ending transphobia without talking about ending patriarchy. I love that you talked about pop culture, the space that I longed to be in—but not uncritically. When I read a script now, so much of your work has influenced the way I read scripts and the way I read images.”

hooks voiced criticism of the show Orange is the New Black, saying that the backstories of the characters “seduce you into thinking that there is a kind humanity operating” where there is actually a lot of cruelness being acted out. Cox explained that the show has helped her feel comfortable speaking about race and oppression in public. When Cox first started getting famous, she said, her friend Janet Mock pointed out, “You speak so eloquently about race and yet you so rarely talk about it publicly.” That made Cox realize she was afraid to use her public platform to talk about race. “I was painfully aware that it scares me to go on national television and use the phrase ‘imperialist white supremacist capitalist patriarchy.’ I was like, ‘I’m already black and trans, this is enough for people. I can’t be too political.’” Cox went on to say that because Orange is the New Black is set in a prison, it’s inherently political. That gave her a chance to start talking about politics in interviews. “I was like, ‘Okay, I can talk about incarceration, I can talk about race.’ It gave me permission to go there. I found the more I go there, the more I’m connecting with a lot of folks and a lot of folks are hearing truth in that,” said Cox.

The conversation went in a lot of interesting directions, but later turned to Cox’s expression of femininity.  “One of the issues I think that many people have with trans women is the sense of a traditional femininity being called out and reveled in—a femininity that many feminist women feel, ‘Oh, we’ve been trying to get away from that,’” said hooks.

Cox had a thoughtful response that ended with, “Am I feeding into the patriarchal gaze in my blond wigs?”

“It’s one of those things where I’m sort of like, here I am,” responded Cox. “If I’m embracing a patriarchal gaze with this presentation, it’s the way that I’ve found something that feels empowering. And I think the really honest answer is that I’ve sort of constructed myself in a way so that I don’t want to disappear… I’ve never been interested in being invisible and erased. So a lot of how I’m negotiating these systems of oppression and trying not to be erased is perhaps by buying into and playing into some of the patriarchal gaze and white supremacy.”

Related Reading: Mock and Awe — Janet Mock on Truth-Telling and Writing the Story She’s Been Waiting for Her Whole Life.