Jay Smooth and his cat, telling it like it is.

Jay Smooth (who has been posting two videos a week lately—hooray!) has a new PSA up today on why the media should stop freaking out over Michelle Obama’s love of Beyoncé:

The video is largely in response to this HuffPo article by Kelli Goff. In it, Goff argues that Michelle Obama may have hurt her husband’s 2012 chances when she said that if she could be anyone in the world she’d want to be Beyoncé. Like many people, I was super charmed when I read that, especially since I love the Beyoncé + Michelle Obama Mutual Admiration Society that’s been blowing up the Internet lately. It’s awesome to see two of the coolest women in America support each other and openly admire one another! What’s not to love?

Well, Goff doesn’t exactly love it, saying, “If Beyoncé is making the choice to position herself as a role model for young, impressionable girls, she should keep that in mind the next time she shows up on an internationally photographed red carpet in a see-through gown.” Jay Smooth is calling shenanigans though.

A few choice quotes from his video:

So great, right? I can’t wait until Michelle Obama is the President and she picks Beyoncé as her VP and Jay Smooth as her Secretary of State. Obama/Knowles 2016!

I don't think Beyonce is that great. She should learn how to play an instrument and stop shaking her ass all the time if she wants people to respect her. I voted for Obama and it doesn't change my vote just because Michelle Obama likes Beyonce, I just happen to not like her at all.

Hi there! I'm not sure If you think so, but I don't think that dancing provocatively is something that should be looked down upon. So what if she dances? We shouldn't shame her for it.

To be honest, my first reaction was disappointment all around. It's completely condescending to even ask such a question, "If you could be anyone else, what would you be." What the hell kind of question is that?! I have no idea why reporters seem to be interested in asking women in positions of power some really tone-deaf questions.

I was also a little disappointed in the First Lady. Why not answer the question with, "I'm happy to be me." or some career field that isn't in the entertainment industry. Young black women and especially men, are often implicitly told through the media that the only way to success is to be a singer, rapper, actor, or some sports player. It gets old.

I think the blow-up over a puff interview from People is ridiculous, and the attacks on how Bey presents herself in the original piece were offensive, but the article made some fair points. It's not as if republican talking heads are above using anything they can to tear the Obamas down.

Beyonce presents herself as many pop singers do these days, an odd balance of very sexual yet presenting it in a "classier" way, one minute she does "Countdown, and the next she does "Video Phone". I see no reason not to examine the way she presents herself to the public and how young girls are responding to this image. 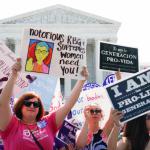 by Sarah Mirk
This decision is a game-changer, say reproductive rights advocates.