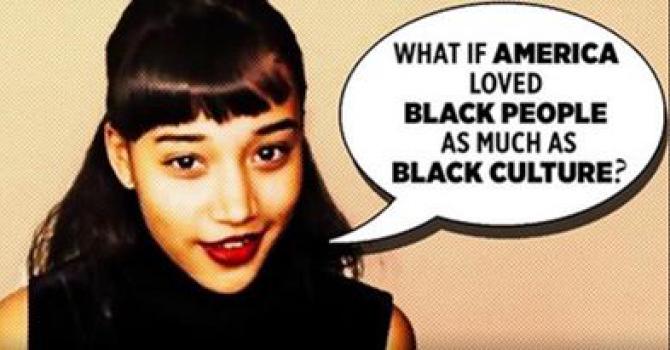 A fan-edited photo of Amandla Stenberg, from her Facebook page.

Amandla Stenberg is best known as a rising Hollywood actress who played the character of the ill-fated Rue in The Hunger Games. But recently, Stenberg has also come into her own as a budding social justice activist.

Finding the ability to carve out your own image—rather than having tabloids carve it for you—is something that many famous women, especially women of color, grapple with when they land in the spotlight. As a 16-year-old star, Stenberg is excellent at using social media to share her political ideas, allowing her to craft her own public identity.

Mainstream media has a terrible track record when it comes to shaping the narratives around young women of color with the same empathy and nuance as their white counterparts. From jokes about their names (think: Quvenzhané Wallis) to persistent racial tropes (think: “Angry Black Woman” commentary on Shonda Rhimes), Black women working in entertainment are often burdened with having to explain their uniqueness. Recently, Stenberg has used her new-found platform to speak out about various social injustices, namely anti-Blackness. In the past year, Stenberg has publicly called out cultural appropriation in music and fashion, police brutality, and the senseless deaths of Eric Garner, Trayvon Martin, and Tamir Rice. If someone’s social media persona is a reflection of their character, then Stenberg is astonishingly wise beyond her years.

In a video for her history class that was posted to Hype Hair’s Youtube channel, Stenberg uses Black hair as a touchstone for a broader discussion of racism. The video, “Don’t Cash Crop my Cornrows,” immediately went viral. The clip clocks in at four minutes and thirty seconds, yet it feels as though she unpacks a lesson that smoothly links hundreds of years of American history.

Granted, Stenberg acknowledges that the video simply skims the surface of a tangled and thorny discussion of white America’s history of discrimination and racism. Nevertheless, she presents a very succinct interpretation of cultural appropriation that explains how big cultural trends express themselves in the form of microaggressions. In her video, Stenberg cites the media-encouraged feud between Harlem-born rapper Azealia Banks and Iggy Azelea, the blonde Australian transplant who was signed to rapper TI’s Grand Hustle record label. Many commentators were quick to cast Banks in the role of the delusional aggressor, yet Stenberg pointed out that Banks’s criticism of Azelea was not unfounded or silly. Using specific visuals, mostly music videos including Kesha’s “Crazy Kids,” where the pop star sports cornrows, chains, and gold teeth, and Katy Perry’s usage of ebonics, braids, and flashing of gang signs in “This is How We Do,” Stenberg defines cultural appropriation as “when a style leads to racist generalizations or stereotypes where it originated, but is deemed as high fashion or funny when the privileged take it for themselves.” She’s able to meld academic discourse with pop culture trends consumed by her peer group.

If you check Stenberg’s various internet footprints, it’s almost easy to understand how she can pack such heavy discussions into digital snapshots. Like many teenagers famous and nonfamous alike, Stenberg’s Tumblr is an extension of her personality. Her page mixes high and low pop culture—paintings by Basquiat share space with quotes by Anais Nin and Zadie Smith. In addition to this mixing of cross-discipline creative works, she regularly highlights her involvement with nonprofit and charity organizations, such as Share Our Strength, which aims to end child hunger in America. Whatever the world throws at her, Stenberg is doing a profound job of defining who she is for herself—and broadcasting her beliefs to fans. 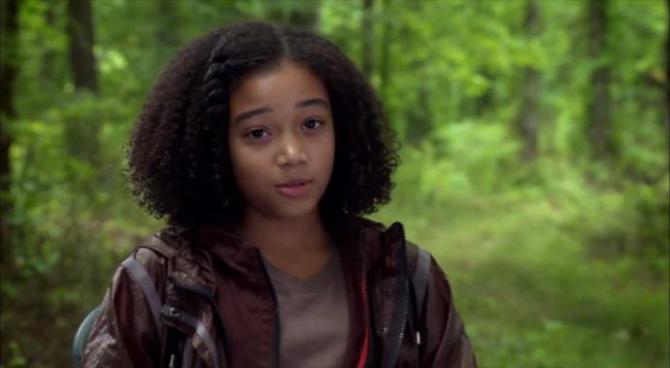 Amandla Stenberg stepped into the international spotlight with her role as Rue in The Hunger Games.

In a 2013 interview with Rookie, Stenberg acknowledges the racist backlash thrown at her during the first Hunger Games film. She says that she “distanced” herself from it but does not shy away from exposing the racist and discriminatory practices of the film industry at large. She says that she’s been often turned down for roles by film industry people who say,  “We’re going in another direction.” That “other direction” turns out to be a girl with blue eyes and blond hair. Not one to dwell on toxicity, she continues:

“I agree that it may be more competitive when you’re an African-American actress, but at the same time, I can almost use [my race] to demonstrate my ability: Since there are fewer roles for African-American women, perhaps I can make a deeper impression. I can feel more special about my roles because I know I’ve worked hard to get where I am and I know that I’m one of the people who have made it.”

In addition to acting, Stenberg has started writing fiction. Earlier this year, the teenager announced that she would be contributing to a new fantasy comic created by Sebastian A. Jones. In The Untamed, the readers meet Niobe Ayutami, a teenager who's half-Wild Elf, half-Elf. 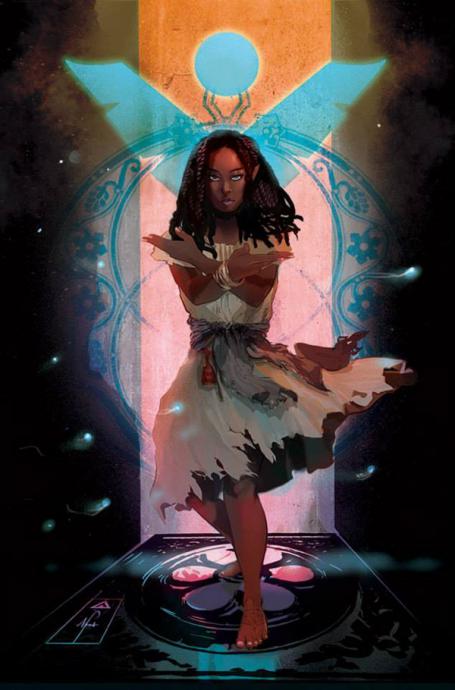 Yes, this is amazing.

Stenberg collaborated with Jones to write a prose book based on Niobe. In an interview with the website Bleeding Cool, the teenager again talks about the importance of diversity and representation in literature and general pop culture. She met Jones at the Mixed-Remixed Festival, where he was reading his multicultural children’s book I Am Mixed. “I was really intrigued by what he was doing—representation in books and media is so important for kids!” says Stenberg. “Being mixed myself, it was really refreshing and exciting to see.” In that interview, Stenberg hints that she’s aware of her status as a role model for her younger fans. She explains, “I think Niobe is a wonderful, nuanced role model. I strive to stay grounded in my roots and spirituality like her, as well as defy gender roles and assert my own power and independence.”

In a pop culture climate where young starlets can get much more attention for their selfies or Twitter feuds rather than their actual work, Amandla Stenberg is a force to be reckoned with. She's an intelligent, talented, thoughtful, and inquisitive teen who doesn’t shrink away from being catapulted into role model status. Amandla, I am right behind you, ready to support whatever creative project you come up with next.