Television and magazine audiences are well aware that the beautiful female faces we see are enhanced with a slew of cosmetics. What audiences don’t seem to take into account is that the men’s faces are also dolled up—the guys just don’t often talk about it.

This creates the impression—both incorrect and damaging—that male celebrities and models don’t undergo the rigorous beauty routines of their female colleagues. How utterly false.

An obvious recent example is Sunday’s season finale of AMC’s The Walking Dead.  We saw male characters whose zombie looks were amply and obviously applied.  But it’s not just in fantasy and science fiction shows where the actors go through the hair and make-up department. As a model, I can assure you that essentially every guy who appears on screen has been carefully preened and groomed.

Last week I was at the house of an acquaintance, a full-time male model and actor who’s been in Hollywood films and international print campaigns.  I was using his bathroom when I saw a tube of liquid concealer on the sink that was the same as mine. Turns out that he uses in both his daily life and on the job. The lack of acknowledgement that men wear makeup, too, creates a dissonance between conceived reality and the truth.   Granted, in my experience, women on photoshoots normally take longer to prep, but the process that both sexes go through is the same.  It’s a damaging cover-up for media consumers to believe that the women need more work than the men to look top-notch.

Much of this misconception stems from modern expectations of masculinity.  Masculine men today aren’t supposed to worry too much about their appearance.  Those that do are made fun of as being “metrosexual,” “gay,” or—my personal favorite—”hipster.”  Masculine men at most gel their hair or give it a brush.  Maybe shave if they feel like it.  If a man talks about his beauty routine, people will probably give him questioning looks.

These pressures mean that fewer male media figures will publicize the fact that they use beauty products, too.   Backstage at a fashion show last month, I noticed that some of the male models needed more time getting their concealer applied than the girls.  Ironically what the public nonetheless sees is an illusion of naturally beautiful men and beautifully made-up women.

It’s marginalizing to continue to view the appearances of media figures—the people we idealize—through separate lenses. The transformation from a regular guy into a supermodel is just as rigorous for men as for women. While we talk a lot about how it’s dangerous for women to compare themselves to made-up models in magazines, I hope folks understand that the male models don’t just roll out of bed and into a Tommy Hilfiger ad.

I’m not calling for more men to start wearing make-up or model themselves after The Jersey Shore’s Pauly D with his elaborate daily blow-dry process.  The point is to recognize that yes, good-looking guys like Zac Efron get help from beauty products just like their female counterparts do.

true true true
so sick of the stereotypical image of men in western culture being the only acceptable one.
anything less than masculine is scrutinised for potentially being gay, because things are just SO black and white *sarcasm*
especially in asian pop culture like kpop and visual kei i guarantee anyone immersed in western culture only would take one look at the males and say 'gay'
ignorance at its finest

God I hate the v-kei and k-pop thing! Whenever someone asks me about my favourite musicians, I say "GazettE" and show them a picture, and they say that I'm emo and tht they ate gay and emo for wearing lipstick. It ticks me off that no one realizes that male celebrities wear tons of makeup too!

Relevant: Bitch in a Box 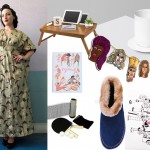 by Andi Zeisler
Show your hermit homies some love with gifts that say “I won’t take it personally that you’ve skipped my Christmas-song karaoke night four years running, and I’ll see you this spring.”