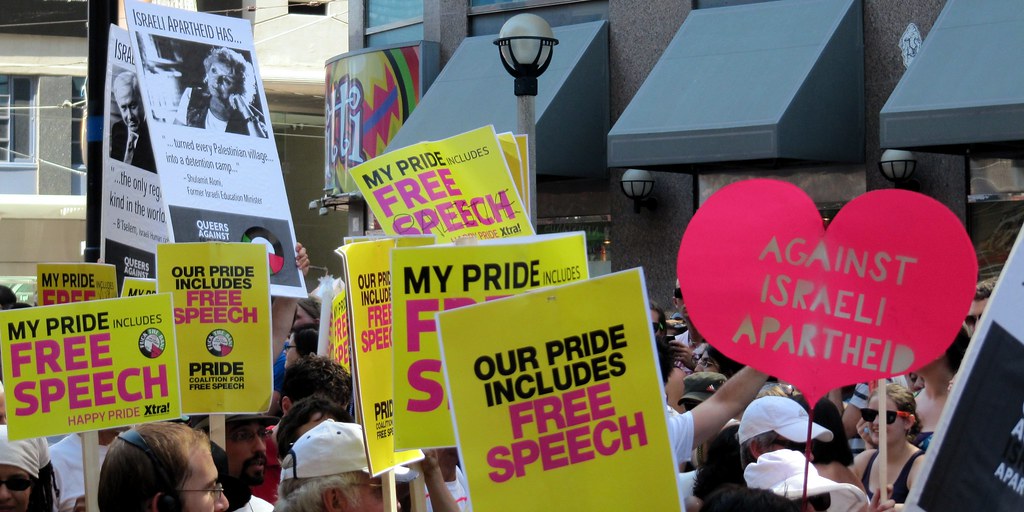 A “Queers Against Israeli Apartheid” protest in Toronto in 2010. Photo via Creative Commons.

Two 2012 films, Out in the Dark and The Invisible Men, have similar plotlines: They center around conflicted love stories between gay Palestinians and Israelis, in which Palestinian protagonists seek refuge in Israeli society. Both were helmed by Israeli directors and sponsored in part by pro-Israel organizations, including the consulate. Both films were screened at the Frameline Film Festival, the world’s longest-running, largest, and most widely recognized LGBT film festival. And both films were protested by Palestinian advocates who believe the films lopsidedly portray Israel as a gay mecca and the West Bank as a dark, dangerous place for queer people.

Many people recognize that the Israeli government’s promotion of itself as a progressive haven for gays and lesbians is a part of its attempt to have the world overlook their policy of apartheid against Palestinians. In reality, Israel has never offered asylum to queer Palestinians who want to enter Israel. Activists also argue that these movies erase the emergence of a gay Palestinian rights movement and organizations such as al-Qaws, a group comprised of Palestinian lesbians living on the “wrong” side of Israel’s barrier wall. Activists are calling this “pinkwashing”: a deliberate strategy to conceal the continuing violations of Palestinians’ human rights behind an image of modernity signified by Israeli gay life. Not too long before Frameline screened Out in the Dark and The Invisible Men, a leaked document revealed that Frameline collaborated with the Israeli Consulate and the Jewish Community Federation of San Francisco to counteract anti-occupation protests that have dogged the festival for years. 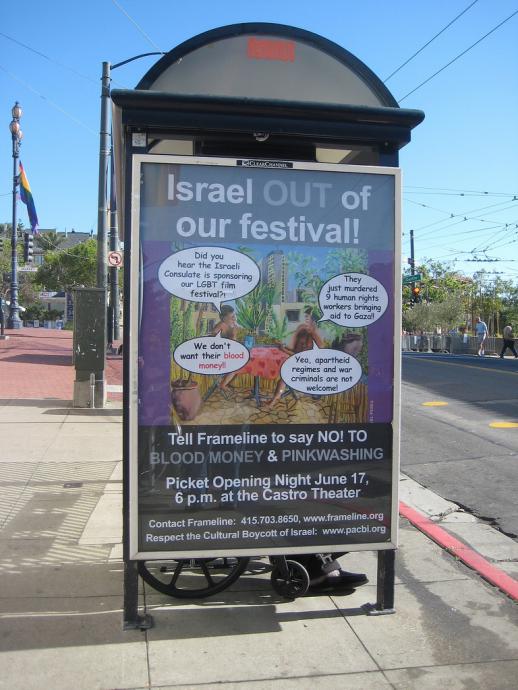 Every year, those protests by groups like Queers Undermining Israeli Terrorism (QUIT) grow larger and more insistent. Their demand of Frameline is simple: stop taking funding from the Israeli consulate and cut ties with an oppressive regime. But this year, for the first time, a coalition of filmmakers and activist groups have planned an alternative LGBT film festival, Outside the Frame, to run this coming weekend, the same time as Frameline. The Israeli consulate is not sponsoring Frameline this year because no feature-length Israeli film is in the 2015 lineup. However, several short Israeli films are part of this year’s program.

Outside the Frame is organized by QUIT and by several other activist and arts groups including the Queer Women of Color Film Festival, which recently announced it would end its longtime relationship with Frameline. The festival will show films from directors who have boycotted or pulled their films from Frameline, like Dean Spade’s new feature documentary Pinkwashing Exposed: Seattle Fights Back, which is about a successful anti-pinkwashing campaign that resulted in the cancellation of an Israeli-funded event in Seattle.

Like Spade’s documentary shows, pinkwashing isn’t just a problem with Frameline. Funding feel-good Israeli-made films for international screenings is one of the major tactics of Brand Israel, a collaboration between several public relations firms that include the Israeli consulate and A Wider Bridge, a pro-Israel organization that produces Israel-centric LGBT events both in Israel and the United States. And Israel deliberately touts certain policies that its supporters say make it gay-friendly when compared to other Middle Eastern regimes. Legally, gay people can serve openly in Israel’s conscripted military, for example. (We won’t get into the question of whether or not participating in militarism can be considered progressive.) But even in the supposed Israeli “gay capital” of Tel Aviv, violence against LGBTQ people persists.

Many LGBTQ people in Palestine are actively trying to dispel the myth that all Palestinians are interested in being “rescued” and assimilated into Israeli society. Philosopher Judith Butler, academic and Black power icon Angela Davis, The Color Purple author Alice Walker, and dozens of queer filmmakers well-known to gay audiences—like Susan Stryker of Screaming Queens, Annalise Ophelian of Diagnosing Difference, and Eric A. Stanley and Chris Vargas of Homotopia—have all called on Frameline to discontinue its connections with the consulate.

All of these campaigns are part of the larger Palestine boycott/divestment/sanctions movement, which looks to South African anti-apartheid campaigning from the 1960s-1990s as a model. But Israel and its supporters (including the Obama Administration, which hands over $3 billion in military aid every year—the largest aid package that the American goverment gives away) have resources that activists just can’t compete with. You can always depend on outspoken gay Zionists, notably gay porn king Michael Lucas, to undercut legitimate charges of pinkwashing. In 2011, Lucas used his mainstream media connections at gay outlets like The Advocate and Out magazine to call for the cancellation of an event on Israel Apartheid at New York City’s LGBT Center.

Despite this, the creative work of anti-pinkwashing shows that activism on a shoestring budget can produce real progress. Selma Al-Aswad, a Palestinian American who organizes with Seattle Queers United Against Israeli Apartheid says she’s “never been more hopeful” that Palestinian liberation could be a reality in her lifetime. Filmmaker Dean Spade put it well in our recent conversation for Truthout: “As activists working to dismantle racism, militarism, and heteropatriarchy know well, the corporate media drastically misrepresents the issues and our responses to them. Supporting independent journalism and making our own media is essential.” In the face of well-armed, highly-resourced oppressors, creating our own culture matters.

Oriented (2015), a documentary by Jake Witzenfeld was just screened at Sheffield Doc/Fest (UK). It offers perspectives of a group of Palestinian lesbians and gays who live in Israel, showing how they negotiate their lives, politics, relationships (with each other and with Israeli Jews). Interesting as a counterbalance?
https://sheffdocfest.com/films/5764

<p>Point of clarification: Al Qaws, is not, as you described it, an organization of Palestinian lesbians "living on the "wrong" side of Israel's barrier wall." Perhaps you are thinking of <a href="http://www.aswatgroup.org/en/content/who-we-are">Aswat</a>? AlQaws is composed of LGBTQ Palestinians of a range of genders and sexual orientations living on both sides of the wall, as well as in Gaza, and they have meetings, events, and parties from Ramallah to Jerusalem to Yafo.</p><p>Aswat, which is composed of Palestinian lesbian, bi, queer, and/or trans women, also has members living on both sides of the wall and in Gaza.&nbsp;</p>

Point of clarification: Al Qaws, is not, as you described it, an organization of Palestinian lesbians "living on the "wrong" side of Israel's barrier wall." Perhaps you are thinking of Aswat? AlQaws is composed of LGBTQ Palestinians of a range of genders and sexual orientations living on both sides of the wall, as well as in Gaza, and they have meetings, events, and parties from Ramallah to Jerusalem to Yafo.

Aswat, which is composed of Palestinian lesbian, bi, queer, and/or trans women, also has members living on both sides of the wall and in Gaza.

Thanks for this correction. After checking with the author of this article, we made the correction you suggested.

Thanks for this correction. After checking with the author of this article, we made the correction you suggested.