Did you know the American Library Association has a Feminist Task Force? Of course they do. Each year, a group of people from this task force undertake a mission called the Amelia Bloomer Project where they name the best feminist books of the year for young readers.

On Sunday, January 26, the Amelia Bloomer Project released their top ten picks from 2013. The list is a resource for libraries stocking up on new books, but it’s also a handy guide for parents or anyone looking to buy good books for kids.

Determining what counts as a feminist book for readers ages zero to 18 is certainly complicated.  The Amelia Bloomer Project explains that the books they highlight don’t just focus on tough girls, but have some emphasis on the big systemic problems that create inequality:

“Feminist books for young readers must move beyond merely ‘spunky’ and ‘feisty’ young women, beyond characters and people who fight to protect themselves without furthering rights for other women. Feminist books show women overcoming the obstacles of intersecting forces of race, gender, and class, actively shaping their destinies. They break bonds forced by society as they defy stereotypical expectations and show resilience in the face of societal strictures.”

The selection committee reads through dozens of books from the year while asking questions like, “Does the book show an awareness of gender-based inequalities with action to change these inequalities?” and “Do descriptions show the character of the person, or do they concentrate on attractive personal appearances?” If you’re interested in the selection process, read up more on the Amelia Bloomer Project.

Here is their list of 10 great feminist books from the past year:

Global Baby Girls by the Global Fund for Children

Brave Girl: Clara and the Shirtwaist Makers’ Strike of 1909 by Michelle Markel and illustrated by Melissa Sweet

However Long the Night: Molly Melching’s Journey to Help Millions of African Women and Girls Triumph by Aimee Molloy

The Good Girls Revolt: How the Women of Newsweek Sued Their Bosses and Changed the Workplace by Lynn Povich

What Will It Take to Make a Woman President?  by Marianne Schnall

I am Malala: The Girl Who Stood Up for Education and Was Shot by the Taliban by Malala Yousafzai with Christina Lamb

Related Reading: How Do You Find Feminist Children’s Books?

hooray for Rookie! both Rookie Yearbook One and Rookie Yearbook Two are so chock-full of great essays and pieces! I loveeeeeee Rookie so much. thanks for a post about libraries, books, and Rookie, three of my favorite things. <3

Relevant: You Are Not Alone 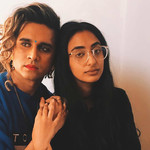 by Rae Gray
Families, in the traditional sense, are largely a cis thing.